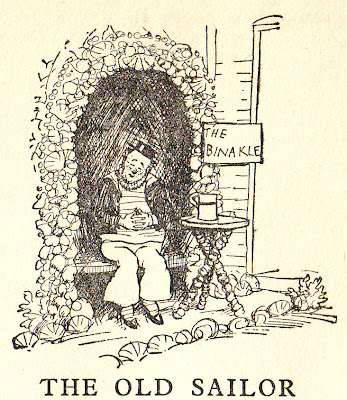 I generally can't stand AA Milne. The pathetically lame Christopher Robin. Winnie the Pooh, and Pooh sticks (infantile scatological names made acceptable by sticking an extra letter on the end, at the level of calling a character Winnie the Shitt). And so on. But I have to accept that The Old Sailor is fine psychological commentary.

There was once an old sailor my grandfather knew
Who had so many things which he wanted to do
That, whenever he thought it was time to begin,
He couldn’t because of the state he was in.

And, thinking of this, he remembered a thing
Which he wanted (for water) and that was a spring;
And he thought that to talk to he’d look for, and keep
(If he found it) a goat, or some chickens and sheep.

Then, because of the weather, he wanted a hut
With a door (to come in by) which opened and shut
(With a jerk, which was useful if snakes were about),
And a very strong lock to keep savages out.

He began on the fish-hooks, and when he’d begun
He decided he couldn’t because of the sun.
So he knew what he ought to begin with, and that
Was to find, or to make, a large sun-stopping hat.

He was making the hat with some leaves from a tree,
When he thought, “I’m as hot as a body can be,
And I’ve nothing to take for my terrible thirst;
So I’ll look for a spring, and I’ll look for it first.”

Then he thought as he started, “Oh, dear and oh, dear!
I’ll be lonely tomorrow with nobody here!”
So he made in his note-book a couple of notes:
“I must first find some chickens” and “No, I mean goats.”

He had just seen a goat (which he knew by the shape)
When he thought, “But I must have boat for escape.
But a boat means a sail, which means needles and thread;
So I’d better sit down and make needles instead.”

He began on a needle, but thought as he worked,
That, if this was an island where savages lurked,
Sitting safe in his hut he’d have nothing to fear,
Whereas now they might suddenly breathe in his ear!

And so in the end he did nothing at all,
But basked on the shingle wrapped up in a shawl.
And I think it was dreadful the way he behaved -
He did nothing but bask until he was saved!

This is very close to home. I knew technically about "chemo brain" aka "chemo fog" aka "post-chemotherapy cognitive impairment", but I hadn't quite imagined that I'd get it. It's real. I don't know the etiology. Theories include effects of the toxicity of chemotherapy drugs; physical effects of the cancer itself; psychological effects of cancer and its treatment; or combinations of the lot.

Whatever: I'm just so slow. If I get kicked into action, I don't think there's any impairment. This afternoon, it become urgent that I do a logo for a local organisation. It took about 35 minutes: use Internet resources to find a forgotten font (using a font-finding service); download it; create the logo to specifications in the GIMP, using that font; save various copies; and send. I'm still thoroughly on form, once I get moving.

But I'd been sitting looking at that job for about three weeks. Every time I saw it, I'd start ... then suddenly divert to having a cup of tea first, or worrying about some other task of around the same priority, or watching Jeremy Kyle, or going all nihilistic and thinking "what does it matter?" and going for a 3-mile walk.

I'm not like this normally. AA Milne is horribly accurate.

There's a lot more in the same vein at The Procrastination Equation.

- Ray
(credits for this post to Clare, for drawing my attention to this poem, and producing the book, which I didn't know we had in the house).
at 16:14