The Wiles of the Wicked

Small world: while Googling the geography of a recent walk (see Microclimate) I ran into a novel with a local setting in part, William Le Queux's 1900 The Wiles of the Wicked. It's a mystery thriller, distinctly far-fetched in some major aspects, that's nevertheless very readable, and intriguing in the puzzle its narrator has to solve. It concerns a man who calls himself Wilford Heaton:

Wilford Heaton is not my real name, for why should I publish it to the world? The reason I do not give it is, first, because I have no desire to be made the object of idle curiosity or speculation, and secondly, although the explanation herein given will clear the honour of one of the most powerful of the Imperial Houses in Europe, I have no wish that my true name should be associated with it. 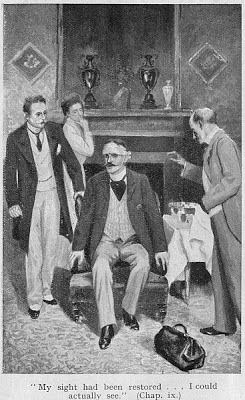 Heaton (or whoever he is) is a young bachelor who is living a fairly dismal life in London after going blind with 'sclerotitis'. One evening, he's run down by a cab, and helped by a young woman into a house, and into a series of unfortunate events, when he hears a voice shouting "Good God! You’ve—why, you’ve killed her!" followed by further scuffles and a stabbed man's corpse falling on to him. Someone prods him with a revolver, and then, evidently satisfied that he's blind and wasn't a witness, goes away and leaves him in the house.

After fumbling his way around the room, he finds his way out of the house and stumbles along various deserted roads until he encounters a constable, saying he's been at the scene of a double murder - except for the problem that he can't identify the location. He wants to give a statement anyway, and demands to see the constable's inspector. He's taken by hansom to the latter, and gives a detailed account of what he can remember, which is quite a lot: details of the layout of the room, the shape of the knife that appeared to be the murder weapon, the ethnic bangles worn by the woman who helped him, and so on. At this point it becomes clear he's not speaking to policeman at all, as he's grabbed, tied up, and dumped in a muddy cellar which appears to have rising water. But then another woman, who will call herself only "Edna", comes to his rescue. She will save him from a muddy death on two conditions: that he never speaks of the events of the night; and that he will obey any instructions that come from a person signed AVEL. He agrees, and is released.

A while later, Heaton gets a visit from a mysterious doctor sent by AVEL, who operates on his eyes and restores his sight. Life gets good, and at a dinner party he meets and falls in love with a young woman called Mabel Anson. He gets mildly suspicious when one of their meetings is arranged by AVEL. But it all takes a scary turn when he's invited to dinner at her mother's house, and recognises the parlour as the murder scene, and Mabel's perfume, Peau d’Espagne, as that of the mysterious Edna who helped him. He discusses Mabel with a fellow dinner guest, Hickman, who invites him back to his lodgings for a whisky and soda. Heaton accepts a cigar, which he finds is drugged, then receives "a stunning blow upon the top of the skull".

Heaton wakes up on the floor with a bleeding head - six years later, in completely different surroundings. He finds himself a rich man in a mansion he owns in Devon, married to an unattractive woman twice his age, with no recollection of how he got to this situation . (In modern terms, he's spent six years in an amnesic fugue). His baffled reaction giving rise to suspicions that he's gone insane, he decides to do a runner and return to London to find out his past, and seek out the real love of his life, Mabel Anson.

There is a rational explanation, if daft.


Sir Henry Blundell, the specialist on mental diseases, explained to me in his consulting-room in Harley Street—the cause of my six lost years. Such an experience, it seemed, was not unknown in medical science, and he made it clear to me that the blow I had accidentally dealt myself in Hickman’s rooms had so altered the balance of my brain—already affected by the cab accident during my blindness—that my intellect stopped like a watch. I lost all knowledge of the past, and from the moment of recovering consciousness commenced an entirely new life. This extended through the long period, nearly six years, until I had struck my head against the marble statue in the drawing-room at Denbury, when my brain, restored again to its normal capacity, lost all impression of events which had occurred during its abnormal state. This, of course, accounted for my extraordinary unconscious life, my inverted tastes, and my parting with the woman I loved so fondly.

The local interest is that the narrator's Devon mansion, the fictional Denbury Court, is just outside Exmouth:


Yes, as I had expected, there was an ordnance map of the Teignmouth district tacked to the wall; and searching, I quickly found Denbury marked upon it, standing on the Exmouth road over the High Land of Orcombe, halfway between that place and Budleigh-Salterton.


All was quiet and peaceful there in the mid-day sunlight. Behind me stood the great white façade of Denbury; before, a little to the right, lay a small village with its white cottages—the village of Littleham, I afterwards discovered—and to the left white cliffs and the blue stretch of the English Channel gleaming through the greenery.

From the avenue I turned and wandered down a by-path to a stile, and there I rested, in full uninterrupted view of the open sea. Deep below was a cove—Littleham Cove, it proved to be—and there, under shelter of the cliffs, a couple of yachts were riding gaily at anchor, while far away upon the clear horizon a dark smoke-trail showed the track of a steamer outward bound.

... but not where he wants to be, so he plots an escape route. avoiding Exmouth in case he's recognised:

Taking up my pen I made a rough sketch-plan of my route, which passed Littleham church, then by the left-hand road struck across country, crossing the high-road to Exmouth at right angles, continuing through the village of Withycombe Raleigh, and keeping straight on until it joined the main road to Exeter. At the commencement of the village of Lympston it was necessary, I saw, to turn sharp to the left, and at the end of the road I should find the station, close to the river Exe.

All this places Denbury Court somewhere in the vicinity of Castle Lane, which runs from Littleham toward Budleigh and (now) behind the Devon Cliffs Holiday Park. The reference to "white cliffs" isn't in error, though the cliffs at Littleham Cove are red: from the High Land of Orcombe, on clear days you can see across Lyme Bay to the chalk cliffs of Hooken and Beer. Withycombe Raleigh has long since been absorbed into the suburbs of Exmouth.

The author William Le Queux (1864-1927) was an Anglo-French journalist and writer who was massively prolific, mostly in the fields of mystery and spy thrillers. As Wikipedia says, he's particularly remembered for his German invasion fantasies - the 1894 The Great War in England in 1897 and the 1906 The Invasion of 1910. It's hard in hindsight to judge if these were prescient, paranoid, or both. Le Queux did get distinctly paranoid during World War One, when he thought the Germans would target him for "rumbling their schemes". Le Queux had a house at Hawson Court, Buckfastleigh, hence his familiarity with Devon. A quick Google finds that Devon locations feature in a number of his books.

Many of Le Queux's works are on the Internet Archive and Project Gutenberg.