The Devonshire Savages: a me-too hatchet job on a Devon rural family from an 1878 edition of London Society, a monthly periodical billed as publishing "light and amusing literature for the hours of relaxation", but which often had features and fiction that were anything but.

This is a well-known story on the Devon history/folklore circuit, but I was surprised to run into a rehash of it in the same volume of London Society that serialised Bertha Thomas's second novel, the 1878 Cressida. The anonymous account of the "Savages" was news a decade old: the equivalent of a tabloid scare story that started in the Times in 1869 and spawned a series of morally outraged accounts of the 'North Devon savages': a Nymet Rowland farming family called the Cheritons. More context at the end: but first, here's the story as London Society tells it.


THE DEVONSHIRE SAVAGES.
BY A NATIVE. 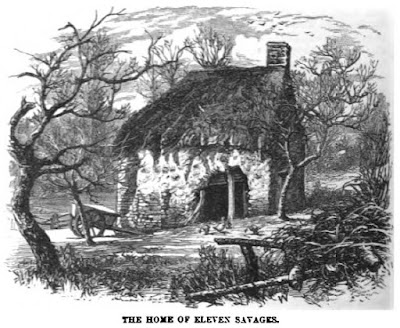 For a compilation of contemporary accounts, see the Devon History Society: The North Devon Savages (November 2009 - I wrote it, so forgive any similarity of phrasing).

The short of it is that the story seems to have launched with a Times piece, "Heathenism in Devonshire" (page 9, November 17, 1869), and particularly escalated with an October 1871 Telegraph expose, "A Family of Savages in Devonshire" (syndicated as far afield as the North Otago Times). There was outraged commentary - the London Society piece is pretty mild - such as that of "Tickler" (George Philip Rigney Pulman) in the Devon Weekly Times (reprinted in the 1870 Devonshire Sketches including Pixy Lore as "... some Account of Ancient and Modern Savages in Devon"). This is turn drew probably libellous correspondence alleging further misdeeds such as incest, going near-naked, and the Cheriton women corrupting, and infecting, the local youth ("to which fact medical men in the neighbourhood can bear revolting testimony"). A few decades later, the Cheritons were fast fading into folklore, but they got a mention in books such as Baring-Gould's An Old English Home and its Dependencies (London: Methuen, 1898, Internet Archive oldenglishhomeit00bariuoft) and Sarah Hewett's Nummits and Crummits : Devonshire customs, characteristics, and folk-lore (London: Thomas Burleigh, 1900, Internet Archive nummitscrummitsd00heweuoft). Peter Christie's 1992 paper is the most complete modern reanalysis, and the abstract says it all:


The 'North Devon Savages' were a notorious family living in the small parish of Nymet Rowland in the nineteenth century whose story has entered the realms of folklore. This study explores the truth behind their reputation and suggests that their notoriety, though based to some extent on fact, was deliberately exagggerated by local landed interests in order to force them off their land.
_ Christie, Peter. 'The true story of the north Devon savages'. Devonshire Association Report and Transactions, 124 (1992), 59-85. ISSN 03097994.

Ultimately the story may come down to a land ownership war conducted by slur, in which the underclass Cheritons were less able to play the media than their rich and well-connected opponents.