The Isle of Wight: in a series of views printed in oil colours (1874)

The Isle of Wight: in a series of views printed in oil colours is the Victorian  equivalent of a coffee-table book, published in 1874 by Thomas Nelson & Sons of London, Edinburgh & New York. I always like these collections, of which the 19th century Isle of Wight supported a huge industry, and the best of them are lusciously printed, showcasing state-of-the-art chromolithography. This is one of the many lovely and otherwise scarce books now downloadable from the Bodleian Library digital collections. 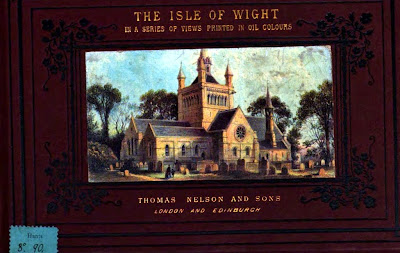 The advert in the Bookseller bills it as:


THE ISLE OF WIGHT. In a series of views printed in oil colours. Twenty-eight Views of Principal Places of Interest. Cloth, bevelled, price 3s. 6d.

Its uncredited editorial introduction has definite literary pretensions, and is peppered with inaccurate poetry quotations ...

"Set in this Eden of all plenteousness"
- Tennyson
- a selective quote from his 1864 narrative poem Enoch Arden, which continues, less idylically, "Dwelt with eternal summer, ill-content".

"Of all the southern isles who holds the highest place,
And evermore hath been the great'st in Britain's grace"
- Drayton
- [a slight misquote - it's "she", not "who" - from the Isle of Wight segment of Michael Drayton's Poly-Olbion]

... but then, the point of the book is the images, and T Nelson does those with great subtlety.

The publication date tracks definitely to August 1874 (it's in the August 1874 new titles list for The Bookseller for 1st September 1874). There's a good bibliographic description at The University of Toronto Libraries library site (see catalogue key 5401607). This includes a little on the printing process ("Chromolithographed plates include areas engraved on a key block and transferred to stone") as well as noting that some of the plates - all of which are uncredited by artist or engraver - were recycled in simpler tinted lithograph form for a later Nelson title, The Isle of Wight: its history, topography, and antiquities (see Internet Archive isleofwightitshi00adam for the 1884 edition). Compare, for instance, these plates of Blackgang Chine:


Anyhow, here are the plates. There are 27; the publishers bumped the count up to 28 by including the cover, which is actually a duplicate of the inside plate of Whippingham Church.

Click any image to enlarge. All images are Google scans and not for commercial re-use. Main file from Bodleian Library, Aleph System Number: 014306177 - available under Creative Commons "CC BY -NC -SA 2.0" license.