The House on the Scar: A Tale of South Devon

I offer Bertha Thomas's 1890 The House on the Scar: A Tale of South Devon as a regional curiosity worth reading if you're into Victorian melodramatic romances. I found it syndicated in the Sydney Mail, starting in the Jan 18, 1890 issue, and it turned out to be in the Internet Archive. Set in the South Hams, Devon, it's one of the few - but apparently popular - novels by the Worcestershire-born author Bertha Thomas (1845-1918). 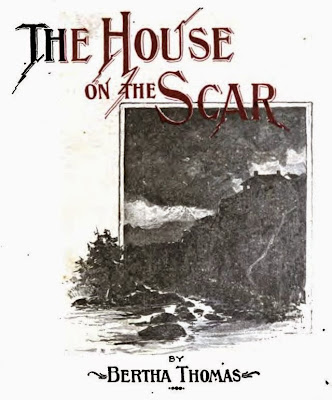 The House on the Scar concerns the worthy-but-gentle artist David "The Owlet" Ferrier, who loves fellow artist Amy Beverley (they both went to "Bexeter" Art School), but she's just not that into him, and falls for and marries the worldly incomer and ex-trader George Elliston, after he saves her from drowning. ("The Mount", the clifftop mansion Elliston buys, is the titular house). Right from the start there are ominous notes, in sightings of a vagrant "nigger sailor" (this was written in those days) and in a visiting missionary's stories of a man called Alexander ("Great Sandy"), a 'Mr Kurtz' style of trader and slaver in the South Seas. Small-town drama kicks off into something more when the sailor, a Samoan called Monkey Ned, turns up and reveals himself as an ex-crewman of Elliston, disgruntled about not being paid. David gets suspicious, especially after catching Elliston on the cliffs with blood on his hands, claiming Ned shot at him.

David's obviously bothered by all this, but doesn't really show it. However, his subconscious is clearly working hard.


He dreamt that he, David Ferrier, was committing a burglary at the Mount, and, breaking into the drawing-room, found Monkey Ned, the Samoan, trying to murder Amy. He sprang on him and held him down; and the livid, contorted, upturned features of the man he was strangling had changed to those of Amy's husband.

So he turns investigator, getting a job in disguise as a country bumpkin, 'Jacob', aboard the yacht Watersprite on Elliston and Amy's honeymoon cruise. When the Watersprite docks at Guernsey, David confronts Amy with what he learned from Monkey Ned: that Elliston is Great Sandy, and intends to kill her. Elliston recruits 'Jacob' for a smuggling side-excursion, and the two run aground on the "Guillemot Rocks", where David reveals himself and confronts Elliston with his certainty that the latter killed Monkey Ned. Their situation, clinging to wreckage, means they can't fight, and Elliston decides to swim for his life; David, finding the tide dropping, manages to get to shore. Subsequently, news reports show that Elliston survived to do a runner, but came to a sticky end at  the hands of New Britain natives who finally got to kill their exploiter. David leaves Orestone to develop his career, and returns in more macho shape, and a better artist, after three years  He and Amy are reconciled, just as friends, and depart into the luminous future as 'art buddies', possibly to marry eventually.

Incidentally, David's art becomes ascendant, and Amy's sidelined into pretty trivia. I'm not sure what the author is doing there: punishing the character for her bad relationship choice?


Amy's genuine interest in his work is an inspiring stimulus, and her acute criticism and invaluable suggestions, always at his service, are touched with genius, that gift of hers of which little more was to come. In painting she confines herself to a modest sphere: little studies of still life by the sea-shore; of marine flowers, sea anemones, madrepores, cup corals, and other beauties of the deep, mostly neglected by artists, to which her hand imparts a curious charm.
The little world around them looks on, and sometimes wonders at this apparently successful instance of a friendship between two persons of opposite sexes. Amy talks confidently of the time to come when they shall be two old fogies—art fogies—still pursuing the same quiet routine as now. Orestone, though it has accustomed itself to the present situation, still prophesies that sooner or later it will end in a match.
But David knows better!

It's a good yarn, though a very strange combination: a rather introspective romance that suddenly cranks up into action thriller. It's also let down by an excess of internal exposition and soul-searching from the protagonist, as well as the ridiculously unbelievable plot device of Elliston not recognising Ferrier aboard the Watersprite. But I enjoyed it overall.

For location-spotters, The House on the Scar is a well-described evocation of the South Hams. The story is peppered with authentic-sounding and real Devon names, such as the fictional "Orestone" (the main location); the fictionalised "Bexeter" (I wonder if Bertha Thomas, who trained as an artist, went to the Exeter School of Art), "Molt Head", "Heather Mill Cove" (three miles from Orestone), and "Roden Down" on the "desolate coast between Orestone and Plymouth"; and the real Malcombe Point (near East Prawle), Dartmouth (said to be ten miles from Orestone), Lannacombe, and Kingsbridge. Orestone itself is described as a tiny hillside town over a harbour where seven creeks meet, with a "long narrow street" with "rambling courts and alleys", 16 miles from a railway station, and with a daily steamer to Kingsbridge. It doesn't appear to be a fictionalised real location, but a very miniaturised hybrid of Salcombe and Dartmouth, planted somewhere on the stretch of the South Hams coast between Prawle Point and Start Point.
If you don't want to waste your life reading it, here are a few contemporary reviews.


"The House on the Scar,” by Bertha Thomas (Sampson Low and Co.), has much of the strength and many of the weaknesses of its kind, but as a love story, is rather disappointing. Amy Beverly is a cleverly drawn heroine. David Ferrier, her admirer, is a highly admirable young man, with profound depths of character and goodness of heart, but withal such a gawky lout that one has to admit his union finally with Amy might be an artistic mistake. The wicked man of the story, George Elliston, is a sort of retired freebooter, who settles down in England, carries Amy by storm, and marries her before David’s own eyes. The account of his speedy relapse into the old lawless habits is perhaps the best part of the story.
- A BATCH OF "LIGHT LITERATURE.", The Pall Mall Gazette (London, England), Friday, August 15, 1890.

“The House on the Scar.” 1 vol. By Bertha Thomas (Sampson Low) is a dish of dullness flavoured with sensation. We have the babble and humdrum level of existence in a seaside village, lifted by a liberal admixture of improbability. The scence of “The House on the Scar” is laid in South Devon. In Oreston [sic] lives pretty Amy, an aesthetic damsel, who has a lover called David. Both are devoted to art. In Amy’s delicate sketches there is a hint of genius; David’s are conscientious, but no more. Poor David resembles his art. He has every solid quality, but he lacks charm and dash. To the village comes a mysterious and wealthy stranger, who is, in truth, “a black birder,” from the South Guinea coast, with a past of blood-curdling exploit. How the bold buccaneer woos and wins Amy, and what comes of it; how poor David submits somewhat tamely to his fate, and broods over his beloved; what the village says of it all; these things make up the story. The best part of the book is to be found toward the close, where there is a realistically-described struggle with the waves of the two shipwrecked men—Amy’s true-hearted lover and her husband.
- NOVELS. Daily News (London, England), Saturday, August 23, 1890.

“The House on the Scar; a Tale of South Devon,” by Bertha Thomas (1 vol.: Sampson Low and Co.) is a variant of the good old story of the young woman with the two lovers—one dull, humble, unselfish, and faithful; the other brilliant, masterful, selfish, and a scoundrel. It need not be told beforehand which of the two Amy prefers. The reader must not think, however, that he is going to be put off with a mere love story. The villain of the piece is sketched on quite a heroic scale—he is a desperate slave trader under the euphemistic title of “labour agent,” in the South Seas; and the last meeting between the rivals is conducted on a lonely rock off the coast of Brittany in ultra-sensational style. There is a deal of lunacy about the characters generally; indeed, we are by no means sure that had “Great Sandy,” the Antipodean nickname of the villain, been tried for the murder which is quite a matter-of-course event in his story, Broadmoor would not have been his fate instead of the gallows. The situations are forced and unnatural enough; but nobody can accuse the characters of being commonplace or the incidents of being tame.
- New Navels [sic], The Graphic (London, England), Saturday, October 4, 1890.

Miss Bertha Thomas has written better novels than 'The House on the Scar.' She has formerly exhibited no little power of characterization, and it is a pity that she should have turned her attention to mystery and adventure, for which she has not shown much aptitude. Her experiment is, moreover, tried too late, for the public rage for tales of this sort shows signs of abating, and novel-readers are developing some sort of taste in these matters, by demanding study from the life and not being so much taken with stories in which plot and action are contrived, so to speak, out of one's head. Miss Thomas, who always writes well, has put plenty of energy, and even swearing, into her story—and indeed the circumstances demanded plenty of both; but lifelike detail and adequacy of human interest are wanting.
- Novels of the week, The Athenaeum, No. 3277, August 16, 1890

The writer has achieved a distinct success in depicting the characters of David, 'the Owlet,' a young artist devoted to his work, and of Amy Beverley, 'a slender, soft- haired maiden,' an ambitious ait student. David thinks he is in love with Amy, but Amy marries an unworthy fellow, Elliston, who, before long, disappears from the country. David and Amy come together again, and vow an eternal Platonic friendship. The story flows on smoothly from beginning to end, enlivened with touches of humour, and pervaded with a decidedly healthy tone.
- The Publishers' Circular and General Record of British and Foreign Literature, Volume 53
, 1890, page 759

Update, 17th May 2015
While looking at the background to this book, I got interested in the author's works, which turned out to be so extremely varied that I compiled a bibliography. See Bertha Thomas: bibliography.