I was inspired to learn Peg o' My Heart while watching the current repeat showing of Dennis Potter's musical psychological drama The Singing Detective. It's amazing how old some of these tunes are: long before its re-use as Potter's theme tune, I remember it as being a classic on the radio in my childhood, and it ultimately tracks back to 1913, when it featured in the Ziegfeld Follies on Broadway.

This is a fairly light busking arrangement; I deliberately avoided the common tendency with accordion arrangements of Peg o' My Heart to bury this very catchy tune in a soup of chords. I loosely based the intro on that of the 1956 Gene Vincent cover. 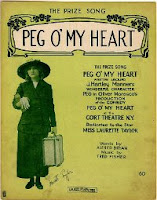 As with a lot of well-remembered popular tunes from the 19th and early 20th century, the piece known as Peg o' My Heart is actually just the refrain of the original. You can see the original score at the Duke University Library's Historic American Music Sheet collection (item a0021). On YouTube, Ted Kloba plays a very nice arrangement of the full version on a Chemnitzer concertina (Peg O' My Heart - credit to Clare for spotting this). I've been practising it this very evening.

"Peg", according to the song sheet refers to "J Hartley Manners' wonderful character Peg in Oliver Morosco's production of the comedy Peg O' My Heart at the Cort Theatre, New York" (John Hartley Manners  was a London-born playwright of Irish extraction). Manners' original text was a romantic but, in places, fairly polemical novel concerning the tribulations in English society of Peg, a poor but feisty Irish-American girl who is born of the romance between "an Irish agitator" and an English lady. She finds she is to inherit a fortune - but only on condition that she doesn't see her father for three years and is trained in English manners by her mother's upmarket family. See Project Gutenberg, E-Text No. 3621.

Getting this video up was a bit of an encouragement. I felt very depressed after last Sunday's Topjam session, because I messed up two of the pieces (possibly not in ways as painfully audible to the audience as to me) through sheer performance anxiety (previously discussed). I start getting into a funk the moment anyone or anything's observing - even the video recorder on the laptop. My previous YouTube bayan videos have generally required a dozen increasingly irritated takes and splicing the best bits together; this time it just took two goes, with no splicing!