Yesterday Clare went to a writing workshop in Salisbury; as my brother-in--law lives there, it was a chance to meet up for a meal, so I came along too, and spent a few hours mooching around the charity shops. It was a perishingly cold day, and began snowing later in the afternoon, so I revisited the cathedral.

It's one of England's iconic cathedrals, and its spire still dominates the views all around the city, just as it did in the days when it was painted by Constable (see here and here) and Turner (see here). Inside, the vaulting gives some marvellous vistas, with Piranesi-style arches-within-arches.

Although his external views are better known, Turner also painted these interiors (see here and here). Other features worth looking at are the Chapter House, which houses one of the four originals of the Magna Carta (no photo, because they don't allow it, but see their webpage) and the Cloister (again no photo, because my camera batteries died - but see Salisbury Cathedral Cloister Garden at Gardenvisit.com).

One feature definitely worth seeing is the new font by the water sculptor William Pye. It's brilliant on every level: religiously, aesthetically, and practically.  For obvious reasons, it's cruciform, and is continuously supplied with water and drained from its four corners - symbolically representing the idea of baptism in "living water". But beyond this, the continuously draining corners - ripples can't reflect there - rapidly damp out surface disturbances, and with the black interior, the water surface is a perfectly smooth reflector for the vaulted ceiling. The effect is dizzying, like looking down into a vast well.  See the Cathedral's press release - Salisbury Cathedral's new font - a modern treasure - and more photos. 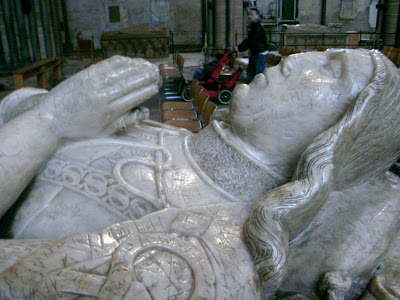 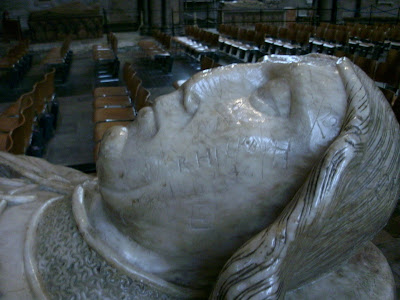 Vandalism tends to be viewed as a modern malady, but for an antidote to that view, check out the tomb of John, Lord Cheney, who died in 1499. His polished marble effigy is heavily scored all over with graffiti, chiefly initials. It's hard to see how, in more religious times, people found the opportunity to do this; deeply scraping your initials on stone isn't something done in an instant.

Addendum: Ah, the stupid! It burns! Angela Williams of Literary Places just sent a photo of similar graffiti on the tomb of Bishop Stafford in Exeter Cathedral, dating from the time of the English Civil War. I didn't see any dates on the Lord Cheney graffiti, but I was subliminally misdirected by seeing "VR" and assuming the damage to be by Victorian-era tourists. But I completely forgot that the tomb is old enough to have existed at the time of the Dissolution of the Monasteries in the 1500s, and the English Civil War of the 1600s, both of which times saw vandalism of religious artifacts. Salisbury was occupied by the Parliamentarian army in the winter of 1644, and there's some evidence of anti-icon damage and theft from the Cathedral in this period (though not necessarily as much as commonly associated with Cromwell's reputation) - see Who destroyed the images at the west end of Salisbury Cathedral?, page 119, The Wiltshire Archaeological and Natural History Magazine, Volume 3, 1857.