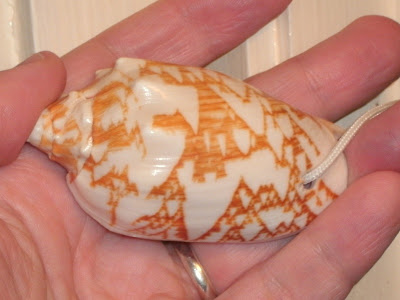 We just had our bathroom renovated, and this rather nice seashell is hanging on the light pull-cord. I got it a while back at B&Q as a curiosity, but this is the use they were selling it for. I forget the country of origin - somewhere Indo-Pacific - but I recall the label said these particular B&Q ones were produced on a sustainable basis; the molluscs are used for food, and the empty shells sold as decorative objects or collector's pieces.

The particularly neat thing about this one is the pattern: a classic example of pattern-forming processes that have been successfully analysed mathematically. The mollusc, when it's alive, has a mantle whose edge contains cells that deposit pigment on the shell lip as it grows. These cells interact with their neighbours - they can switch on and switch off each others' pigment-making according to well-defined conditions - so the whole band of cells has a dynamically-changing linear pattern of pigment production; and as the shell grows, a record of that pattern is left behind.

One of the classic expositions of the theory on this is Hans Meinhardt's The Algorithmic Beauty of Sea Shells (Springer, 4th ed. 2009, ISBN  978-3-540-92141-7). Meinhardt analyses the patterns in terms of hormone diffusion, successfully simulating the patterns on a range of shells. As part of Springer's Virtual Laboratory series, it comes with companion software for playing with the simulations. If the maths is not of substantial interest to you, it's still a compendium of beautifully -photographed shells - although at nearly £40 it's rather expensive as a coffee-table book. Springer have an online preview: see the intro page and reader.

Whatever 'computational engine' drives the pattern changes on the shells is effectively a close analogue equivalent of the digital algorithmic device called a one-dimensional cellular automaton (you can play with an applet here). The outputs are very similar in appearance, and one celebrated example, Cymbiola innexa, displays Sierpinski triangles, a classic fractal pattern produced by many 1D cellular automata.

The rather peculiar aspect is - what function do these patterns serve? In many species of mollusc, the patterns aren't visible during life, as they're covered by a dull-coloured protective "periostracum", so camouflage or identification (the usual reasons for animal patterns) don't seem to apply. Do they have a function we don't yet know? Are they fossils of a past function that's better served by the tough periostracum? Or are they "spandrels" (the term borrowed from architecture by Gould and Lewontin for non-adaptive by-products of other adaptively evolved functions)?