TAKE OFF THIS WRAPPER NOW 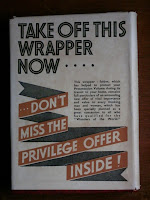 A piece of bygone marketing material from a 1930s edition of Wonders of the World ("a popular and authentic account of the marvels of nature and of man as they exist to-day" from Odhams Press, Long Acre, London). The wrapper, rather being than a decorative cover for the book itself, consists entirely of agressive marketing for another book in the series.

TAKE OFF THIS WRAPPER NOW ... DON'T MISS THE PRIVILEGE OFFER INSIDE!
This wrapper-folder, which has helped to protect your Presentation Volume during its transit to your home, contains full particulars of an astounding new offer of vital importance and value to every thinking man and woman, which has been specially planned as a great concession to all who have qualified for the "Wonders of the World." 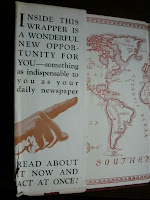 The offer is the option to examine on free approval (but not quite - it's a shilling postage per book) "this magnificent New Pictorial Atlas of the World" and "as an additional privilege" editions of The New Treasury of Verse and The Holy Bible. The books themselves cost £6/- each, or £8/6d for the De Luxe editions. I well remember Wonders of the World from my childhood. The edition we had was probably the 1911 one, which is on the Internet Archive (ID wondersofworldpo00hutcrich), the authorship credited to "eminent travellers including Sir Harry Johnston, G.C.M.G., K.C.B., Alan H Burgoyne M.P., F.R.G.S., Perceval Landon, J. Thomson, F.R.G.S. and many others". It's worth reading for its glimpse into the exotic parts of the world in a period when relatively few people travelled and sensibilities were different: for example, in the days when the Mummies of Guanajuato (below) were simply propped up in the catacombs.


The later edition the advertising wrapper came from is undated, but from internal clues I guess it to be mid-1930s (for instance, Bernhard Hoetger's wonderful 1931 House Atlantis in Bremen is featured, but there's no reference to World War 2). 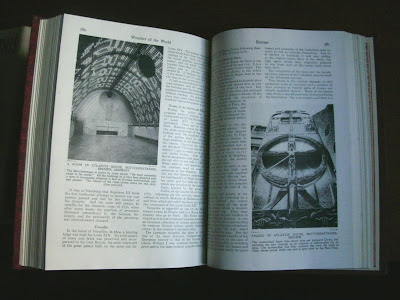 Email ThisBlogThis!Share to TwitterShare to FacebookShare to Pinterest
Labels: biblio