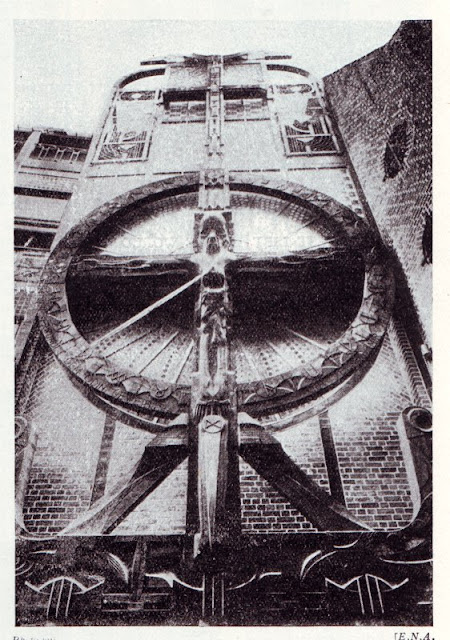 This is one of the images that dates the previously-mentioned Wonders of the World: the Lebensbaum (Tree of Life) wooden sculptural facade to Bernhard Hoetger's 1931 Haus Atlantis in Böttcherstraße, Bremen.

As Wonders of the World puts it,

The outstretched figure here shown does not represent Christ, but embodies the idea common to all religions of self-sacrifice for an ideal. The surrounding Sun Disc connects this with the myth of Odin, whose annual death was said to give birth to the New Year.

This is more than a little of an underexplanation. As can be seen in the detailed images at the House Atlantis page on the Böttcherstraße website, the figure is a kind of Odin-Jesus symbol, surrounded by a wheel with runes and a quotation of the episode in the Poetic Edda where Odin suffers self-sacrifice to gain the power of the runes ...

I know that I hung on a windy tree, nine nights long, wounded with a spear, dedicated to Odin, myself to myself.

... while the three-pronged structure at the base is recognisably an Odinist "Toten" rune (aka death rune). There are more images at Jeff Diehl's Haus Atlantis Odin page, and this particularly clear one in Lionel Gossman's 2009 biography of Marie Adelheid, Brownshirt Princess: A Study of the "Nazi Conscience" (page 10):

The symbolism of the piece draws on a manufactured tradition of Nordic-Atlantean myth favoured by top-ranking members of the Nazi party. Furthermore, the whole Böttcherstraße architectural project, bankrolled by the decaffeinated coffee magnate Ludwig Roselius and designed by Hoetger, was dedicated to the prime mover of these myths at the time, the lay historian-scholar Herman Wirth (see Nationalist Uses of the Atlantis Myth in a Nordic Framework, Vanessa Ward, 2008). Hoetger, however, fell out of favour when his expressionist sculpture was denounced as "degenerate art"; he settled in Switzerland, where he died in 1949.

The Lebensbaum sculpture was largely destroyed by fire following Allied bombing in 1944. Unlike the rest of the street, it wasn't restored (unsurprising, perhaps, given its history and symbolism) but the frontage of Haus Atlantis was eventually given a redesigned restoration in 1965 with a circular brick-pattern mosaic by Ewald Mataré, another German artist whose work had been considered degenerate.