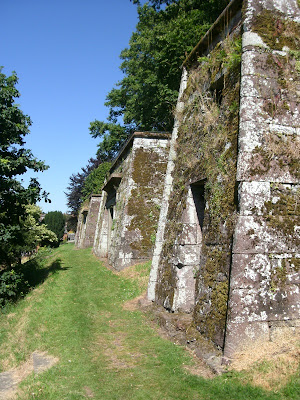 On Monday, Felix Grant came down to Exeter for the afternoon (having known each other via science/computing circles for around 20 years, we get together for a chat from time to time). While we were walking off a light lunch, I showed him round the very photogenic Lower Cemetery, built on a valley slope below the city wall just a few minutes' walk west of the city centre. Studded with tombs, it's topped by a Karnak-style catacomb, built as the upmarket part of the cemetery. It was a financial failure, being overpriced: only 16 interments were ever made, and now remains largely as a picturesque folly. More details at the British Listed Buildings entry and Exeter Memories: Catacombs and Lower Cemetery.

It''s normally locked, but this afternoon Clare and I took one of the twice-weekly free Red Coat guided tours: Churches, Cemeteries & The Catacomb. A catacomb may sound dismal, but on a hot bright afternoon it felt strangely friendly; its vaulting is spacious and high, with soft sunlight filtering in. Clare described it as "like a little cathedral".

The Catacomb consists of a single central vault running parallel to the city wall, with side alcoves and few sections with rectangular niches for burials. The tour is done with the help of a strong torch, but in fact it's light enough that you rapidly adapt enough to see. Unfortunately my camera was less up to the conditions than my eyes, but I did my best.