I think at times I filter my whole life through science fiction allusions. I went out this evening, and on the way home saw this scary handle of a potato ricer (left) in our local hardware shop window, which strongly resembled the alien's tongue from Alien (right) ...

... and then in the pub I stepped on a cheap plastic ring, of which the remnant when I picked it up had a strong resemblance to the palm flower in William F Nolan and and George Clayton Johnson's Logan's Run, a dystopian SF novel (on which a rather crap film adaptation was based) in which the culture limits lifespan to 21 years. 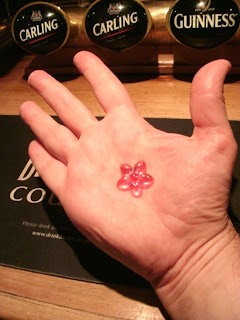 All individuals have a flower implant in the palm. Red flower is when you're in the last third of your life, and it turns black on your last day, during which you're expected to report for euthanasia (if you don't, you get hunted down). In the film, the thing was a round faceted 'Lifeclock' crystal, but in the book it was described as a flower. There were various other differences between book and film: see The Highly Unofficial Logan's Run FAQ.