The designs were submissions to a competition run by The Tower Company Limited of Westminster, which was set up to fund and build a London equivalent of the Eiffel Tower on the high ground of Wembley Park.


Eighty-six designs in all have been sent in for competition. Of these, however, only sixty-eight fall within the scope of the specification. All of the designs, are now on exhibition to the public free of charge in the Hall of the Drapers’ Company, Throgmorton Street, London, E.C.

It would be remature to pronounce any opinion upon the merits of the designs, as the jurors have not yet delivered their award. The designs exhibit considerable range of style. The Eiffel Tower design, more or less modified, appears in several of them. Some are apparently suggested by the conventional pictures of the Tower of Babel, others are ecclesiastical towers whose proportions have simply been expanded, others are magnified screws, while some are glass fumaces of monstrous size. The lure of £500 has brought into the net not a few curiosities. There is the Chinese lantern design, the design on half a. sheet of note paper, the factory chimney design, the gigantic mast design, the candelabrum design. More than one of the designers aim at a tower of 2,000ft. in height. One of these proposes that the base of his tower shall occupy sixty-four acres, or about twenty times the area of the Albert Hall.
- Industries and Iron, 2nd May 1890

The seriously weird ones include, for instance, Design No. 6, S Fisher's "monument of hieroglyphics" served by a spiral railway; J Horton's Design No. 17, also spiral; the positively scary Design No. 19, JW Coucham's skinny single-vertical "Century Tower"; Design No. 29, Albert Brunel's scaled-up granite replica of the Tower of Pisa; and Design No. 38 by AF Hills (Arnold Hills of the London Vegetarian Society) which was to feature an "aerial colony" and to be capped by a one-twelfth scale replica of the Great Pyramid. Quite a few are modern in concept and, like the Shard, wouldn't just be a skeleton but would also incorporate residential and office space.

The first prize of 500 Guineas was awarded to Design No. 37 by Messrs. A. D. Stewart, J. M. McLaren and W. Dunn, of London: a 1200-foot octagonal tower "of Oriental character" which would feature a principal stage at 200 feet, containing an octagonal central hall and a 90-bedroom hotel. Work on this "Watkin Tower" - so nicknamed after its instigator, the railway magnate Sir Edward Watkin - started in 1893, not using the winning design, but that of a simpler copy of the Eiffel Tower.

It was a project that revolved tightly around the financial interests of its creator. As described in The Infernal Tower at London Particulars, the whole thing was centrally a scheme to drive money toward the Metropolitan Railway Company, of which Watkin was chairman. Its line ran next to the Wembley site, and it conveniently opened a new station serving the site in 1893. Watkin's own company The Tower Company Limited (aka the Wembley Park Tower Company) was the ground landlord of Wembley Park, and it  received rent from another company of his, the Metropolitan Tower Construction Company Limited, set up to organise the building (and which, at his direction, received payments from the Metropolitan Railway Company).

The whole scheme went belly-up with the liquidation of the Metropolitan Tower Construction Company Limited in 1899, and the completed base - the "London Stump" - was demolished over 1904-1907. There's a good account of the whole saga at the Giles Milton blog: A tale of two towers: the fabulous folly of Edward Watkin. The site is now occupied by Wembley Stadium.

John Ptak also noted a Topsham connection: Design No. 2 is by a "D Vernon, Topsham, Devon". I haven't been able to find who D Vernon was, or what qualification he/she had for designing a tower. 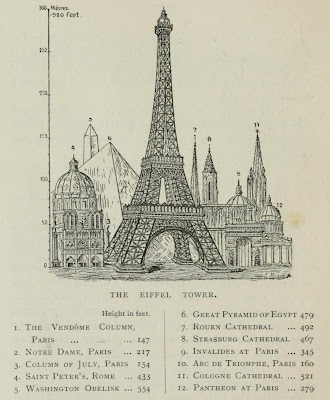 Incidentally, I like the picture on page 4 of the catalogue, comparing different buildings. It's reminiscent of the architectural capriccios I mentioned a while back: see Architectural fantasies.