At the previously mentioned Veitch Exhibit at The Topsham Bookshop, I've just been looking at a 1912 catalogue for the International Horticultural Exhibition (the precursor to Chelse Flower Show). The adverts have some lovely images, such as this one for the One & All horticultural suppliers ... 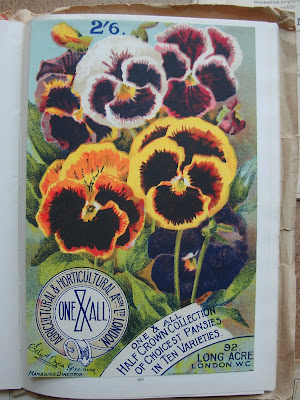 ... as well as a few that give glimpses into weird scientific/social history, such as this seemingly too-good-to-be-true advert for the "Liverpool" Virus rodent killer. Investigations reveals a decades-long wrong turning in the field of rodent pest control. 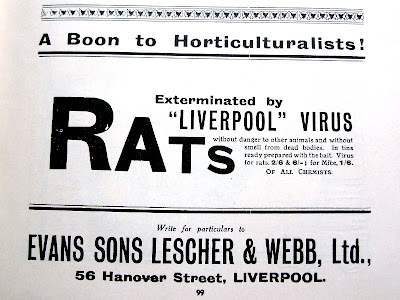 A Boon to Horticulturalists!
RATS Exterminated by
"LIVERPOOL" VIRUS
without danger to other animals and without smell from dead bodies. In tins ready prepared with bait. Virus for rats 2/6 & 6/-; for Mice, 1/6.
OF ALL CHEMISTS
Write for particulars to
EVANS SONS LESCHER & WEBB, Ltd.,
56 Hanover Street, LIVERPOOL 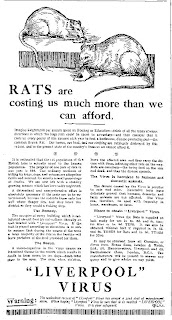 It was being advertised in The Times from 1909 to the start of World War 2 (see a 1921 display ad, left) and the makers made some strong claims: that it was completely specific to rats and mice, and that stricken rodents would be affected with "wanderlust" and leave the area (hence the "without smell from dead bodies" part). It was also declared to be "made in England, by English scientists".

It wasn't actually a virus in the modern sense, but an unspecified bacterial culture, and in the late 19th and early 20th century, there were various similar products that used bacterial pathogens, such as "Ready Rat Relief" and "Ratin", and "virus Pasteur" and "virus Danysz" on the Continent.

The safety of these first came under scrutiny in 1908 with an account of an outbreak of a food poisoning: Account of an epidemic of enteritis caused by the "Liverpool virus" rat poison (Lionel Handson and Herbert Williams, British Medical Journal. 1908 November 21; 2(2499): 1547–1550). Twelve people came down with severe enteritis in a house where the product had been used, and stool cultures showed they'd been infected with whatever bacterium was in the "Liverpool virus". A later account - An outbreak of food poisoning probably due to "Rat Virus" (Robb Spalding Spray, JAMA, 1926;86(2):109-111) told of a larger incident, with 140 students affected who had eaten at a single meal session in a West Virginia University student hall.

It was only in the 1940s that any kind of external view of these pathogens became available, when reports by the University of Oxford Bureau of Animal Population and PH Leslie in the Journal of Hygiene showed that they contained various strains of enteritis-causing Salmonella. The food poisoning outbreaks were, in hindsight, unsurprising; and furthermore, rats proved to be capable of being carriers of the disease. The use of bacterial rodenticides carried on until the late 1950s; not long after, a 1967 FAO/WHO report concluded:


In connexion with salmonellosis in rodents it should be re-emphasized that salrnonellas should under no circumstances be used as rodenticides. Rodents rapidly develop resistance to Salmonella serotypes; thus, this method has little practical value. Moreover, it has been shown in different countries that such practices are a public health hazard because the serotypes used are dangerous to man.
- Prospects for biological control of rodent populations, Kazimierz Wodzicki, Bull.World Health Organ., v.48(4); 1973, PMC2481104