We were on the train at Taunton station on Sunday, when I noticed an unusual concentration of people aiming cameras, and furthermore, a member of station staff uncoiling a large water hose. I deduced that a steam train must be just pulling into the station. It shortly revealed itself to be the 1937-built and beautifully streamlined LNER Class A4 4464 Bittern. I'm not especially a steam locomotive enthusiast, but this is rather splendid, one of the few renovated to a state certified for mainline use.

In the picture above, you can see part of a strange-looking phenomenon: as we travelled through Somerset and into Wiltshire, there was a peculiar and ominous dark line in the clouds, at least 20 miles long, running parallel to our route. 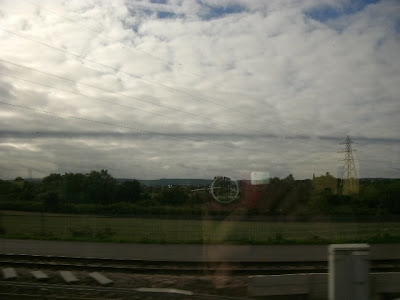 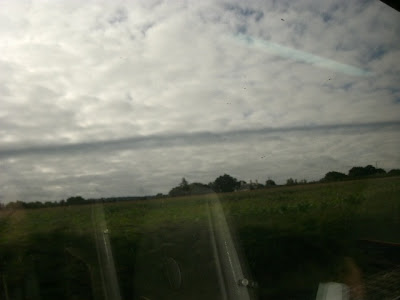 It was only when the cloud cover broke that the explanation was revealed: the general cloud cover must have been a flat relatively thin layer, and the line was the shadow cast on it from above by a prominent jet vapour trail higher in the atmosphere. In the picture below you can see it and its shadow (lower right). 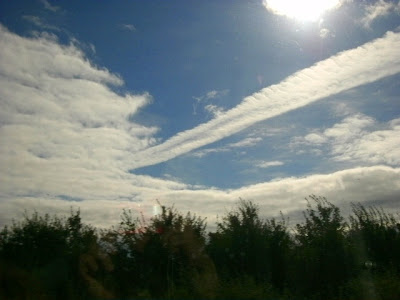 On the subject of train journeys, I've just started reading the Finnish writer and artist Tove Jansson's short story collection Art in Nature, Thomas Teal's translation published by Sort of Books in 2012. Jansson is of course best known as the author of the Moomin series of children's books, but she was also a distinguished artist and the author of a number of novels and short stories.

The Independent review by Christian House (here) describes the anthology as a "dreamlike trip through the magic of life" and as "a sublime little collection of stories that is full of boats and beach houses, painting and plays", which makes them sound rather twee. Far from it; despite bright and minimalist settings, many of the stories are very dark, especially the first I read, The Locomotive. It concerns a mechanical draughtsman who works for a railway company, and whose private hobby is drawing locomotives. As becomes rapidly clear from the focus of his obsession and his detachment from people, the unnamed narrator is evidently somewhere on the autism spectrum, and views what little human interaction he has entirely within twin metaphors of artwork revision and train arrivals/departures.

His routine is broken when he perceives what he believes to be a kindred spirit in a woman he meets at a station who expresses an interest in train travel. He hires her as a housekeeper, and over time, she falls  in love with him (this is obvious to the reader, but the narrator only feels disgust at her attempts to get close to him). So, with the meticulousness and methods of his draughtsmanship - drawing and erasing scenarios - he begins to plot her murder.

Although The Locomotive could be classed as psychological horror, the stories in Art in Nature are highly variable in genre, ranging through fantasy, explorations of art and its creators, and wry comedies of manners and relationships. It's very polished collection from an author whose other works have been largely eclipsed by the Moomins.