The week before last I was in town on various errands, and decided to visit Exeter Cathedral. I've been before, but not fully explored it; and further, I decided on impulse to go on the roof tour. First: a quick preamble at ground level. Click any image to enlarge.


I was rather touched by this memorial. Among the many conventional and pious inscriptions on the tombs of ecclesiastical fatcats, it was refreshing to see this honest commemoration of a young mother who died saving her child. 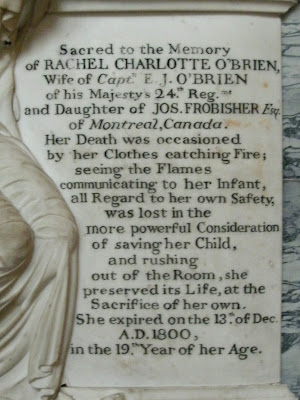 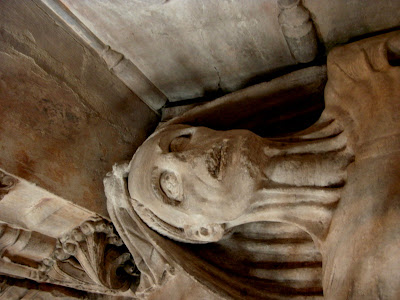 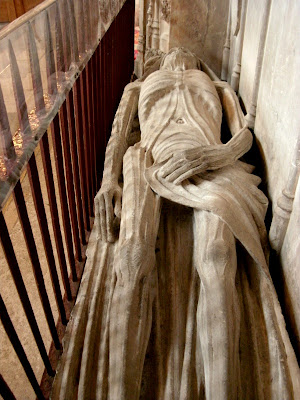 This scary cadaver tomb seemed a good excuse to repost a link to Henry Glassford Bell's 1832 anthology My Old Portfolio; or Tales and Sketches, which contains the highly pertinent story Dicky Cross, the idiot of Exeter, whose setting is Exeter Cathedral and its environs, during the reign of George III. Starting with the hoary old framing device of its being allegedly based on fact ...


"Should this volume be fortunate enough to find any readers in Exeter, they will doubtless perceive that the above story is by no means a mere fiction"

... it concerns a virtuous young woman who takes a short-cut through the cathedral at dusk, and finds she is locked in with a murderous idiot who lurks among the tombs. All ends happily.

I haven't been able to find the tomb described in the story:


There was one tomb nearly directly opposite to where Mary sat, on the other side of the chapel, well known to all the inhabitants of Exeter, by the remarkable recumbent figure which was carved upon it, and which no one ever passed without pausing to look at. The figure was that of a skeleton, very ingeniously executed, and grinning as if in silent mockery of all the vanities of life. A helmet with the vizor up, partially concealed the skull, and in the long bony hand was a broken lance. It was a vivid and painful representation of what the once powerful tenant of the sepulchre beneath then was, and of what all humanity must one day be.

Did I miss it, or is it fictional?