Yesterday Clare and I went to Beer Quarry Caves, the now-disused underground quarry used to mine Beer Stone, a grey fine-grained variety of chalk used historical for ornamental carving in a number of cathedrals and other buildings.

Getting there by public transport is mildly complicated. It was  bus to Exeter and another to Sidmouth ...


... then the 899, a small local bus that only runs four times a day, that goes through narrow lanes through the village of Branscombe and has a stop outside the Beer Quarry Caves site. 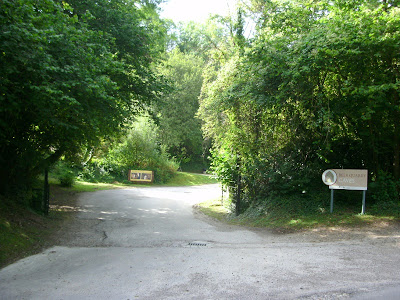 The location was quite a surprise. I'd imagined a quarry, but it's all overgrown with woodland, and your first impression of the amazing quiet (especially after a quarter of an hour of the bus rattling through the lanes). There was a small cafe that doubles as ticket office, and we sat outside waiting for the half-hourly tour watching a dozen chaffinches eating from a bird feeder, with a pheasant mooching around nearby.

You get equipped with a hard hat, and are advised to wear a fleece or something else warm (it's around 9°C-10°C in the caves); if you don't have one, they lend you a poncho. From the cafe, you walk down into a cutting to the entrance. 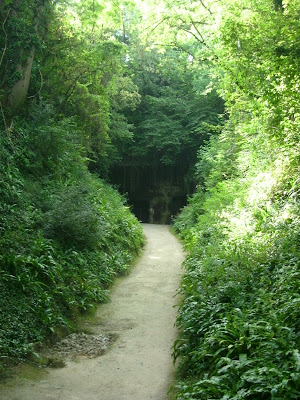 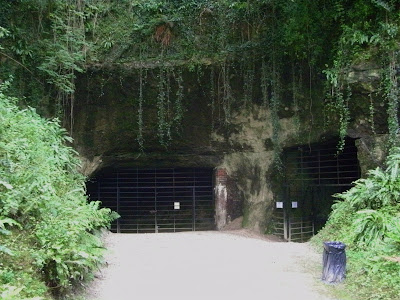 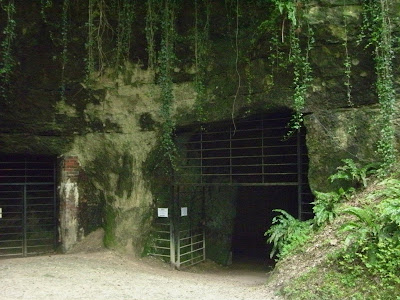 The first chamber, dating from Roman times, has a museum of photographs, tools and other artifacts of the quarrying. From there, there's an interesting guided tour that lasts about an hour. It's not at all claustrophobic; the chambers are very spacious, just rather chilly and damp. I won't bore with the historical and technical details (they're readily findable in the Wikipedia article Beer Quarry Caves and the official site beerquarrycaves.co.uk); we went just because of it being an interesting and unsual place. 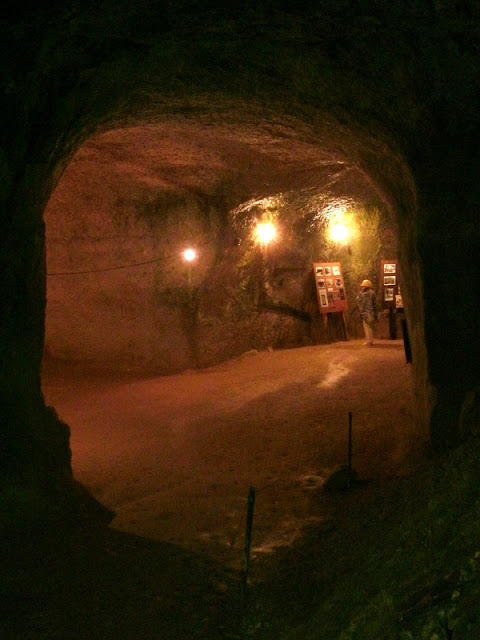 They don't mind photography, as long as you don't take a tripod. With a pocket camera, it's just about possible to get shots - you should correct, as I forgot to, for the reddish cast of the 110V incandescent lighting - if you use a spot of ingenuity in finding places to brace the camera for long exposures. 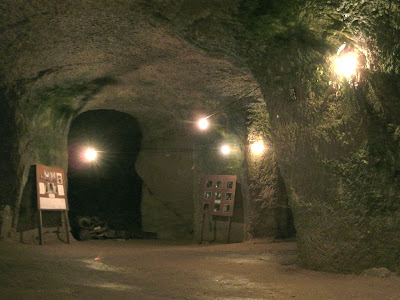 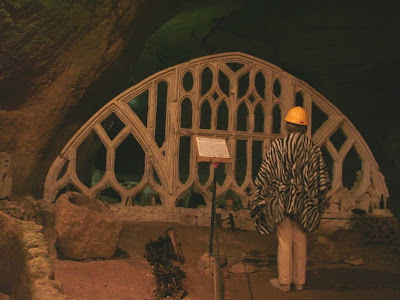 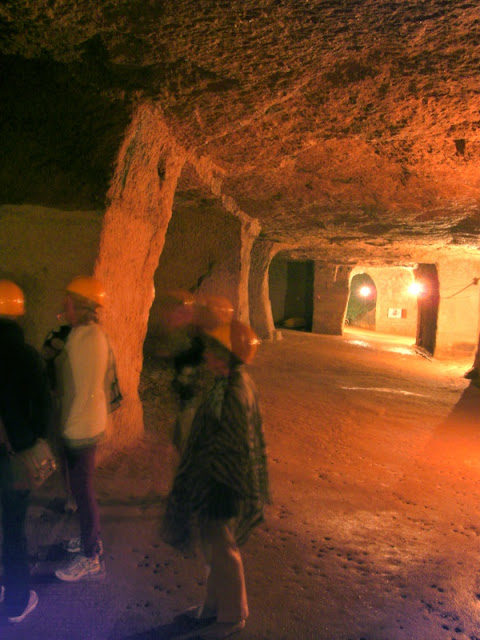 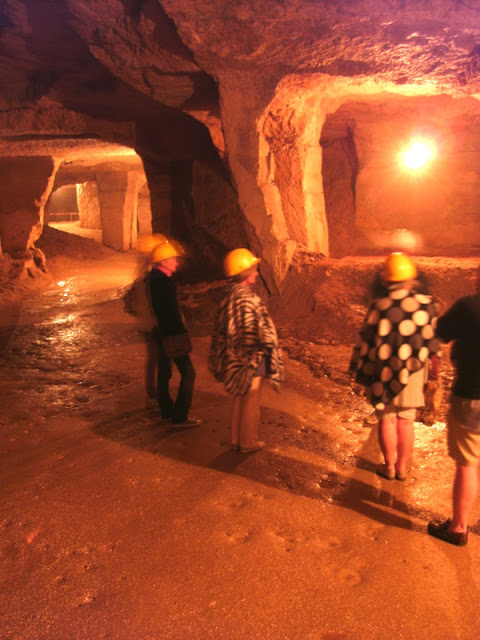 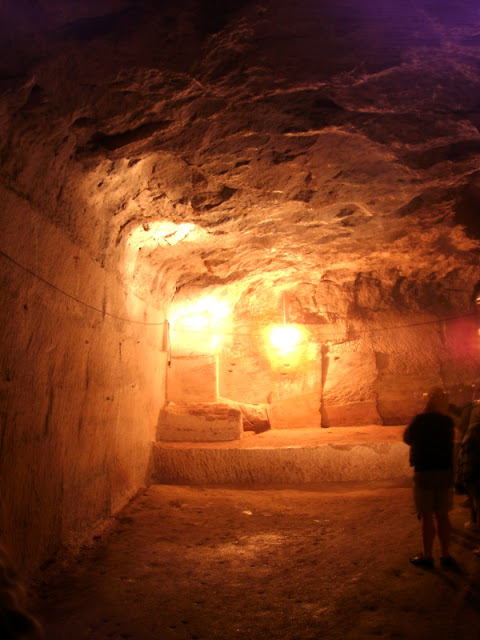 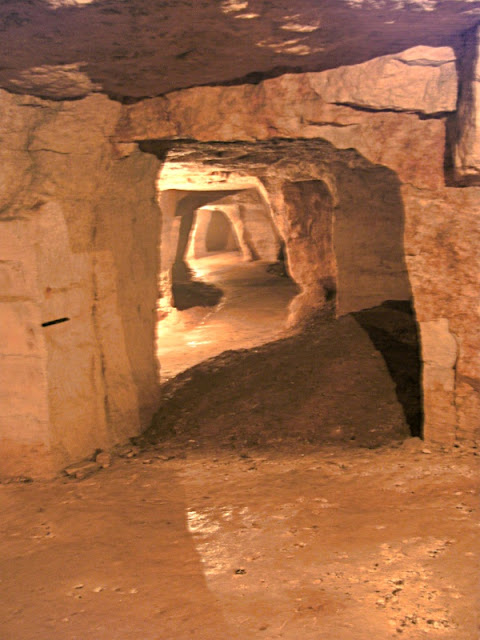 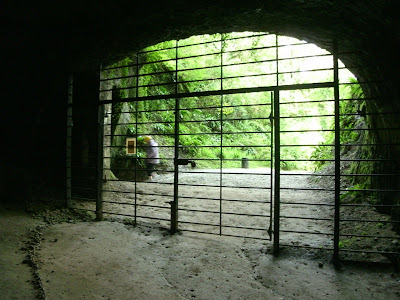 If you're exploring the area on foot, there's a path from the reserve car park that heads south-west through the woods, then across fields, toward Branscombe. Once you reach the valley, you can turn seaward and walk down to Branscombe Mouth, where there's a larger cafe restaurant, the Sea Shanty, that sells varied cooked food.

We've been here before from the other direction - see Hooken Undercliff and beyond - but it's a great walk in either direction to take the undercliff path that starts at the holiday park on the cliffs above Branscombe Mouth.

This goes through underbrush below cliffs strongly resembling those of Gore Cliff in the Isle of Wight (see The road more travelled ...); the geology is pretty well the same. 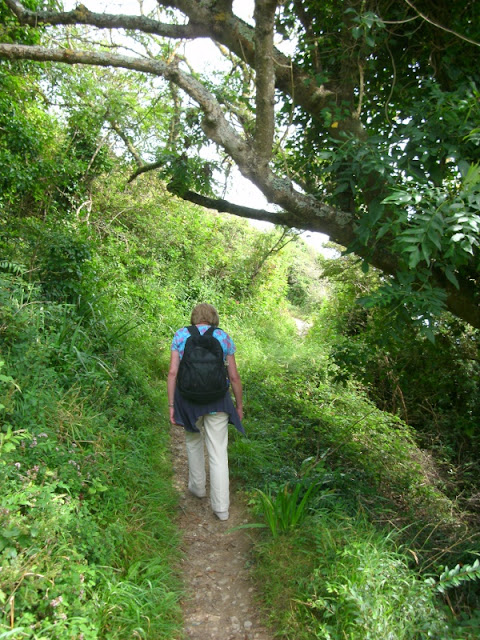 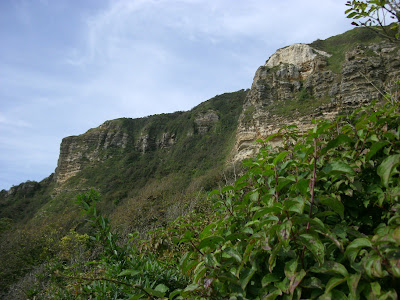 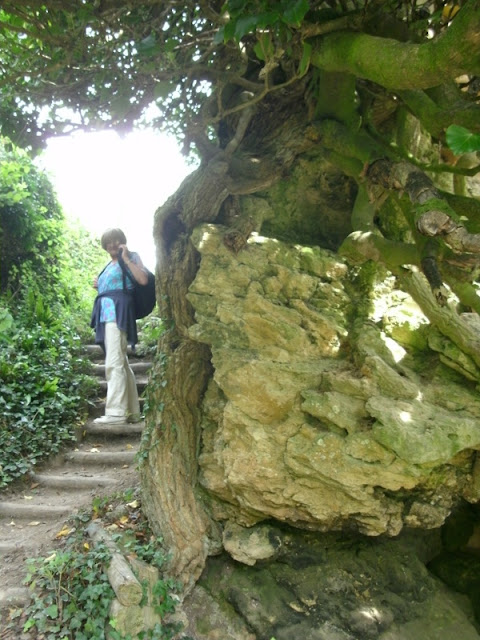 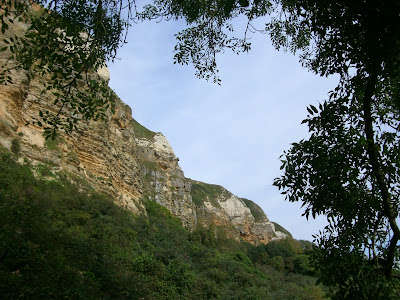 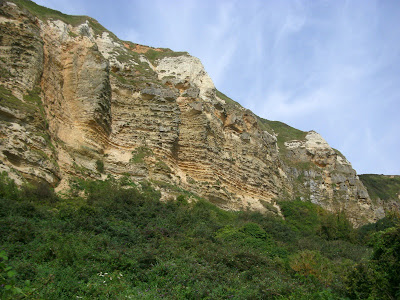