Bonchurch, though pretty, is almost entirely a 19th century construct, whose layout hasn't changed much since the Isle of Wight populariser George Brannon commented on it:


Formerly this was one of the most romantic scenes in the island, but has lately been converted into a fashionable village. Amidst a profusion of new houses, more or less tasty in their style — a villa called East Dene, and the neighbouring old Church, are all that will here particularly call the stranger from the carriage road.

Bonchurch abounds in delightful walks : if stopping at Ventnor, a good way of seeing the place is to take the road by the Pond — look at the old Church — ascend the hill, passing the new Church — turn in front of Hotel (just beyond which is a rugged path to the top of cliff) — and reach the lower road by a descent of 99 steps. Or proceed from Ventnor by path on edge of cliffs to the old Church, and then as above.

In the year 1834, this beautiful spot was advertised to be sold off in small lots for building 18 or 20 villas ! — a circumstance much regretted by the admirers of the peculiar scenery of the Undercliff, which was exhibited here in its utmost perfection. Nearly the whole of the land is now disposed of ; some of the houses were built for the purpose of letting lodgings ; one has been opened as a first-rate Hotel ; but the greater number are private residences, — and certainly it must prove a most enviable retreat for families and invalids during the winter months. It is impossible for any spot to be better adapted for a number of houses being built in a comparatively small compass : for the whole of the ground is so romantically tossed about by the sportive hand of Nature, presenting here a lofty ridge of rocks, there a woody dell adorned with a purling stream or a limpid pool, that most of the houses are completely hid from each other's view.

From the bad taste which too generally prevails — we mean the vanity of glare, — the affectation of elegance — so frequently carried out at the expense of all propriety, we were not without apprehension, that many of the gentry at Bonchurch would also neglect the essential rule, that the peculiar character of every scene demands an APPROPRIATE STYLE in building and decoration ; for it avails little to have ivy mantled roeks and mossy cliffs, the sunny knoll and the shaded glen, with their groves and streams, — if the Genius of the place be not consulted, and HARMONY made the rule of every innovation and improvement. In a word, it is too often in building as in dress, that many persons resort to show and refinement as the surest means of attracting the world's admiration for their superior taste and rank ! But in justice to the Gentlemen who have located in this fairy-land, we must acknowledge that they for the most part avoided (as far as was possible) disturbing the natural beauties of the place, and have studied to make their happy retreats...
- George Brannon, Brannon's Picture of the Isle of Wight, 1855 (Internet Archive ID brannonspictureo00bran)

Brannon expressed stronger outrage in his earlier Vectis Scenery, published while the development was ongoing:


Having noticed above that a large portion of Bonchurch is under the hand of Innovation, — or as perhaps some of our friends would say, of Improvement, — the reader will not deem it out of place, if we here put upon record what the character of the scene was previous to its being subjected to the metamorphosis which is in rapid progress. In the year 1837, it was first advertised to be divided and sold off, for the purpose of erecting eighteen or twenty houses! in a style suitable for the retreat of opulence and pomp. From that moment it was doomed to have its venerable features defaced, and every native charm of wildness and tranquillity for ever banished.

The whole of this spot (previous to the year 1837,) was distinguished by the boldest variety of surface, and a range of cliffs, the most interesting for their craggedness and tone of coloring that could possibly be imagined. No part of Undercliff was so much admired by all tastes, — it was considered Fairy-land itself. Many were the huge rocks seen rearing themselves in lofty pyramids of the most picturesque forms and grotesque appearance; or spread into grassy terraces of considerable extent, enriched by the ivy's vivid green, and the light waving foliage of self-sown ash, firm -rooted in the deeper clefts: groves of magnificent elms intermingled with knots of the choicest exotic shrubs, alike flourishing in the open air: here a genteel cottage -residence ; there the lowly habitation of a fisherman or peasant; almost concealed in luxuriant flowers and ivy mantling to their chimney-tops. Every dwelling was thatched with straw (so conducive to the harmony of effect), and seated among the towering rocks and ridges in a way to be shut out from each others' view. There was nothing in the whole scene obtrusive or alien in appearance ; for even the abodes of the rich were quite in character — homely and unpretending, comfortable rather than elegant in their construction. In short, every feature, however minute, was of a harmonizing complexion : each contributed its share to the production of a splendid whole, — a Picture of the most delightful keeping in light and shade, in coloring and composition, which the island could produce.
- George Brannon, page 38, Vectis Scenery, 1840 (Internet Archive ID vectisscenerybei00bran)

Given its general residential nature, then, very little of Bonchurch's intriguing terrain is accessible to the visitor. The main street - Bonchurch Village Road - lies in a linear valley (historically called the Vale of Bonchurch) between the descending hillside and a long ridge of slipped rock, with interesting features. At the eastern end opposite the church, the ridge is topped by a summit called Flagstaff Rock, still visible among the trees: 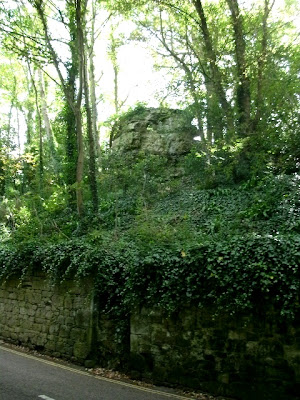 Here's a print of the same rock from Gwilliam's 1844 Rambles in the Isle of Wight (it's called by its alternative name Undermount Rock): 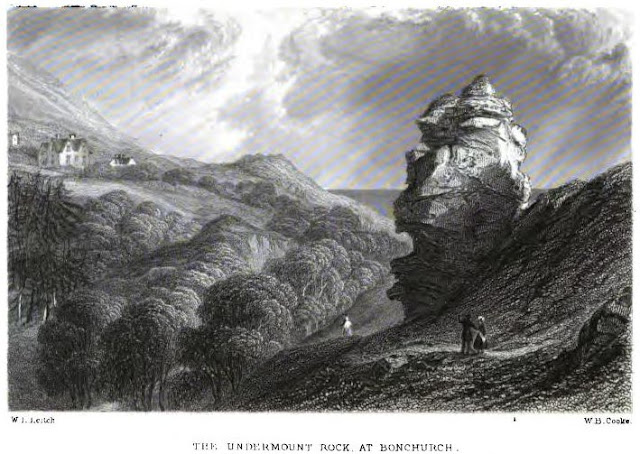 This, however, is on private ground, as is the discreet driveway and tunnel through the ridge to the house on the other side, Undermount. 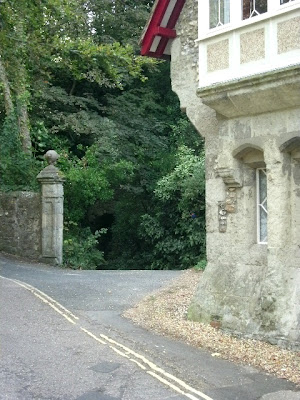 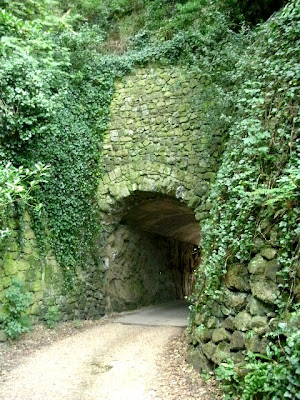 Bonchurch Village Road is adjoined by a long duckpond - originally on private land, but donated to Bonchurch by its then owner, the previously mentioned H De Vere Stacpoole. Its environs, however, are not visitable on conservation grounds. 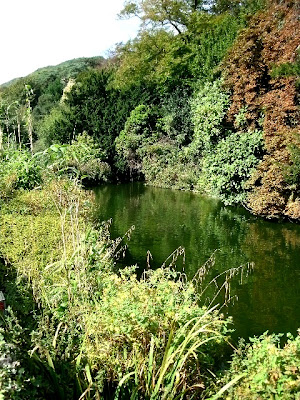 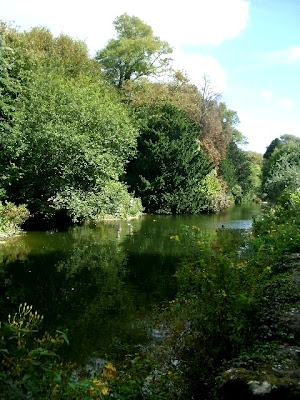 Probably the best chance to see the hidden Bonchurch is to go on one of the annual The Beautiful Gardens of Bonchurch open weekends, which take place in July each year.

You can read more about mid-1800s Bonchurch in WB Cooke's 1849 Bonchurch, Shanklin & the Undercliff (Internet Archive ID bonchurchshankli00cook). It mentions some of the origins of the modern landscape; for instance, after enthusing about the Pond, it mentions its embellished nature:


Passing onwards, the Vale of Bonchurch begins. Here, on the way-side, to the left, appears a bold, rocky scene, from whose dark chasm beneath issues a copious stream of the most pellucid water, filling a small pond, or natural basin containing gold and silver fish, and so transparent as to show the aquatic plants at its bottom, in the most lovely green, while its glassy surface is here and there adorned by the water-lily, its white bloom resting on its expanded leaf. From the upper part of the rock descend a few silvery threads of crystal water, splashing and sparkling in the morning's sun, exhibiting at times, in front of the dark chasm, the prismatic colours of the rainbow.

Proceeding along the vale, we hear the gushing of the Waterfall, — a recently-formed cascade, admirably contrived by the spirited proprietor of Pulpit Rock,* who seems to spare neither expense nor trouble in improving and adorning this little earthly paradise.

* This handsome addition to the beauties of Bonchurch, was converted from a rude osier-bed into the elegant scene it now presents. It was completed early in the spring of 1849.