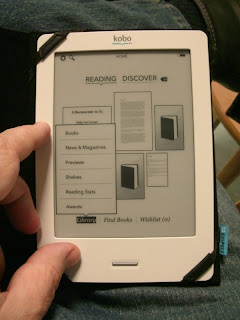 I've strongly resisted getting an e-book reader, but with the prospect of some boring days ahead, out of office, with books I want to read for research, I finally got a Kobo eReader Touch.

The choice was partly down to review recommendation (it was Wired Magazine's 2012 Editor's Pick for Best eReader); partly specifications (anecdotally, I'd seen accounts that it handled PDFs unproblematically, as well as EPUB); and partly cheapskate (it's less expensive than the equivalent Kindle).

This is not going to be any kind of systematic review: what you see is what you get. It has a ambient light display (not backlit) with good black on light-grey contrast, and straightforward touch controls. It charges and connects through your computer USB port, and you synch it with the Kobo site to download books. 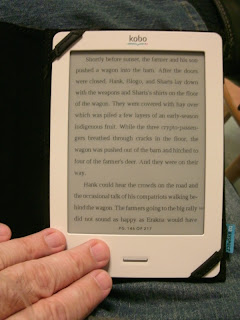 Kobo's library doesn't seem wildly large, but I chiefly wanted it for out-of-office reading of PDFs from the Internet Archive (mainly connected with the Maxwell Gray project and quite a few other Victorian novels that are on my to-read list). I loaded a few, but when it came to it on the day - the prospect of five hours having chemotherapy - some less demanding reading appealed more, and I found some obscure Keith Laumer and Philip José Farmer works online.

One slight horror story. I got a Kobo from Argos a fortnight ago, and it was bricked: nothing would turn it on or charge it. Kobo's e-mail support were very thorough, but ultimately it came down to their telling me to try stuff that required it to be charged, and my repeatedly telling them it wouldn't charge. When it got to some request to send in a huge list of specifications, including photos of the device, I cut to the chase and I took it back to Argos, and they replaced it with one that worked straight out of the box. I've no idea how common a problem this might be. Anyhow, I've a working device now, and am very pleased with it.


Addendum: I should specify that PDFs out of the Internet Archive are a little touchy on e-readers. Because those scanned by Google are basically just big graphics images, you can't independently change font size as with EPUB, only do a global zoom, nor can you search inside the document. Google PDFs also have the annoying feature that, because of end matter, physical page in the PDF doesn't match the page numbering in the book. Nevertheless, they're accurate facsimiles, and better than the Internet Archive EPUB option, which tends to have a lot of OCR errors. For example, the frontispiece of The World Mender by Maxwell Gray (Mary G Tuttiett) reads in EPUB: