Bonchurch: and a singer asleep

Continuing our exploration of Bonchurch on Monday.

After descending The Chimney, we followed The Pitts to the road called Bonchurch Shute ("Shute" is a local term for steep roads off the escarpment) and by the junction is a gate to the footpath (here) into the churchyard of the parish church of St Boniface (aka Bonchurch New Church), which is itself fitted into a niche in the hillside. 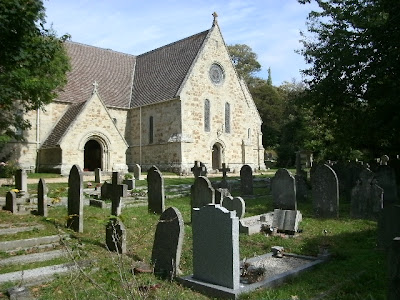 The most prominent tomb in the churchyard is this Egyptianate mausoleum - the Leeson Mausoleum - commissioned by Henry Beaumont Leeson. 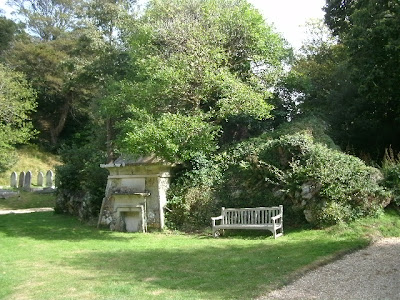 Leeson, Henry Beaumont, 1803-1872, M.D., Oxon., F.R.C.P., Lond., F.R.S., M.R.Inst. Senior Physician and Lecturer in Forensic Medicine, St. Thomas’ Hospital, London. He was here in 1855, was a J.P. and land owner in Bonchurch. He held courts in the Justice Room over the Maples Stables at the corner of Madeira Road and Trinity Road. He lived and died at the Maples but owned and developed, Pulpit Rock, Rosemount, Orchardleigh, Mountfield and other properties in Bonchurch as a speculative builder. He held a Masonic Lodge in a cave in his garden (now in Pulpit Rock) He was buried in Bonchurch Churchyard under an immense obelisk tomb near the gate.
- Early Ventnor Doctors, Alan Champion, www.iwhistory.com

The novelist Henry De Vere Stacpoole, author of The Blue Lagoon, is also buried here at Bonchurch, but I didn't find the location.


(Update, 20th April 2014: I must have been in stupid mode that day. Ray Todd e-mailed me with the location: it's right next to the Swinburne plot. Thanks! - RG)

However, I found the grave I came to see, that of the poet Algernon Charles Swinburne. It's an unremarkable ground-level slab, immediately visible from the main path to the church, in a railed plot with other members of the Swinburne family. 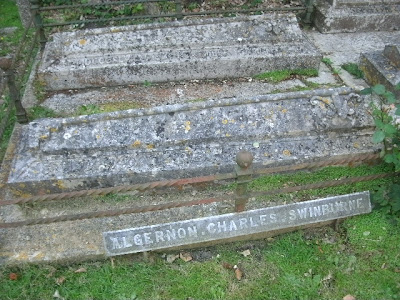 But any perceived offensiveness may well have been compounded by his rejection of Christianity, and although he was some flavour of masochist, his works didn't necessarily reflect anything more than his mindset. Oscar Wilde said that Swinburne was "a braggart in matters of vice, who had done everything he could to convince his fellow citizens of his homosexuality and bestiality without being in the slightest degree a homosexual or a bestialiser".

Nevertheless, he remains a significant Victorian poet whose works contain powerful and complex imagery that's still the subject of critical study: see Algernon Charles Swinburne at VictorianWeb.  In his lifetime and shortly after, he had sometimes surprising fans. Thomas Hardy tends to be perceived as a bit of a stiff, but he admired the lyricism of Swinburne's poetry, and was highly impressed by Swinburne's rejection of Christianity and its liberating effect of putting on the table views of sexuality and morality that went counter to Victorian sensibilities. Ralph Pite's Thomas Hardy: The Guarded Life has an extended account, evidenced by his notes, of the powerful revelatory effect Swinburne had on Hardy (see pp127-).

In this fair niche above the unslumbering sea,
That sentrys up and down all night, all day,
From cove to promontory, from ness to bay,
The Fates have fitly bidden that he should be
Pillowed eternally.

-- It was as though a garland of red roses
Had fallen about the hood of some smug nun
When irresponsibly dropped as from the sun,
In fulth of numbers freaked with musical closes,
Upon Victoria's formal middle time
His leaves of rhythm and rhyme.

O that far morning of a summer day
When, down a terraced street whose pavements lay
Glassing the sunshine into my bent eyes,
I walked and read with a quick glad surprise
New words, in classic guise, --

The passionate pages of his earlier years,
Fraught with hot sighs, sad laughters, kisses, tears;
Fresh-fluted notes, yet from a minstrel who
Blew them not naïvely, but as one who knew
Full well why thus he blew.

I still can hear the brabble and the roar
At those thy tunes, O still one, now passed through
That fitful fire of tongues then entered new!
Their power is spent like spindrift on this shore;
Thine swells yet more and more.

-- His singing-mistress verily was no other
Than she the Lesbian, she the music-mother
Of all the tribe that feel in melodies;
Who leapt, love-anguished, from the Leucadian steep
Into the rambling world-encircling deep
Which hides her where none sees.

And one can hold in thought that nightly here
His phantom may draw down to the water's brim,
And hers come up to meet it, as a dim
Lone shine upon the heaving hydrosphere,
And mariners wonder as they traverse near,
Unknowing of her and him.

One dreams him sighing to her spectral form:
'O teacher, where lies hid thy burning line;
Where are those songs, O poetess divine
Whose very arts are love incarnadine?'
And her smile back: 'Disciple true and warm,
Sufficient now are thine.'...

So here, beneath the waking constellations,
Where the waves peal their everlasting strains,
And their dull subterrene reverberations
Shake him when storms make mountains of their plains --
Him once their peer in sad improvisations,
And deft as wind to cleave their frothy manes --
I leave him, while the daylight gleam declines
Upon the capes and chines.

The reference to "she the Lesbian, she the music-mother" is to Sappho and the most likely fictional story that she threw herself off a cliff due to unrequited love (see A Sapphic Leap in Dorset?).