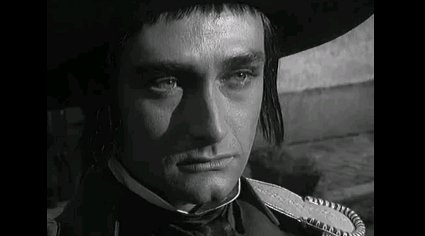 The brilliance of the Internet is again demonstrated. For years, Clare and I have been trying to find the identity of the uncredited and charismatic actor who plays the roadblock official in Ralph Thomas's excellent 1958 adaption of A Tale of Two Cities.

I asked a while back on the Internet Movie Database forum for the film, and got an answer that it was Anton Diffring, but I've never been convinced of this. Finally, however, I spotted a better answer on the forum of Britmovie.co.uk, which has a number of threads in the category of Extras, including this post.


... I was convinced the gatekeeper was Anton Diffring before realizing it was Hubert Noel.
- Dave Wright, post #739, Sighted: Ah, There You Are!

Dave is undoubtedly correct. Born Hubert Paul Luis Nion in Le Havre in 1924, Hubert Noël (aka Hubert Noel) was a French actor with a long career as a stage actor and in French cinema (see the French Wikipedia and IMDb), but who tended to appear in bit parts in rather naff examples of English language cinema.