In the previous post I mentioned a peculiarity of Elberry Cove, between Brixham and Paignton, South Devon; its freshwater springs rising from the sandy sea bed a little offshore. I've found more references, one connecting to a largely unsung 19th century naturalist.

I first ran into this detail in Torbay Coast Path, the 1972 official booklet written by AS Kingdon for the County Borough of Torbay, and there are particulars in a later diving guide:


Freshwater Springs. These are to be found 100yds off the beach at Elberry Cove and about 400yds west of Churston Point. The springs bubble up through the sandy bottom and can be spotted by the saucer-shaped indentations in the sand. The freshwater mixing with sea water produces a shimmering optical effect.
- Dive South Devon: a diver guide, Kendall McDonald, Derek Cockbill. 1990 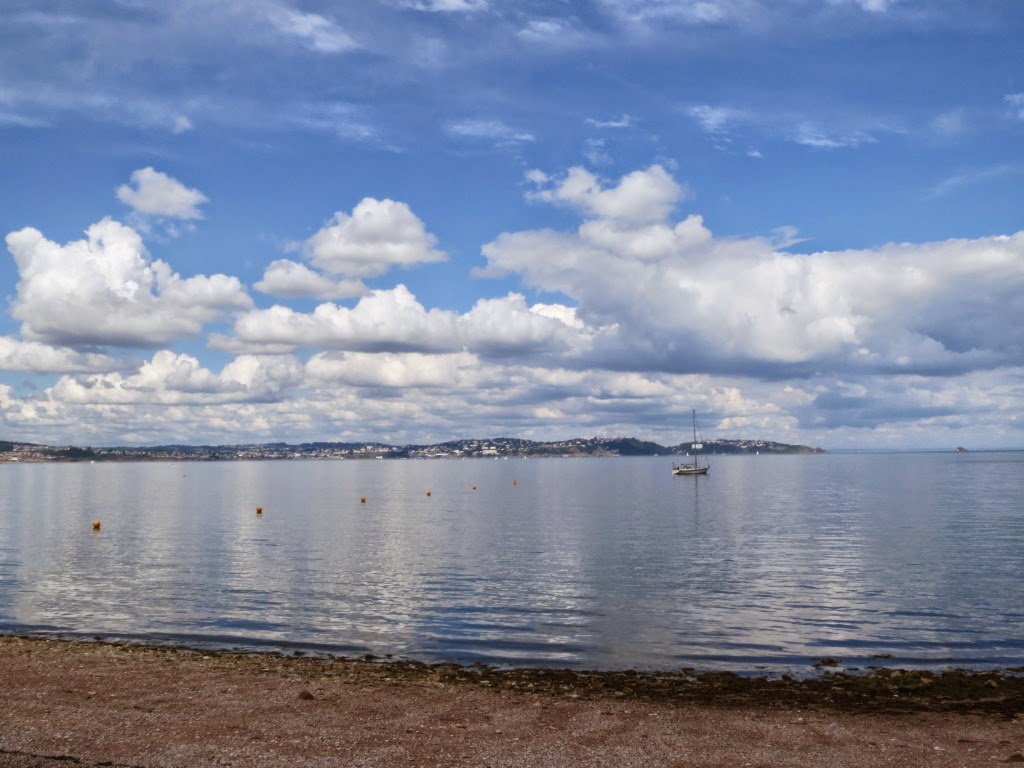 There is, however, a far more detailed account in Octavian Blewitt's 1832 The Panorama of Torquay:


Beyond Goodrington are Broad Sands, beyond which the land is broken into a few small coves, the first of which is Elberry. It will extend our walk too much to visit it by land, and the principal object of attraction can be examined only in a boat. It. must therefore be made a water-excursion, although we have introduced it in this place:—Elberry Cove is a small inlet lying open to the east; on the north it is protected by a ledge called from its appearance the "Honeycomb Rocks," and in the south angle is the Bathing-House of J. B. Y. Buller, Esq. of Lupton. At a short distance from the beach, the surface of the water presents a curious phenomenon. A fresh-water spring, rising of course in some part of the chain of hills above the cove, makes it exit from the sandy bottom, about eight or ten feet below the surface of the sea at low water mark. There is a report that a spring loses itself in the hills above, but we have not been able to prove its accuracy. It ascends perpendicularly with considerable force and forms a smooth circle, four or five feet in diameter, on the surface of, the sea. Two of these circles are occasionally seen, in consequence, perhaps, of the accumulation of sand ; and their size, depth, and distance from each other vary at different times, according as they are influenced by the swell or weather. They are of course best seen at low tide and when the sea is smooth. In April of the present year, we made some experiments in conjunction with Mrs. Griffiths,‡ in order to ascertain the character of the water ejected by this spring. The result was satisfactory, and proved that it was a body of fresh water pouring out of an aperture of large size, and with such strength that the

‡ We beg also to express our acknowledgments for the obliging assistance of Miss Amelia Griffiths on this occasion.

sand disturbed was forced by its power to the surface. The appearances within the circle resembled the effect of oil poured on the water, nor were they much affected by the ripple, which was playing on the waves around it. The temperature could not be accurately determined, but it did not seem to be higher than that of the sea. The volume of fresh water must be considerable as the salt taste of the sea perceptibly diminishes in the neighbourhood of the spring. This phenomenon will be visited by the natural philosopher with much pleasure, and independently of the interest excited by it, Elberry Cove has the honor of being the habitat of Rhodomenia Teedii.
- pp103-104, The Panorama of Torquay (a descriptive and historical sketch of the district comprised between the Dart and Teign), Octavian Blewitt, pub. Simkin, Torquay, 1832 (Internet Archive panoramaoftorqua00blew).

Despite it being very calm and low tide, I couldn't see anything from the shore; but then I didn't have any idea of the location until I Googled it afterward. Does any reader have any photos? 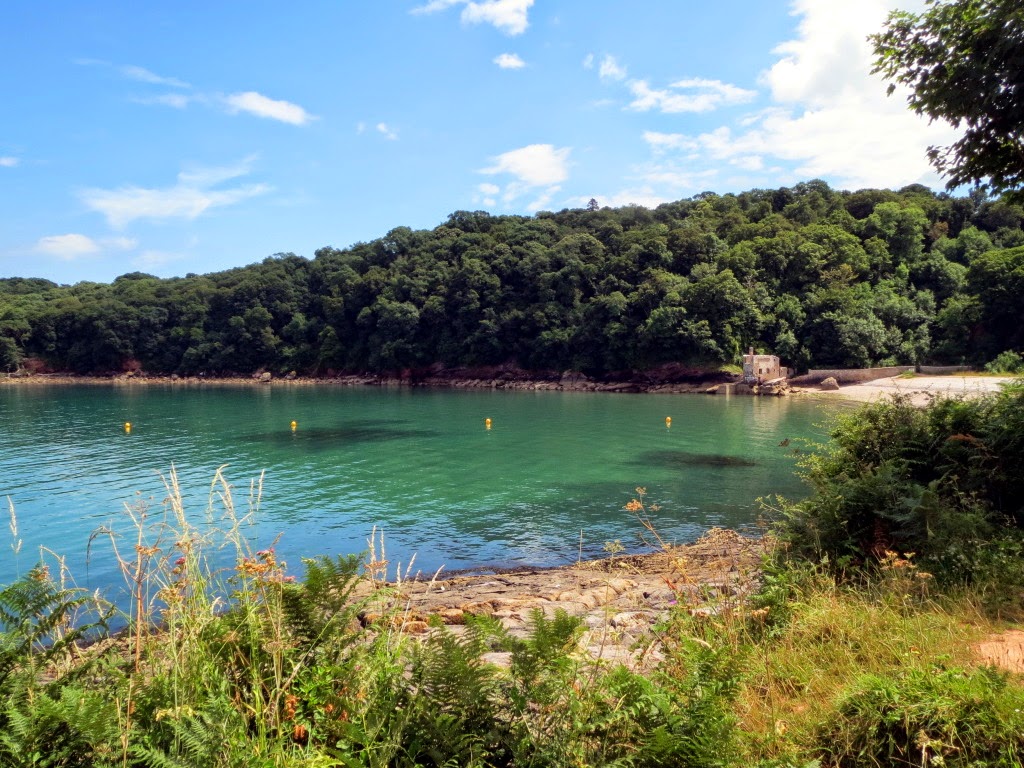 A bit on the people mentioned in the Blewitt account: JBY Buller is John Buller-Yarde-Buller (1799-1871), and the same person as the Lord Churston mentioned previously as owner of the bath house. He was raised to the peerage as Baron Churston in 1858, and not surprisingly changed the family name to just Yarde-Buller in 1860.

Mrs Griffiths is Amelia Warren Griffiths (1768–1858), a Torquay-based amateur phycologist who made many important collections of algae specimens in this area, including species from Elberry Cove. Generally referred to in the literature as "Mrs Griffiths of Torquay" (her vicar husband William Griffiths had died in 1802), she collaborated with Mary Wyatt, also of Torquay, in producing a multi-volume book of pressed and named seaweeds, Algæ Danmoniensis, published under Wyatt's name (Mrs Griffiths published nothing under her own name). There's a good article in The Phycologist, No 73 Autumn 2007 - "The Princess of Seaweeds" - giving an insight into their circumstances and collaboration. Amelia Griffiths' reputation was such that the Swedish botanist Carl Agardh named a genus of red seaweeds Griffithsia in her honour; and the botanist William Henry Harvey dedicated his 1849 A Manual of the British Marine Algæ (Internet Archive manualofbritishm00harv) to her.


TO
MRS. GRIFFITHS,
OF
TORQUAY, DEVON,
A LADY WHOSE LONG-CONTINUED RESEARCHES HAVE, MORE THAN
THOSE OF ANY OTHER OBSERVER IN BRITAIN, CONTRIBUTED TO
THE PRESENT ADVANCED STATE OF
MARINE BOTANY,
AND WHOSE NUMEROUS DISCOVERIES, COMMEMORATED IN THE GENUS
GRIFFITHSIA,
ENTITLE HER TO THE LASTING GRATITUDE OF HER
FELLOW-STUDENTS.
THIS VOLUME,
WHICH OWES MUCH OF WHATEVER VALUE IT MAY POSSESS TO HER
LIBERAL DONATIONS OF RARE SPECIMENS, AND HER ACCURATE
OBSERVATIONS UPON THEM,IS RESPECTFULLY INSCRIBED,
BY HER FAITHFUL AND OBLIGED FRIEND,
THE AUTHOR.

Some of the Algæ Danmoniensis volumes are in the RAMM Exeter museum collection. The associated web page - Amelia Warren Griffiths (1768-1858) - contains the intriguing detail that the Reverend Griffiths "died in rather mysterious circumstances". A footnote to Polwhele's History of Cornwall explains those circumstances:


That the recent death of Mr. Griffiths, was caused either by "love or madness," I will not presume to say. From the Orthodox Churchman's Magazine for August, 1802. "The Rev. William Griffiths, vicar of St. Issey, near St. Columb, on Saturday morning the 31st ult. took his horse, and said that he intended to go to Lanherne (a seat of Lord Arundell, ahout two miles from St. Columb) to see the nuns, and that if he did not return to St. Issey to dinner, he should dine at St. Columb, and retnrn home in the evening. On his not returning to St. Issey as expected, Mrs. Griffiths grew very uneasy, and sent several persons in search of him on Saturday night, but in vain; and on Sunday morning his horse was found in a field near the cliff at Mawgan, and his whip was stuck up near the cliff. As he had been seen there riding to and fro several times on Saturday afternoon, it was immediately conjectured that he had fallen over the cliff into the sea. On searching the cliff, his body was discovered under water, and was drawn up by ropes; but though the cliff was very high and rugged, he did not appear to be much bruised by the fall; his spurs were found one in each pocket of his coat, and a gold ring in his coat pocket. The coroner, (Mr. Hamlcy of Bodmin) was sent for immediately, and the jury brought in their verdict "accidental death." He is generally lamented by his parishioners, as well as by every person who knew him in the neighbourhood, and has left a widow and five children to mourn the loss of an affectionate husband and a tender father.
-  The History of Cornwall, Richard Polwhele, 1816