The men of Erith and other limericks

Literary attribution is a bit of a paradox on the Internet: misattribution spreads so easily, despite this being a time when wide digitisation of books has made it relatively simple to trace attribution. I just solved a minor attribution puzzle: the origin of a strange limerick about Erith, a district of south-east London (not a village since the late 1800s).

There are men in the village of Erith
Whom nobody seeth or heareth,
And there looms on the marge
Of the river a barge,
Which nobody roweth or steereth.

It's etymologically interesting, in recording the pronunciation of Erith as "Eerith", a detail a number of websites remind us about. But I'd bet money that most people call it "Errith" nowadays; from experience with the factoid about Topsham being "Topsum", I've concluded that when anyone goes out of their way to explain the "correct" pronunciation of a place, it's usually about bolstering a declining minority in-pronunciation.

As to the limerick: is it metaphysical? An allusion to London fog? I don't know. A quick Google finds various attributions and non-attributions. Largely it's listed as "Anonymous", and even viewed as traditional. Bob Barton, in his 2008 essay Mining the Nursery Rhyme for Treasure writes ...


"Erith" is a little-known text that has appeared from time to time in collections of nursery verse. I can't prove that it is a genuine piece of the oral tradition. It is possible that it is the work of an anonymous writer. When I visited the Erith Public Library in 2006, staff had no knowledge of the verse.
- It's Critical!: Classroom Strategies for Promoting Critical and Creative Comprehension, ed. David Booth, 2008

The trouble is, there's just no evidence of this rhyme going any further back than the beginning of the 20th century, despite Peter Levi's attribution to Tennyson in a couple of biographies; his 1993 Tennyson and 2013 Edward Lear: A Life both claim that Tennyson came up with it at a dinner party.

But the bottom line is that it was written by the poet and critic William Cosmo Monkhouse (1840-1901), and first appears in his posthumously-published limerick collection Nonsense Rhymes (illustrated GK Chesterton, pub. R Brimley Johnson, London, 1901, Internet Archive nonsense00monkuoft). 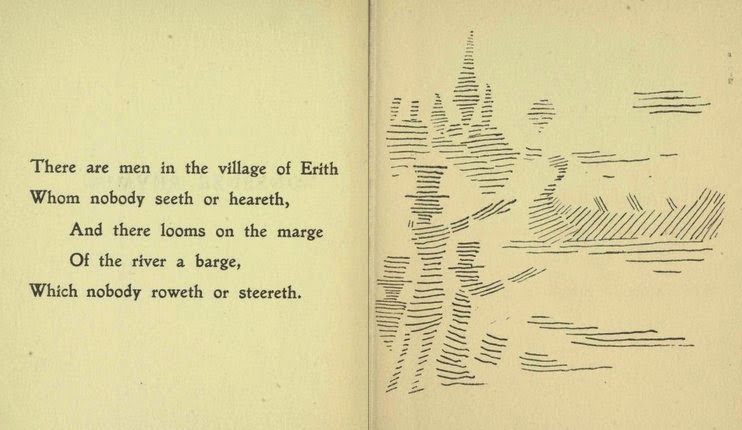 It's a strange limerick, in a strange collection. Monkhouse proves to be the author of one other classic limerick ...


There once was an old man of Lyme
Who married three wives at a time,
When asked, "Why a third?"
He replied, "One's absurd!"
And bigamy, sir, is a crime."

... but in general they're rather naff, sub-Lear offerings. By 1900, the limerick had long since evolved to the point where it was considered poor form to repeat a line ending, and yet Monkhouse includes these:

There were two little girls of Calcutta
Who used to eat white bread and butter,
Once day it was dark,
So they said, "For a lark,
Now let us have brown bread and butter."

Naff verse apart, I find this a slightly nasty little volume. Certainly grotesques are common in limericks, but coupled with GK Chesterton's drawings, it comes across as actively misogynistic. Men, by and large, are portrayed as merely eccentric in behaviour. The women tend to be predominantly physical freaks and harridans: the girl of Lahore "the same shape behind as before"; the ugly "absurd" wife of the man of Lyme; the equally ugly girl of Clovelly; the lady named Lena who marries a spotted hyena; the 25-stone lady of Holne; and the three-foot-four young lady named Harrie.

Reviewers didn't see it that way ...


The little book, called Nonsense Rhymes, by the late Mr. Cosmo Monkhouse (Brimley Johnson), would, at the first blush, be ranged with those for children; but it is really for those who retain a child’s sense of fun, with something of an adult sophistication added. Mr Monkhouse had a very pretty gift for nonsense; not nonsense with the furious rollick of Lear; but good nonsense of a sedater kind.
… The Academy and Literature, 1901

A pathetic interest attaches to this collection of nonsense verses by the late Cosmo Monkhouse. He got them together shortly before he died : they are probably the last things upon which he was engaged. They show a side of his talent readers acquainted with his serious work would hardly suspect. They are real nonsense rhymes ; inconsequential, comic, clever. With Mr. Chesterton's laughable drawings, they make a volume irresistibly humorous.
- British Books - Volumes 21-22; Volumes 74-75 - Page 45, 1901

... but I don't think whoever decided to compile them for publication was doing Monkhouse a favour. 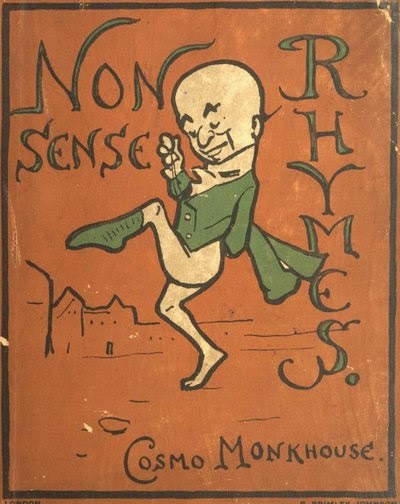