I just ran into an episode set in Exmouth, in Fred T Jane's 1895 future-war novel Blake of the "Rattlesnake": Or, The Man who Saved England : a Story of Torpedo Warfare in 189—., which imagines Britain in ocean-going conflict with a French-Russian alliance.

Posing as Russians to hide their preparations for a counter-attack, the hero's forces come ashore to Exmouth and a tense situation:


Lying in shore all day, and getting provisions and water, — which we took without asking, for the people had all fled from the town, — we left as night came on; and daybreak next morning found us inside Exmouth bar, where a couple of ancient forts had been reduced to ruins by a hostile cruiser a few days before. It was a thick, heavy night coming round, and we saw nothing of the ironclads supposed to be beleaguering Plymouth, beyond a stray ship that nearly ran down No. 45, and got torpedoed in return. The Solent was our objective, and Blake did not wish to risk an alarm reaching there for the sake of destroying a few ships off Plymouth that could very well wait till we came back again.

At Exmouth, where we still posed as Russians, Blake and many others of us went ashore, to get such newspapers as were obtainable. As an English-speaking Russian, our commodore interviewed some of the principal residents under a flag of truce ; and, getting hold of one who appeared to be trustworthy, revealed his true identity to him. The latter, who was taken completely by surprise, on his part told Blake that he had sent a messenger to Lympstone, the nearest telegraph office, with instructions to wire to Exeter for troops that must already be on their way. This was an awkward contretemps : we did not wish to shoot down our own countrymen; but, on the other hand, if they once got to hear that we were an English force, the news might reach the enemy, and our great attack prove a failure. Finally, Blake decided to stay where we were under the flag of truce, and when the military arrived, — a company of the Devonshire Regiment Militia and a half battalion of volunteers, — they seemed disposed to go for our small force right away, and were with difficulty restrained. Of course, when Blake explained matters in confidence to Colonel Toppe-Higgins, the officer in command, the latter withdrew his troops, who were given to understand that an armistice was arranged till the evening ; and they spent the rest of the day in putting. up entrenchments on the hill around the church. I do not know how it was that none of them recognised our uniforms, unless it was that all naval uniforms are very similar to each other, and they could hardly be expected to be familiar with the details of the Russian one. Anyway, everybody seemed satisfied as to our foreign origin, and we were congratulating ourselves on a day in harbour without further trouble, when an incident occurred that nearly wrecked all our plans.

The residents, on learning that no fighting was likely to take place for several hours, got over their first terror; and soon we were surrounded by quite a crowd of people, curious to behold the dreaded foe. We, I should explain, were on the beach ; the townsfolk promenaded on the sea-wall to gaze at us; and it was while idly watching the procession that my eye lighted on a figure that seemed familiar to me, a lady dressed in deep mourning. She, or the people she was with, had just stopped to look at the supposed Russians, when she came almost face to face with Blake. For a moment they faced each other in silent astonishment, then, with a cry, ''Edward, my darling — my love ! you are not dead after all ! " she rushed down the steps, and Blake held her in his arms.

He would have been more than human to have been able to keep up the Russian disguise, and a moment later we were known to be English. Cheers rent the air, an enthusiastic crowd fell about us ; we were welcomed as the saviours of a nation. The news spread like wildfire; our carefully-kept secret was ours no longer; it was the property of a thousand tongues.

Then it was that Garron of the Hornet saved us. Realising that, unless immediate measures were taken, the news would soon spread beyond the limits of Exmouth, he hastened to the soldiers and persuaded the colonel to form a cordon round the town. Recognising the importance of this precaution, that officer at once posted his men, with instructions to shoot anyone attempting to force a passage through; nor was he a moment too soon, for several people were captured, some of them after a lengthy chase, who had started for the nearest telegraph office to flash the good news about the country. 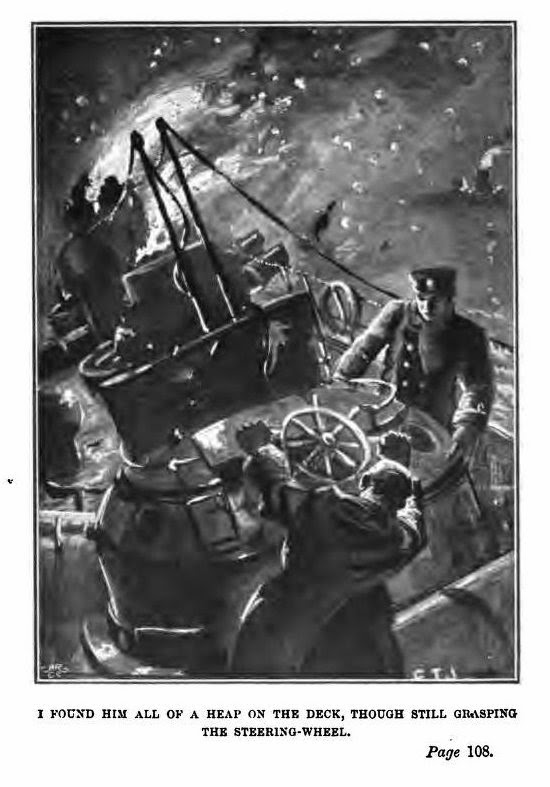 The background is rather interesting; Fred T Jane (John Fredrick Thomas Jane, 1865-1916) is of course the founding editor of the classic reference Jane's Fighting Ships. I knew he illustrated books on warship topics, but not that he wrote fiction. He knew his warships, and was an avid miniature wargamer, which no doubt contributed to making this an extremely geeky book; not only has it general illustrations of sea battle scenes, but also a deck plan of the Rattlesnake and diagrams of the engagements.

The book's motive seems mixed. Jane expresses in the preface some sympathies for the cause of Admiralty reform, and the story contains many polemical elements: an indictment of the government hampering the Admiralty's decision-making in its own area of expertise, as well as digs at various English attitudes, such as lack of patriotism. In that, the novel is in tune with the "future war" genre of the era, which was a paranoid (or justified - it's hard to say in hindsight) projection of the dire consequences of England being under-armed and psychologically under-prepared for a European War. But Blake of the "Rattlesnake" is in many ways more of a "what if", in that it doesn't portray a realistic enemy - for one thing, the French were not a threat in 1895 (the real worry was, increasingly, Germany). Jane seems equally interested, as a wargamer, in just seeing how ocean warfare might play out when fast torpedo boats were pitted against traditional ironclad warships. In that light, it's quite readable, even if he does wax romantic about it:


I have not sought or attempted in this story to settle any vexed questions of theories or tactics; such matters are no concern of mine. I have tried instead to work into story-form some of the romance that clings thick around the torpedo service, to set forth  some of the poetry latent in torpedo craft. ...
I venture to hope that this attempt to depict modern warfare from the Service point of view will convince the present and the rising generation that scientific advance has not yet eliminated the romance that, let peace-faddists say what they will, clings, and ever has clung around war; and that man — the vir — is not yet supplanted by man — the homo.

Addendum: a slight confession
It was only quite recently that I consciously realised that the Jane's Fighting Ships series was named after a man whose surname was Jane. Not reading this kind of book, I'd always been under the misapprehension that they were written from the persona of a rather hearty military-obsessed lady called Jane.
at 05:39