Moving to a setting just a few miles eastward from Erith ... The Long Memory (1953) is my favourite British 1950s film, acclaimed as one of the best British attempts at film noir. Having just tracked down a copy, I decided to get the 1951 Howard Clewes novel it's based on.

The Long Memory tells the story of Philip Davidson (John Mills), released from long imprisonment for murder, who returns to his old haunts on the Thames marshes, near Gravesend, nursing a grudge. He wants to get even with two witnesses - his ex-girlfried Fay Driver (Elizabeth Sellars), and the old boxer Tim Pewsey (John Slater) - who testified against him during his trial for the murder of a people trafficker, Boyd (John Chandos). The police and press are watching him, with the further complication that Lowther (John McCallum), the policeman involved in the original case, has a personal stake in the situation: he's now married to Fay, and has increasing suspicions that she may have perjured herself.

The film is a masterpiece of atmosphere, with locations on the Thames Marshes (where Davidson sets up home in a decaying barge), the backstreets of Gravesend, and the warehouses of the now-Yuppified Shad Thames - a testament to the seedy post-war landscapes of the Thames estuary. But it has older resonances too; these are the same marshes where Pip first encounters Magwitch in Great Expectations, and the film contains a number of very Dickensian melodramatic elements: false imprisonment, obsessed and wronged hero, interesting mix of characters (both respectable and low-life, with good and bad found among both), and settings that would have been familiar to Dickens (the movie location site Reel Streets traces the film's locations, many still recognisable - see The Long Memory). The critique in British Cinema of the 1950s: A Celebration (Ian Duncan MacKillop, Neil Sinyard, Manchester University Press, 2003, ISBN 0719064899) is worth reading: comparing it to a British Quai des Brumes, it comments on the film's spirit of place, its "exceptional use of landscape". Google Books also gives access to an excellent chapter on The Long Memory in the cinema crit book The cinema of Britain and Ireland (Brian McFarlane, Wallflower Press, 2005, ISBN-10: 190476438X).

The original 1951 novel The Long Memory gives an added dimension to the story.  The screenplay by Robert Hamer and Frank Harvey is a very faithful adaptation, right down to specific dialogue, with minor differences of plot. For instance, the film leads with a flashback showing Davidson to be innocent; this is only gradually revealed in the novel. Davidson has been in prison 17 years, not 12, and is much more institutionalised than in the film; and Elsa, the skinny and downtrodden Polish refugee Davidson falls in love with, is much less glamourised than Eva Bergh's immaculately-dressed portrayal. Jackson, the folksy old man who claims to own the barge where Davidson settles, is not merely a convenient helper as in the film, but a manipulative and equally needy character whose helpfulness is a gambit to buy friendship. The policeman Lowther's situation is also more complex; as in the film, he's torn between duty and the desire to keep his family together, but the book reveals a moral lapse from Lowther's own past, when he destroyed Fay's police file to hide her involvement in the Davidson case.

The settings are explicit: Jackson and Davidson first meet in the derelict Shornemead Fort (I feel sure that Clewes chose this location because of its identification with the deserted gun emplacement where Magwitch hides at the beginning of Great Expectations), and the main location of "Morocco Bay" appears to be based on the real-life Egypt Bay (which fits Clewes' description of it facing Blyth Sand, and being a mile from St Mary's Bay). Some 15 miles from Gravesend, it's a very desolate location on the present Saxon Shore Way; check out Ruth's Coastal Walk (UK), Stage 31. Gravesend to Egypt Bay for an idea of the landscape here. A number of web accounts identify Egypt Bay as the location where a prison hulk was moored, thus inspiring Dickens. But books such as The Oxford Companion to Charles Dickens (page 319) note more convincingly that that Dickens was conflating Egypt Bay, where there was a coastguard hulk, with the prison hulks he knew of as a child at Upnor.


On a bright afternoon early in November, some eighteen months ago, Philip Davidson walked along the track which follows the bend of the river east of Gravesend where the lonely marshes sweep up into Higham Bight and the white towers and turrets of the cement works at Cliffe rise out of the mist like those of a legendary citadel, bald and inscrutable.
...
Morocco Bay is about a mile from St Mary's. It faces Blythe Sand, which is in fact a mud flat stretching from Lower Hope Point to Yantlet Flats and the Isle of Grain, and is covered by a few feet of water at high tide. It is a sad, forgotten place—hardly more than a creek, and it has been used in the past as a burial ground for old barges, which are as a rule long-lived; indeed so long do they last that when they are finished they are scarcely worth breaking up; so the owners, to save the coast of breakage, are wont to run the hulks into the reeds at high tide, towing them there at night (since the practice is illegal) and, having stripped them of their identity, to leave them there to rot away. In the course of time the horizontal timbers spring and warp and fall off or are ripped off by scavengers who saw them up for use as fuel; so that at least only the spines of the ships are left, buried in the mud, and the verticals, which rear up above the reeds like gargantuan ribs, turning slowly white in the sun and wind; you would think the place a graveyard of elephants which had come there one by one to die, or a beach where a school of whales, thrown up by the sea, had expired on their backs.
- The Long Memory, Howard Clewes, 1951


The maritime descriptions are equally detailed. This was a time when, though trade had declined, sailing ships still plied the Thames: Dutch schuyts; spritsail barges (with the aft cabin that made derelict barges so convenient a dwelling); bawleys (shrimping vessels equipped with a copper for boiling the catch); and so on. The book's power of place lies in this detail, both of the marsh landscape and of the 'ecology' of its community. In the film, Davidson just moves into a beached barge, and we get little indication of why he's there, or how he'll support himself. In the book, we find how people on this run-down shoreline live: small-time maritime jobs such as shrimp fishing, 'toshers' looking for scrap on the shore, salvage (both legal and illegal), and smuggling packages thrown from incoming ships.

Both book and film - which I never tire of rewatching - provide a wonderfully intense evocation of a time and place. I suspect I like it because the landscapes have a strong resemblance to the creeks of Gosport and Portsmouth harbour I remember from childhood. The Thames Marshes at least haven't changed.

Here are a couple of clips on YouTube, and some stills. 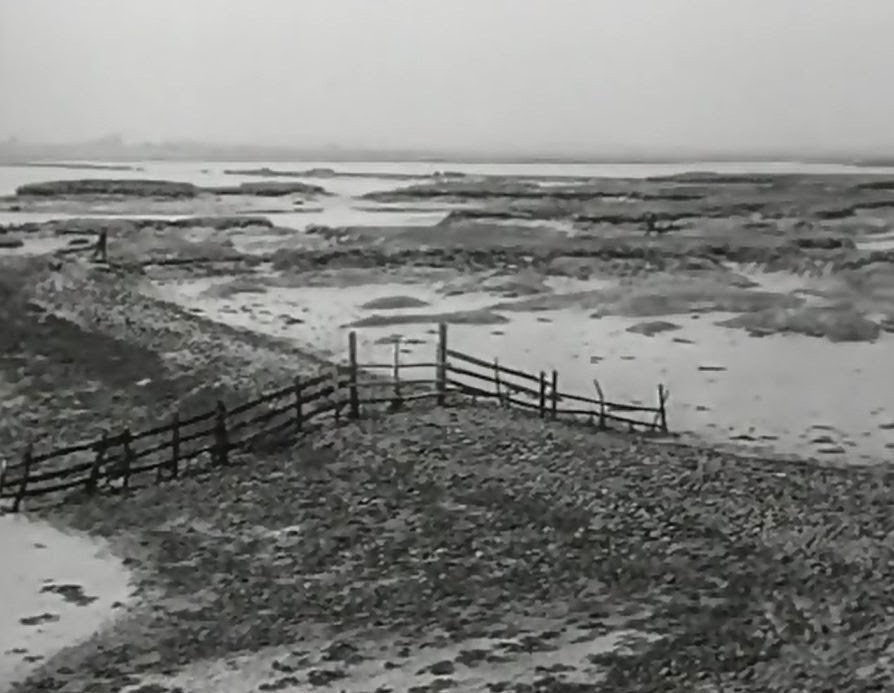