In highly unstable landslip terrains, you nevertheless find the occasional long-standing feature. Chimney Rock, just to the west of Lyme Regis, is an example: one that has been in the guidebooks for nearly two centuries. 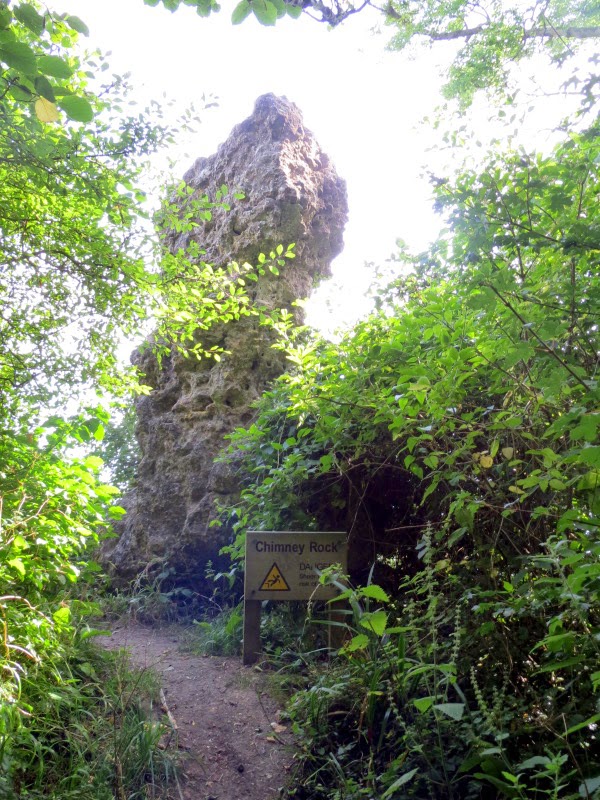 Ware Cliffs is at the eastern end of the Lyme-Axmouth landslip, and here there are several paths - signposted "Chimney Rock" - that lead off the Coast Path and steeply up the escarpment backing the Undercliff toward Ware Farm. Just below the summit is a crag of the form so familiar for the Chert Beds that top the Cretaceous cliffs of the south coast (compare Weston Plats, Hadfield's Lookout and Pulpit Rock).  There are some nice historical descriptions findable, including in George Roberts's heavily-recycled The History of Lyme-Regis:


Ware Cliffs are a short distance west of the town. Chimney Rock (which takes its name from a near resemblance to a house with a chimney on it) appears to the right, projecting from the cliff, and is covered with ivy and mistletoe of the most luxuriant growth. Parties, in their rambles, frequently call in at the dairy-house to take syllabubs, &c.
- The History of Lyme-Regis, Dorset, from the Earliest Periods to the Present Day, George Roberts, Langdon and Harker, 1823, p143.


Walking along some lovely fertile surfaces of pasturage, with rocks and mounds on either side of you, another favourite eminence presents itself, and the several beaten tracks leading up to it from the undercliff, through green bushes and bowers of clematis, afford unmistakable evidence that the Chimney Rock, a ponderous crag jutting out from the cliff, arouses the curiosity of visitors. Looking at it from a distance, it resembles a weather-beaten old castle—the abode of wicked giants, perhaps, before Jack, the hero of our nursery tales, was sent into the world to climb up his beanstalk and slay them. Ivy and other trailing plants cling affectionately around its grey solid walls, and the grounds around the "castle" seem to give you the idea that the giants at one time had splendid gardens there—gardens which are now overgrown with luxurious thickets, in which, during the gladsome spring, the "wakeful nightingale" descants her amorous song in a delirium of delight. The view from this eminence is particularly delightful. The true character of the great undercliff presents itself at a glance—its chaotic mass of mounds and boulders, of steep banks and crags, and of pretty woodland scenes of untiring variety. The deep blue sea, with white-winged craft floating gracefully upon its bosom, is sparkling in the sunshine, and in the distance can be seen the undulating hills of Dorset, rolling up towards those rocky barriers.
- Seaton, Beer, and neighbourhood: Across the landslip and out of the gates of Devon. The valley of the Axe, with brief allusions to Axmouth, Colyton, Shute, Musbury, and Ford Abbey. George Frederick Munford, The Western Gazette &c. Co., Beer, 1890.


There are some nice postcard views at the Exmouth to Milford on Sea ... 1800-2000 site, showing how the woodland cover has massively increased over the past century. 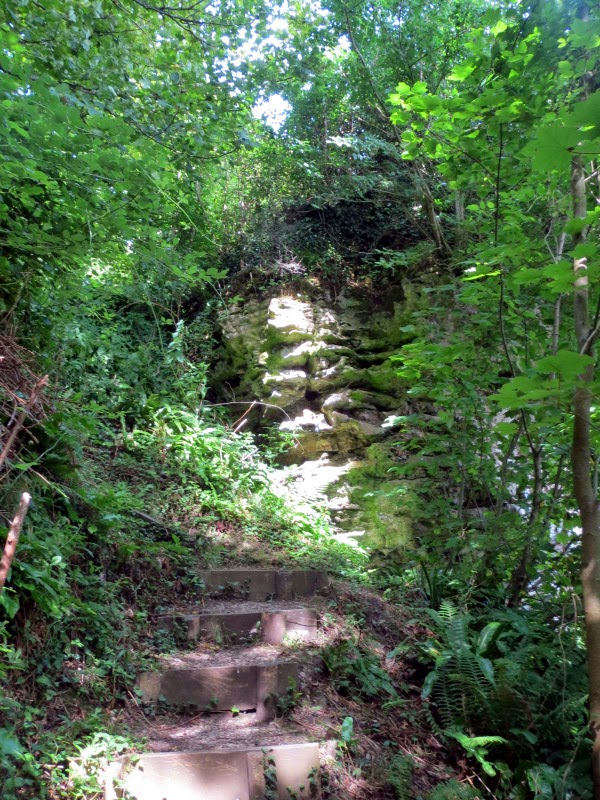 At this time of year particularly, the extensive foliage prevents there being much view from Chimney Rock. There are, however, very pleasant views from the Coast Path below; from the clifftop pastures near Ware; and of Ware House, the mansion that featured in the film of The French Lieutenant's Woman as the home of Charles Smithson's fiancé Ernestina.

I hadn't realised until checking on the map that this is actually a Devon topic. Despite its popular association with Dorset and Lyme Regis - undoubtedly fostered by John Fowles and The French Lieutenant's Woman - virtually all the Lyme-Axmouth Undercliff is in Devon (the county boundary is just to the west of Lyme). 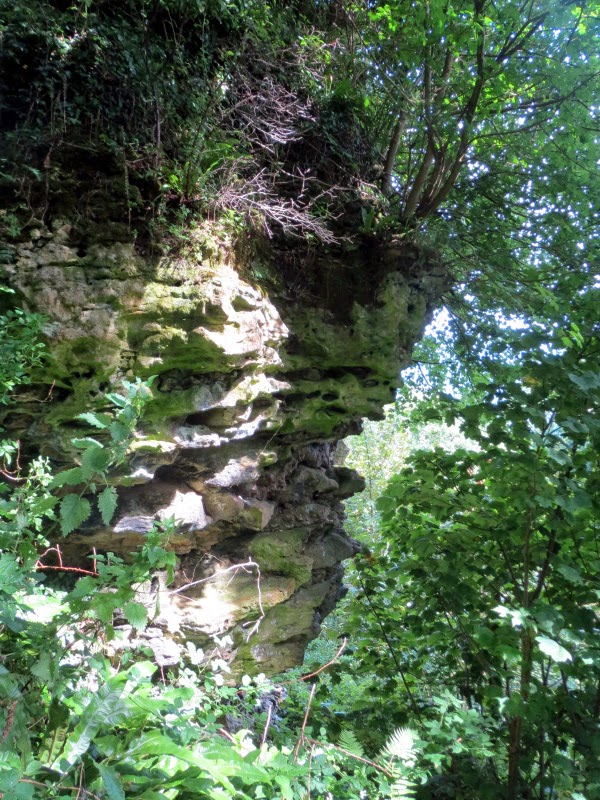 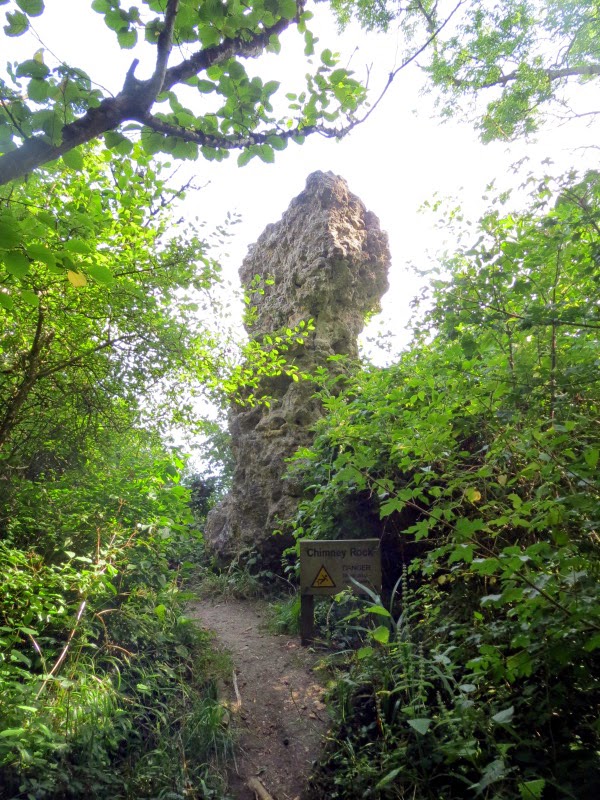 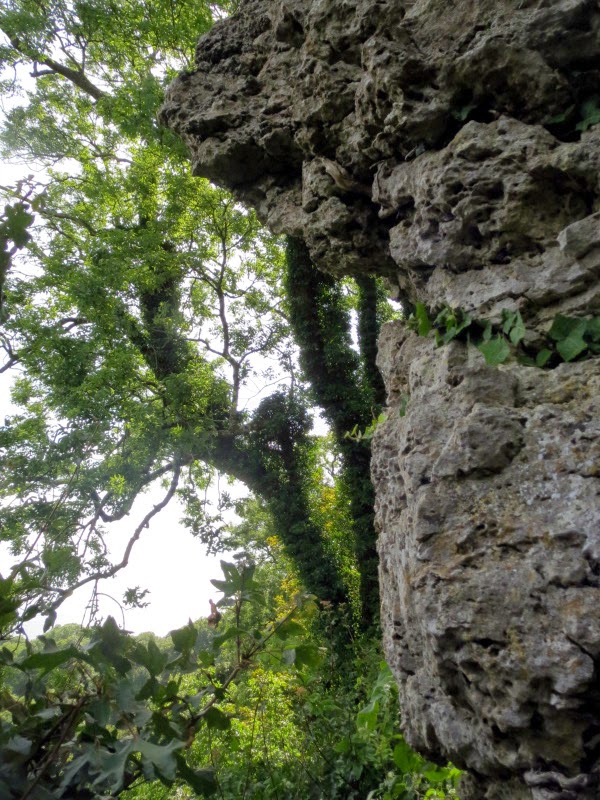