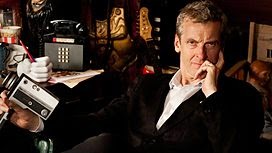 This is a repost: but this evening BBC4 just repeated its wonderful spoof documentary The Cricklewood Greats ...


Peter Capaldi embarks upon a personal journey to discover the shocking history of the stars of north London's famous film studios. Including clips from rarely seen films and interviews with Marcia Warren and Terry Gilliam.

... a graphically and textually brilliant pastiche, written by Peter Capaldi and Tony Roche, telling the century-long history of a small London studio.

In 45 minutes, it takes us from the early days with Arthur Sim's Méliès-style The Flying Pie and his stock comic character "The Little Drunk"; the strange life of Florrie Fontaine, a Gracie Fields clone and Forces sweetheart who fell from grace by becoming a friend of the Nazi High Command; the King of Horror, the classically-trained Lionel Crisp, and his role in the Quatermass-like Dr Worm (in which he undergoes a horrific transformation after being bitten by a radioactive earthworm), and his long career in Hammer-style horror; Jenny Driscoll, a glamour actress who appeared in the Carry On style "Thumbs Up" comedies that culminated in the SF-themed Thumbs Up Uranus; and the final demise of the studio, brought down by disastrous financial losses during the filming of Terry Gilliam's lost Professor Hypochondria's Magical Odyssey.

The Cricklewood Greats is a gem of intelligent comic television of a kind we seldom see. I strongly suspect BBC4 have repeated it now because of the current hype of Peter Capaldi as the new Dr Who. Nevertheless, it's highly worth watching.

If you're in a region where it's available, it's currently available on BBC iPlayer for the coming week: The Cricklewood Greats.

Addendum: I also recommend An Adventure in Space and Time, shown on BBC2 on Sunday. It's a one-off drama telling of the early days of the Dr Who series. Its commissioning was marked by a combination of ramshackle production values and radical hiring decisions for its time, such as a female producer (Verity Lambert), an Indian director (Waris Hussein), and the surprising casting of veteran actor William Hartnell as the first Doctor. It was especially moving as a tribute to Hartnell, who found at the end of his life a long-lasting, satisfying and popular role that dispelled his typecasting as Army NCOs.