I forgot to mention in the Chimney Rock post that I was almost at the location, Ware Cliff at the western end of Lyme Regis, of the 1685 landing for the Duke of Monmouth's failed attempt to become King of England. A quick search for sources converged on a 19th century Lyme antiquary, George Roberts - I should have looked out for him at Lyme Regis Museum (of which more later in the article).

Roberts (c. 1804-1860 - see Dictionary of National Biography, 1885-1900, Volume 48) was born in Lyme and spent most of his life there, becoming a schoolmaster and twice mayor of the town. He also produced a number of books, largely on local topics, of meticulous and still-respected scholarship. Wikipedia has a list, but I thought I'd improve on it by collating online versions:
I was especially pleased to find Account of the Mighty Landslip online - the British Library is providing an increasingly good range of digital holdings, and it and the Bodleian Library are very worth trying if you can't find something in Google Books, the Internet Archive, or the Hathi Trust. 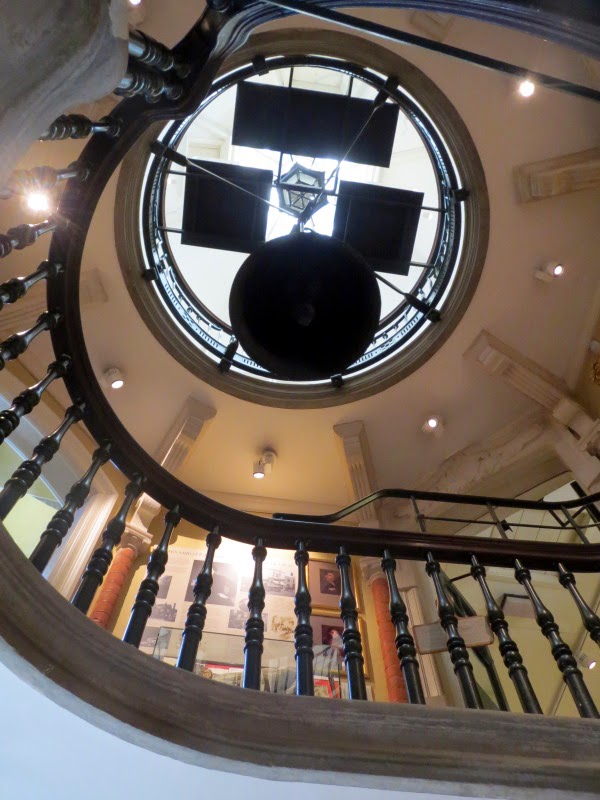 On the subject of landslips, on Saturday I finally visited Lyme Regis Museum. I strongly recommend it.

I was particularly interested in its displays on the Undercliff and 1839 Bindon Landslip, but it's altogether worth visiting: a pleasantly idiosyncratic custom-built building of three storeys around a spiral stairwell. Geology, fossils and Mary Anning are naturally central themes, but Lyme has plenty more history, including the Monmouth Rebellion and English Civil War; Lyme in wartime; dressing-up clothes to take selfies (with a prize for the most creative); an art gallery; curiosities such as Buckland's Corprolite Table and the history of Coade Stone; the "Lymiad"; a Jane Austen connection (Persuasion is partly set in Lyme), lesser-known locals such as Thomas Coram and John Gould, and modern writers such as John Fowles (a great writer but totally obnoxious person, who nevertheless Lyme has to thank for helping put it on the map) and Tracy Chevalier.

But being an Undercliff geek, I found the section on this strange landscape the highlight. Apart from models and the well-known prints from the time of the landslip, it pushes the history back even earlier to Regency times, when locals and visitors celebrated the scenery of "Pinny" (now Pinhay) and its spectacular "Umble Rock" for walks and picnics:


... and, above all, Pinny, with its green chasms between romantic rocks, where the scattered forest trees and orchards of luxuriant growth, declare that many a generation must have passed away since the first partial falling of the cliff prepared the ground for such a state, where a scene so wonderful and so lovely is exhibited, as may more than equal any of the resembling scenes of the far-famed Isle of Wight: these places must be visited, and visited again, to make the worth of Lyme understood.
- Jane Austen, Persuasion


It may be said that here a struggle seems to take place between the genius of the mountain, and that of the vale.—Here is met with fertility,—there the rugged cliff,—there the majestically towering White Chapel rocks, bidding proud defiance,—here gently swelling hills, studded with trees of luxuriant growth :— a happy combination of Alpine scenery, and Italian landscape.
...
Under the cliffs, another path leads to some detached rocks, venerably mantled with ivy and moss, which are the building places for thousands‘of Daws, that are frequently disturbed by the hilarity of Pic nic, and Gipsying Parties;—a deviation from the path, in order to obtain different points of view, exposes one to irregularities of a fatiguing character; but what! if the fair Gipsy (like a lamb rushing through a thicket) should leave a tribute of her dress on the surrounding briars? What! if her garments be soiled and torn? What! though her path be through brambles, her feet pierced by thorns? What! 'though she lose her way, and wander, twilight approaching, farther, and still further from her pic nic camp? Is not every step on romantic ground? Do not new embellishments, features, and combinations continually rise into view, causing a rapture that renders one insensible to pain or fatigue?
- A Descriptive Sketch of Sidmouth, Theodore Hands Mogridge, J. Harvey, 1838, p138

And then there's the Bindon Landslip itself, which is amply documented not merely in the geology and geography, but also in the social consequences. It was a cataclysm that, since it caused no loss of life, had no impediments to overt exploitation: a "Grand Holyday at the Land-Slip" where you could reap and buy wheat from the slipped fields; dinner parties in the "Great Chasm"; and even the publication of dance music, The Landslip Quadrille. Roberts's Account of the Mighty Landslip says that


Steamers bring parties from Weymouth, Torquay and other western watering-places. Two Ashantee princes, and many distinguished persons, have visited the spot. A thousand tickets were issued in one day in August. Persons coming from Torquay paid five shillings for the trip there and back.

You can't blame people; nowadays, the Landslip is undoubtedly impressive, but it's obscured by mature woodland cover. It must have been an awe-inspiring spectacle when it first happened. But as the Lyme Museum display notes, the commercialisation was distinctly naff, and Roberts commented that the 1840 junket was inspired by "Plutus, the god of riches". I took a few more photos: 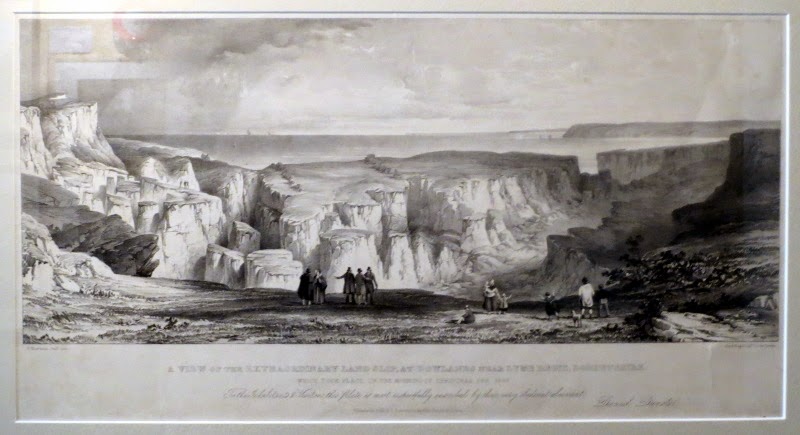 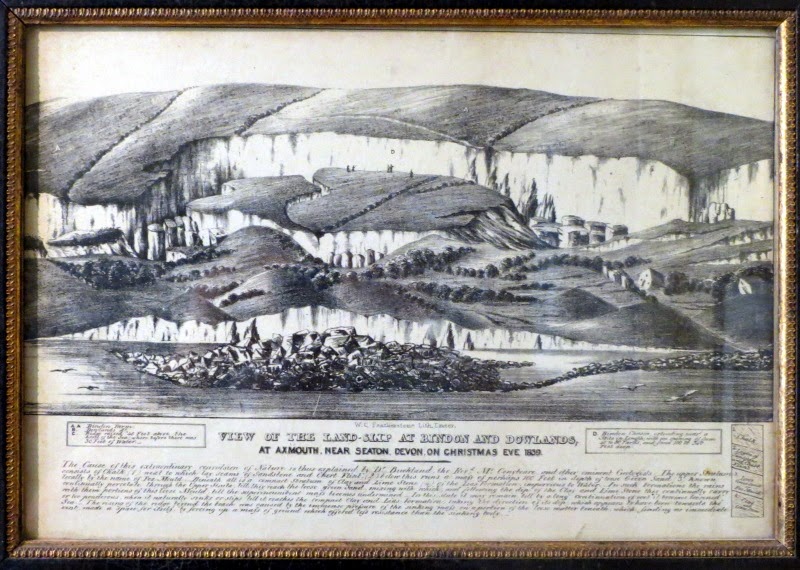 Further reading: the Lyme Regis Museum website is also worth exploring, as it has a lot of excellent 'valued-added' online material such as research papers and an exclusive link for Conybeare and Dawson's Memoir and Views of Landslips on the Coast of East Devon &c. 1840.


A few general views of Lyme and the Cobb: 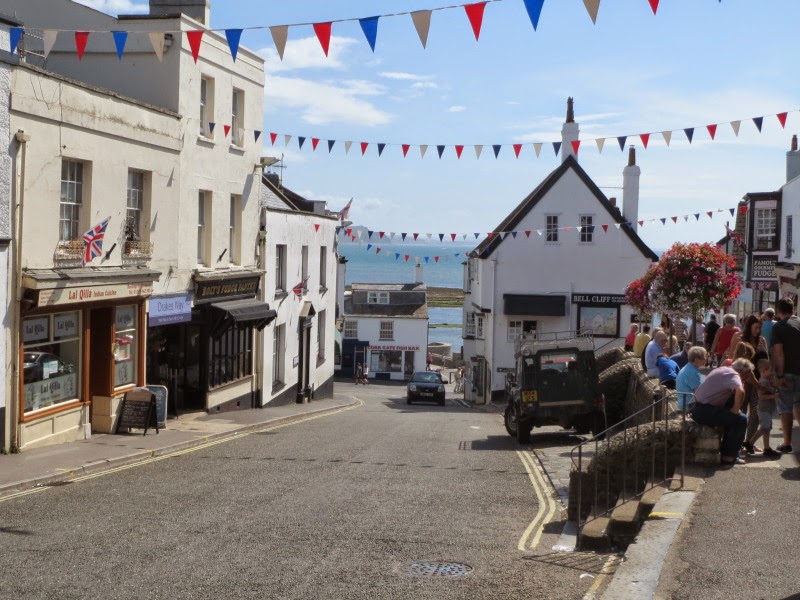 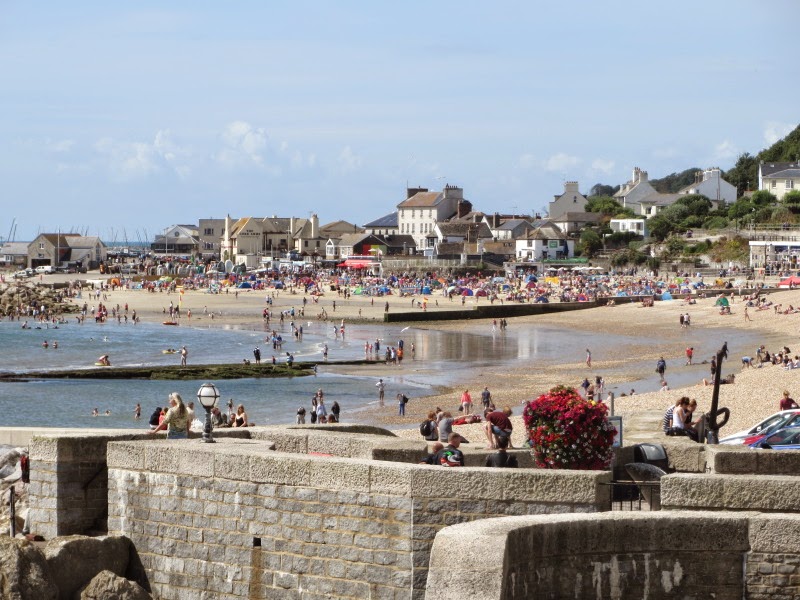 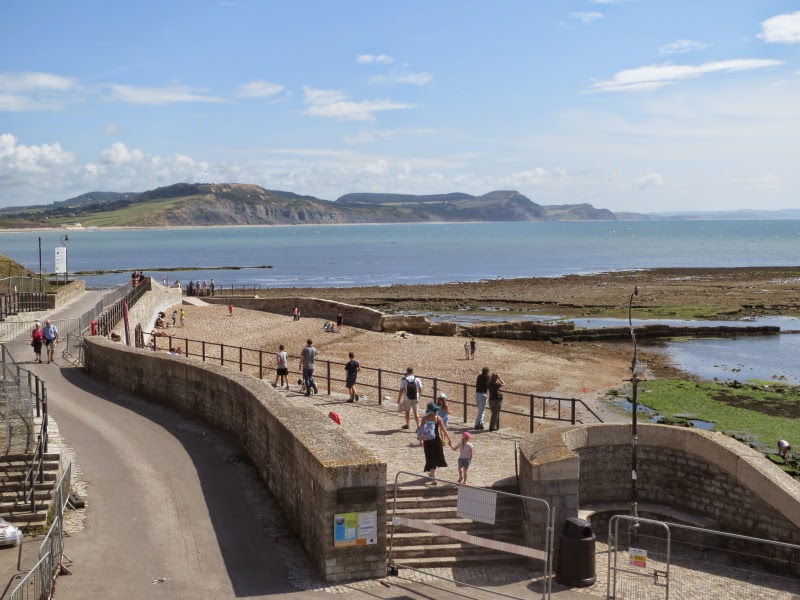 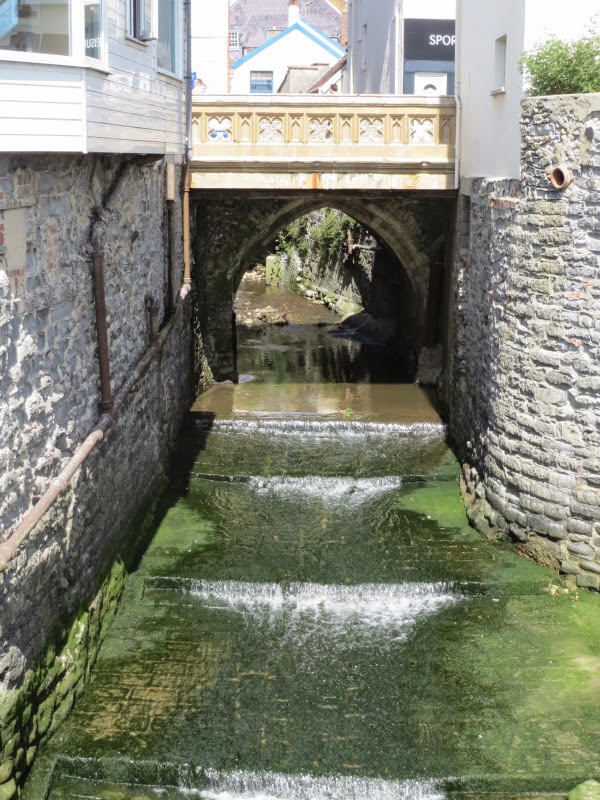 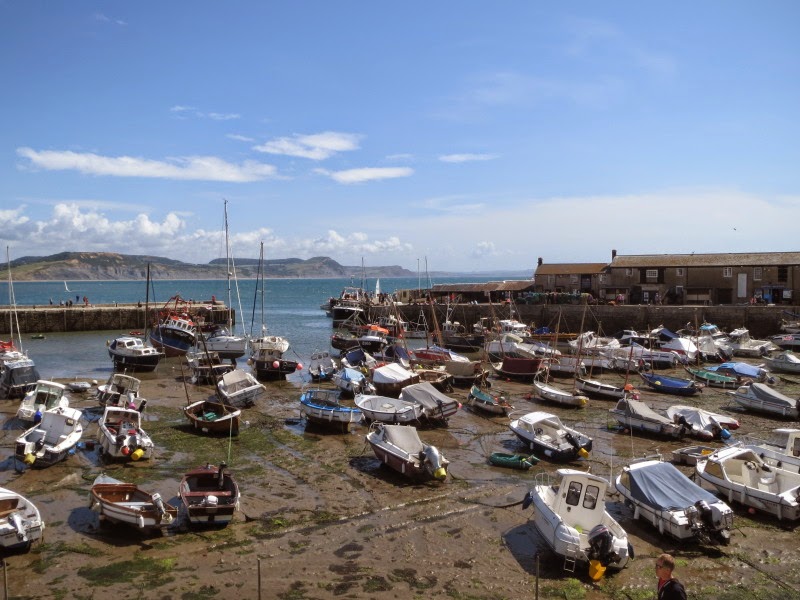 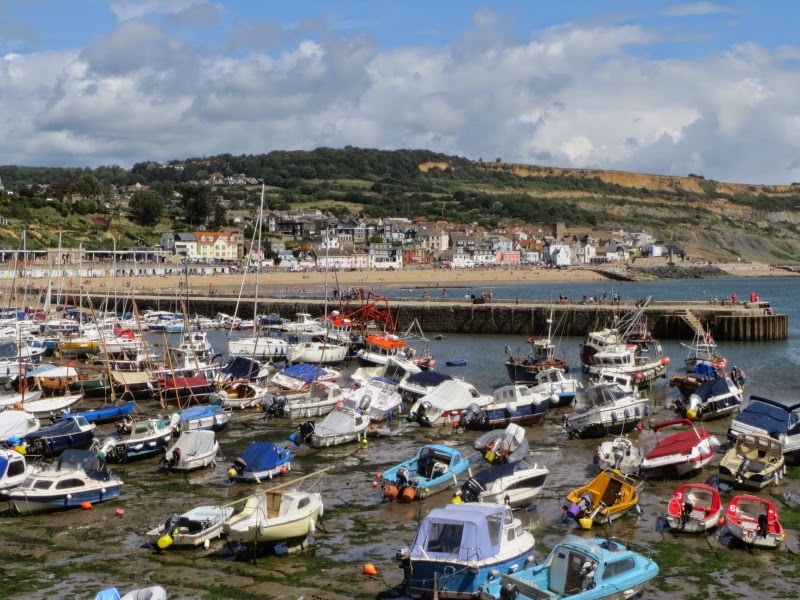 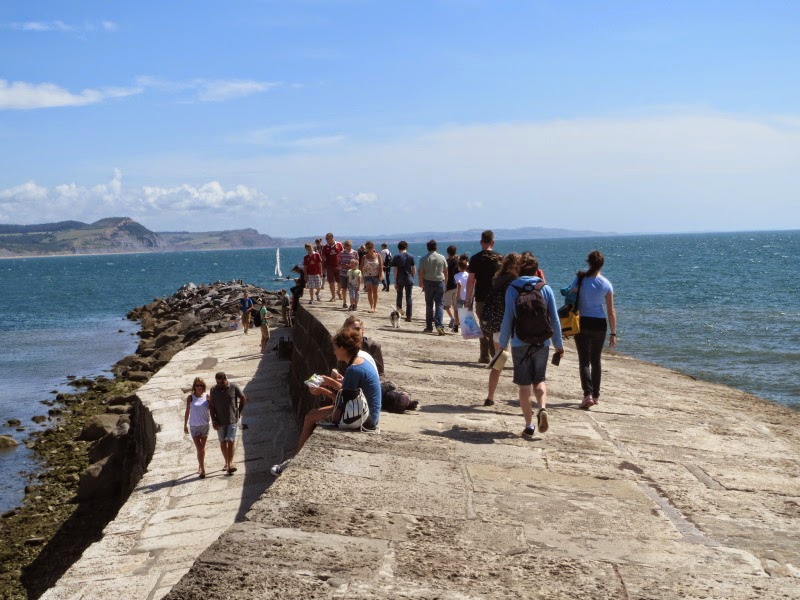