I just ran into a couple of pleasant books: the two-volume Legend Land ("Being a collection of some of the Old Tales told in those Western Parts of Britain served by The Great Western Railway"). They're compilations of GWR pamphlets, The Lines to Legend Land series - in which the pseudonymous "Lyonesse" retells folklore of Wales and the Westcountry.

I came across it via volume 2, which contains a retelling of a local story, the not-very-old Parson and Clerk legend (see Parsons unknown, 21 July 2010), with an illustration by "Cooper". 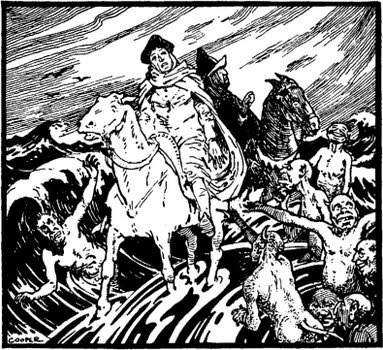 The Parson and the Clerk

All real old stories of long ago should begin with "Once upon a time," and so, once upon a time there was a Bishop of Exeter who lay very ill at Dawlish, on the South Devon coast, and among those who visited him frequently was the parson of an inland parish who was ambitious enough to hope that, should the good bishop die, he would be chosen to fill his place.

This parson was a man of violent temper, and his continued visits to the sick man did not improve this, for his journey was a long and dreary one, and the bishop, he thought, took an unconscionable time in dying. But he had to maintain his reputation for piety, and so it happened that on a winter night he was riding towards Dawlish through the rain, guided, as was his custom, by his parish clerk.

That particular night the clerk had lost his way, and, long after he and his master should have been in comfortable quarters at Dawlish, they were wandering about on the high rough ground of Haldon, some distance from the village. At last, in anger, the parson turned upon his clerk and rebuked him violently. "You are useless," he said; "I would rather have the devil for a guide than you." The clerk mumbled some excuse, and presently the two came upon a peasant, mounted upon a moor pony, to whom they explained their plight.

The stranger at once offered to guide them, and very soon all three had reached the outskirts of the little coast town. Both parson and clerk were wet through, and when their guide, stopping by an old, tumble-down house, invited them to enter and take some refreshment, both eagerly agreed. They entered the house and found there a large company of wild-looking men engaged in drinking from heavy black-jacks, and singing loud choruses. The parson and his servant made their way to a quiet corner and enjoyed a good meal, then, feeling better, agreed to stay for a while and join their boisterous companions.

But they stayed for a very long while. The drink flowed freely and both grew uproarious, the parson singing songs with the best of the company and shouting the choruses louder than any. In this manner they spent the whole night, and it was not until dawn broke that the priest suggested moving onward. So none too soberly he called for the horses.

At this moment the news arrived that the bishop was dead. This excited the parson, who wished at once to get to work to further his ambitious designs, so he pushed the clerk into the saddle and hastily mounted himself. But the horses would not move. The parson, in a passion, cried, "I believe the devil is in the horses!"

"I believe he is," said the clerk thickly, and with that a roar of unearthly laughter broke out all around them. Then the now terrified men observed that their boisterous friends were dancing about in glee and each had turned into a leering demon. The house in which they had passed the night had completely disappeared, and the road in which they stood was transformed into the sea-shore, upon which huge waves were breaking, some already submerging the clerk.

With a wild cry of terror the parson lashed once more at his horse, but without avail. He felt himself growing stiff and dizzy—and then consciousness passed from him.

Neither he nor his clerk ever returned to their parish, but that morning the people of Dawlish saw two strange red rocks standing off the cliffs, and later, learning this story, they realised that the demons had changed the evil priest and his man into these forms.

Time and weather have wrought many changes in the Parson and Clerk Rocks, not the least curious being to carve upon the Parson Rock the semblance of the two revellers. From certain positions you may see to-day the profiles of both men, the parson as it were in his pulpit, and the clerk at his desk beneath him.

The red cliffs around Dawlish make the place peculiarly attractive at first sight, and the attraction is not lessened by familiarity with the town. It enjoys the best of the famous South Devon climate; warm in winter and ever cooled by the sea breeze in summer, it is an excellent holiday centre. Historic Exeter is close at hand and Dartmoor within afternoon excursion distance.

A couple of pieces of key dialogue - such as "the devil is in the horses" - identify this as a close retelling, with local hype appended, of the version in Robert Hunt’s 1865 Popular Romances of the West of England; Or, the Drolls, Traditions, and Superstitions of Old Cornwall, Volume 1 (see the 1908 reprint at the Internet Archive: popularromanceso00huntuoft).


The writer behind these GWR pamphlets, “Lyonesse”, was a George Basil Barham (ref: Roger Burdett Wilson’s 1970 Go Great Western: A History of GWR Publicity). My immediate thought was that he must be a relative of either Richard Harris Barham, author of The Ingoldsby Legends, or his son Richard Harris Dalton Barham, who lived in Dawlish from 1863-1886 (see RHD Barham and Dawlish). He may well be, but a skim of census details doesn't find any ready connection.

His 1912 The Development of the Incandescent Electric Lamp credits him as "G. Basil Barham, A.M.I.E.E." (that is, Associate Member of the Institution of Electrical Engineers). A brief obituary in The Electrical Review, Volume 132, p. 389, 1943, says:

We regret to learn of the recent death of Mr. G. Basil Barham, who was editor of the Contract Journal from 1924 to 1941. In his earlier days he was an electrical engineer and was associated with the Edison & Swan Electric Light Co.

There's more about his work in the 1927 edition of Who's Who in Literature (Internet Archive whoswhoinliterat027238mbp), which identifies him as an editor and contract journalist:

Returning to Legend Land, the stories included are:

Volume 1 - Project Gutenberg #20170
The Mermaid of Zennor
The Stone Men of St. Cleer
How St. Piran Came to Cornwall
The Lost Child of St. Allen
The Giants who Built the Mount
The Tasks of Tregeagle
The Lady of Llyn-y-Fan Fach
St. David and His Mother
The Vengeance of the Fairies
The Old Woman who Fooled the Devil
The Women Soldiers of Fishguard
How Bala Lake Began
The Furry Day Song (Supplement)

Volume 2 - Project Gutenberg #20249
The Church the Devil Stole
The Parson and the Clerk
The Weaver of Dean Combe
The Demon Who Helped Drake
The Samson of Tavistock
The Midnight Hunter of the Moor
The Lost Land of Lyonesse
The Piskie's Funeral
The Spectre Coach
St. Neot, the Pigmy Saint
The Old Man of Cury
The Hooting Carn
The Padstow May Day Songs (Supplement)

(I spot at least one familiar name: Tregeagle, the "ropes of sand" man: see Ropes of sand: a Teignmouth penance). 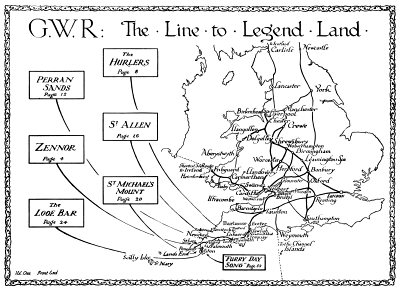