For me, the highlight of the current Town Fayre Week was today's open day - the first, as far as I know - of Topsham's Freemasons' Hall, home of Brent Lodge No.1284. As I'd never seen inside a Masonic Hall, and my knowledge of freemasonry came largely from popular stereotype and Kipling's The Man Who Would Be King - it was an altogether interesting experience. 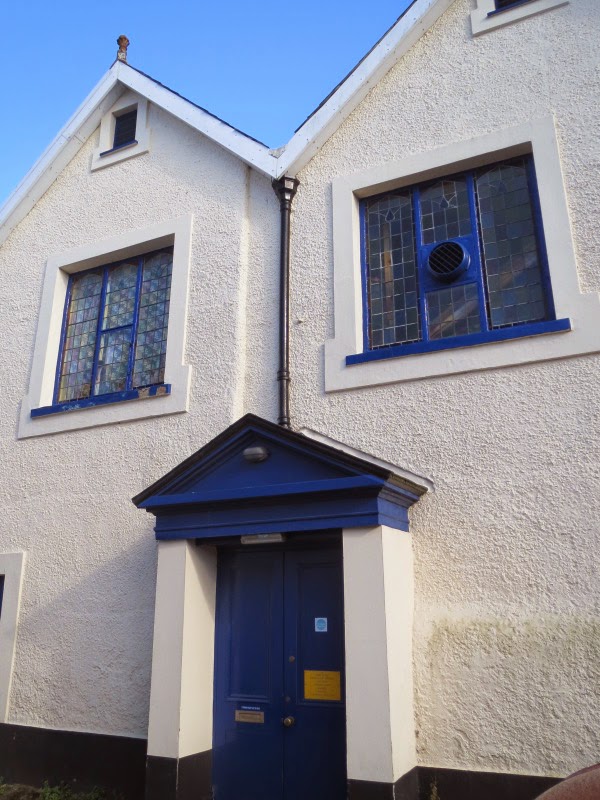 Brent Lodge No. 1284 takes its name from its founder, Colonel Robert Brent, previously Master of The Lodge of Union No. 650 in Starcross. Consecrated in May 1870, the Brent Lodge originally met in Globe Hall, premises at the rear of the Globe Hotel. But following disputes with the landlord in the early 20th century, the Lodge bought its current premises, a former Presbyterian Unitarian chapel (ref) on Victoria Road, and has operated there since 15th March 1930.

The Freemasons' Magazine has an account of the consecration of the Brent Lodge at its original premises, which describes some of the fixtures inherited by the present Hall:


DEVONSHIRE.
Topsham.
Provincial Grand Lodge And Consecration Of Brent Lodge (no. 1,284).
The consecration of this lodge was fixed and took place on Tuesday, the 31st ult., Bro. Col. Brent, of Woodbury, being the W.M. Designate.
A somewhat novel feature in the establishing of a new lodge was here introduced, the ceremony of consecration taking place simultaneously with the dedication of a new hall, or lodge-room, which stands on a plot of ground adjoining the Globe Hotel. Its position in connection with the adjacent buildings is such that no attempt has been made to give the structure an imposing appearance on the outside, but it has a tasteful, beautiful, and costly interior. The hall is 50 feet long by 25 feet wide, and 20 feet high. At the east or upper end of the room are the W.M.'s chair, dais, and canopy. The chair and canopy is a handsome piece of work, said to have cost £50. The back is finely curved, and adorned with a representation of "the All-Seeing Eye," and the usual Masonic emblems. The seat is of crimson leather. The canopy is supported on square fluted columns in white and gold, with Corinthian capitals, and over the canopy, on a crimson panel, are placed the Brent Arms, with the motto, "Metuenda corolla draconis." At the west end of the room is the S.W.'s seat, and on the south side is that of the J.W., each fronted with a small triangular table representing white marble, and standing on a pedestal of three steps covered with chequered cloth to correspond with the carpet. On the north side of the room is a handsome chimney-piece of Beer stone, finely carved, surmounted by the Brent Arms. The room is well lighted by brilliant gilt gas burners, suspended from tasteful bosses on the panels of the ceiling, while corresponding bosses
adorn the line of cornice round the spring of the roof. The windows, which are Roman shaped, are partly filled with crimson, purple, and violet glass. The "tracing-boards," representing some of the inner and outer scenes of a Masonic lodge, are considered to be among the finest in Devonshire. There are ante rooms and an entrance hall fitted up with equal regard to appearance and taste. The architect of this building is Mr Harbottle; to whom also the credit is due for much of the admirable decoration; the builder is Mr. John Moass, of Exeter, who also supplied the seats and other moveables. The Grand Master's chair and canopy were designed and carved by Mr Sendell, of Castle-streot, Exeter, who has also executed all the wood-carving of the ceiling, and supplies the oak chairs provided for the S.W., J.W., P.M., Secretary, and Treasurer, as well as the table; a prettily-toned harmonium with which the room is. furnished was supplied by Mr Godolphin. The warrant frame has been made by the Messrs. Rowden from an old piece of oak, taken from the destroyed tower of St. Mary Major's Church, Exeter.
-The Freemasons' Magazine and Masonic Mirror, June 4, 1870, page 453


The heraldic emblems relate to Robert Brent, founder of the Lodge. The arms and crest check out in various heraldic sources as that of the Brent family ...

... but the motto (Metuenda corolla draconis—The dragon's crest/collar is to be feared) is a bit of a mystery; the Secretary told me that its relation to Brent is so far inexplicable. Brent seems to have borrowed it from someone else, as peerages list it as the motto of the Marquess of Londonderry.


As the Freemasons' Magazine account explains, the general layout of a Masonic Hall is geographical (at least symbolically): the Worshipful Master's chair is at the east end; the Senior Warden's at the west; the Junior Warden's to the south; and the north unoccupied. Though I can't pretend to understand the fine detail, the overall metaphor and symbolism strongly focus on the tools of the stonemason's craft. But I think it's fair to say that the founder Robert Brent also wanted to put some of his personal stamp on the Lodge, both in its name and the heraldic decor.

Brent obviously had no hand in the design of the current hall, as he died soon after the establishment of the Brent Lodge at its original site. His obituary in Trewman's Exeter Flying Post (March 6, 1872) gives his dates as March 1 1819 - Feb 26 1872. A surgeon by profession, he lived in Woodbury, and acquired the military rank - Lieutenant-Colonel - as commandant of the 1st Administrative Brigade of Devonshire Artillery Volunteers, one of the 'Home Guard' regiments of the Palmerston era, when there was a national fear of French invasion (ref: The London Gazette, and "Funeral of Colonel Brent", Trewman's Exeter Flying Post or Plymouth and Cornish Advertiser, Exeter, England, Wednesday, March 6, 1872; Issue 5597).

The Woodbury Local History Society Newsletter #1, December 2001, has some notes on the painting's background; it was painted by the distinguished Torquay artist Sidney Hodges, and presented to Brent on his retirement from professional practice. The portrait is distinctly glamourised: Brent headed an administrative brigade; it's of interest, however, as according to the newsletter there are no other illustrations of the uniform of the Devonshire Volunteer Artillery. Given that Brent lived at Sydney Cottage, Woodbury, the distant landscape at left could well be Woodbury hill fort.

See The Masonic Province of Devonshire site for further information. The FAQ page explains the basics of freemasonry, which is the UK's largest secular, fraternal and charitable organisation.

Many thanks to Tony Jordan, Lodge Secretary, for answering my questions and giving permission for photography.