Saturday's Telegraph review section featured Charles Dickens's well-known "List of imitation book-backs" that he ordered in 1851 from the bookbinder Thomas Robert Eeles to fill some shelves at Tavistock House. This reminded me to transcribe the titles of a similar set of spoof book spines I saw last year, concealing a cupboard in the library at Killerton House. They're not quite as creative as Dickens's, but still fun.

Pleas in Vindication of Solitary Cells, by a Bachelor of the Inner Temple
Calendarium – Rot. Claus. Et Pateat
Trapp on Fictitious Entries
Writ of Ne Exeat, by J.O. Beaune
Roses Without Thorns
Doves of Major Woodstock & Miss Featherback
Complete Art of Lying
Views of Timberscombe
Nettles for Nice Noses
Exploits of the Pretender
All Moonshine
Hobble on Corns
Crabbe on Fishes
Letters in a Vacuum
Wig Without Brains
Oliver Twistum
Collection of Farces (2 vols) 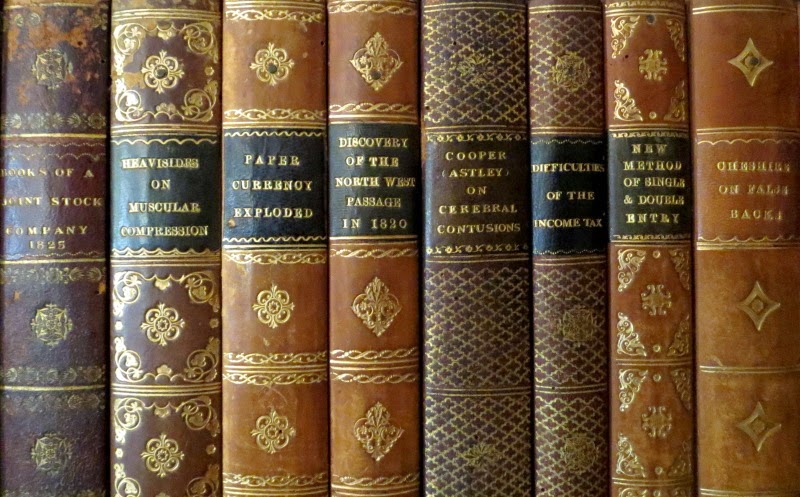 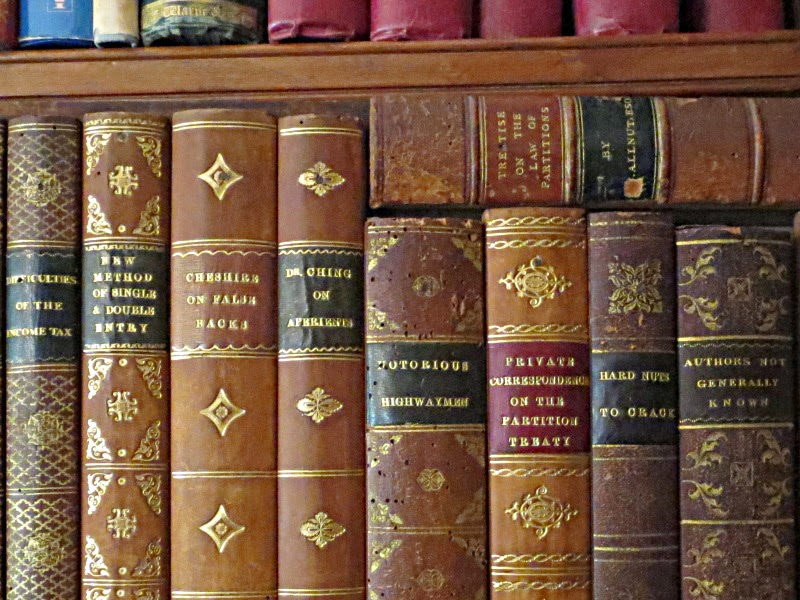 Some of these titles allude to real ones. For instance, Nettles for Nice Noses alludes to Thomas Lodge's extremely rare 1591 satire Catharos: Diogenes in His Singularitie. Wherein is Comprehended His Merrie Baighting Fit for All Mens Benefits: Christened by A. Nettle for Nice Noses. "Cooper (Astley)" is evidently the surgeon and anatomist Astley Cooper. Athene Exonienses is an Exeter joke, based on Athenae Oxonienses. Carpenter’s Socinian Controversy refers to the views of the educator and Unitarian minister Lant Carpenter, and the Socinian controversy.

Many 19th century accounts of Killerton mention more such faux books on another door that I didn't spot (I don't know if these are extant):


From this apartment there is a secret entrance into a private library and sitting-room, through a bookcase; the sham books in which case, or door-way, have on them very ingeniously-devised titles, as may be evinced by a few, namely; "Playfair on the late Formation of Trap"— " Trap on Fictitious Entries"—" Friend's Right of Entrance"—" Continuation of Chambers"—" Pasquin at Home"—" Treatise on the Law of Partitions"—" Pleas in Vindication of Solitary Cells, by a Bachelor of the Inner Temple"—" Millington on Covered Ways"—" Noah's Log-Book," and " Snug's the Word, by a Clerk of the Closet." The titles near the hinges are alike appropriate, but more quaint, viz.: "Squeak on Opening"—" Bang on Shuttings"—and " Hinge's Orations."
- Devonshire & Cornwall illustrated, from original drawings by T. Allom, W.H. Bartlett, &c., with historical and topographical descriptions by J. Britton & E.W. Brayley, 1832, page 35

This kind of thing wasn't at all unusual; The Anatomy of Bibliomania (Holbrook Jackson, University of Illinois Press, 1950) has a section called A Digression of Dummy Books (see pages 134-135 onward in the 2001 reprint) listing other examples. One such collection of titles available in detail is that by Thomas Hood, created for the sixth Duke of Devonshire's library door at Chatsworth. For example:

On the Lung Arno in Consumption. By D. Cline.
Dante's Inferno, or Description of Van Demon's Land.
The Racing Calendar, with the Eclipses for 1831.
Ye Devill on Two Styx (Black letter). 2 Vols.
On Cutting off Heirs with a Shilling. By Barber Beaumont.
Percy Vere. In 40 volumes.
Galerie des Grands Tableaux par les Petits Maitres.
On the Affinity of the Death Watch and Sheep Tick.
Lamb's Recollections of Suett.
Lamb on the Death of Wolfe.
... and many more: click for the full list
- Memorials of Thomas Hood, Thomas Hood, Mrs. Frances Freeling Hood Broderip, pub. E. Moxon, 1869, pages 54-56

Even when the books are real, it seems that one shouldn't be overawed by the book collections of stately homes; they were often bought for show, and were no reflection of the owner's erudition. Serial Publication in England Before 1750 (R. M. Wiles, Cambridge University Press, 2012) has an extensive discussion of the phenomenon of non-reading aristocrats buying books as shelf-fillers (see pages 10-13), and this was a subject of ridicule by contemporary critics. "Mr Spectator", visiting the library of a widowed society lady, "Leonora", mentions that there was


... on the paper a silver snuff-box made in the shape of a little book. I found there were several other counterfeit books upon the upper shelves, which were carved in wood, and served only to fill up the numbers like faggots in the muster of a regiment.
- The British Essayists, Volume 1, Jones, 1826, page 52


IV. Books of all sizes, warranted to please the eye, will be sold as cheap as the price of the binding. As most libraries are intended more for show than use, this esteemed article of luxury may now be procured for a trifle.— Gentlemen and ladies are entreated to take notice, that the character of a person of taste is often obtained by the possession of a neat well-chosen collection of books, and that even wooden books, if locked in a deep book-case, have helped a person to a reputation for literature; but here, if a book should have the chance to be opened, the real impression of types will be seen, and the owner prevented from the uneasiness frequently attendant on wooden libraries, that of being exposed to ridicule, and of seeing a gilded volume torn from its glue, and lacerating his brother's sides.
- Edinburgh Fugitive Pieces, William Creech, 1815, page 28

The manufacture of imitation books is still a thriving trade (Google "false books") but the intent seems more aimed at atmospheric decor than deception.