Concluding a trio of posts about Langstone Rock at Dawlish Warren: today I had a second look, with the help of the low spring tide, and found a surprising detail not visible from any of the viewpoints looking down - a perfectly straightforward way into the cove between the two sections of the Rock.


The Walk to Langstone Rocks,
About a mile along the sands [from Dawlish] towards the river Exe, is exceedingly agreeable. There are several small caverns in them, and picnic parties frequently avail themselves of the facility they present for spreading their viands and enjoying an al fresco, and it is just the spot for such enjoyment. The pools left by the receding tide hereabound with marine objects of interest such as anemones, shells, and seas weeds. Grotesque faces and fanciful figures may be traced in outline in the rocks above. There is also here a romantic looking arch produced by the smouldering away of the softer parts of the new red sandstone, leaving the mass intact as it is seen. Here, likewise, is the rock called the “Elephant,” from its imaginary resemblance to that animal when in a sitting posture.
- Cornelius's Guide, Dawlish, 1869  pages 53-54

... as does the Herapath's Journal report I mentioned previously: 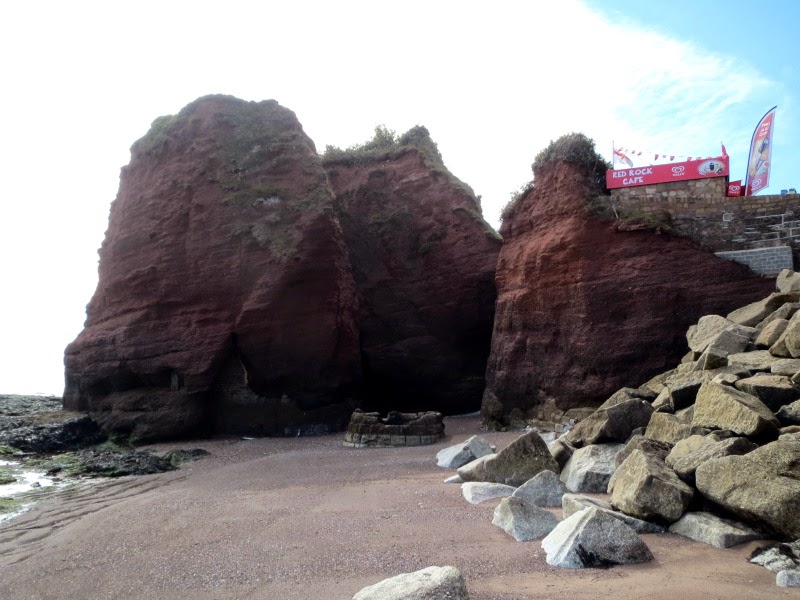 Anyhow, the low spring tide at lunchtime today made it possible to walk down the steps through the sea defences at Dawlish Warren, opposite the Pirates Cove Crazy Golf , and paddle across seaweed-covered sands to the base of Langstone Rock below the Red Rock Cafe. I still can't work out what the igloo-like structure is. The surprise is that the rock cleft visible behind the cafe goes right through the Rock, as a branching sea-cave ... 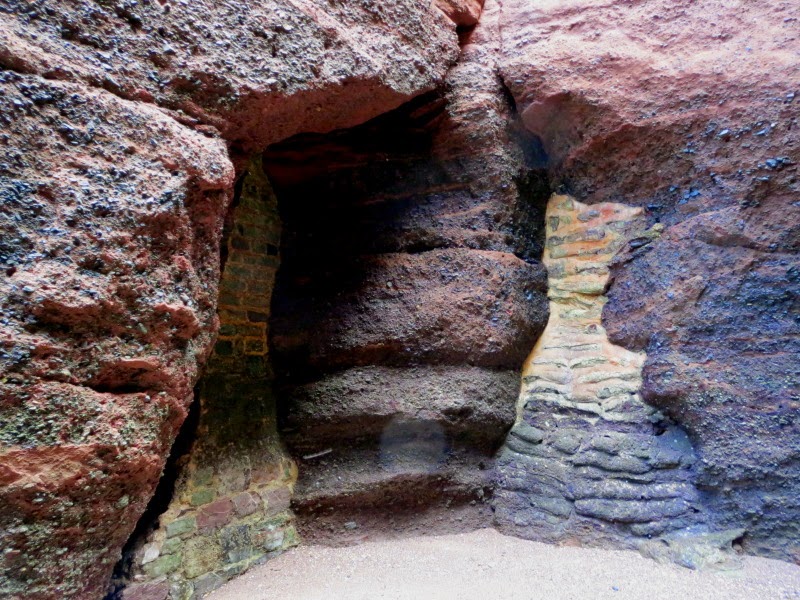 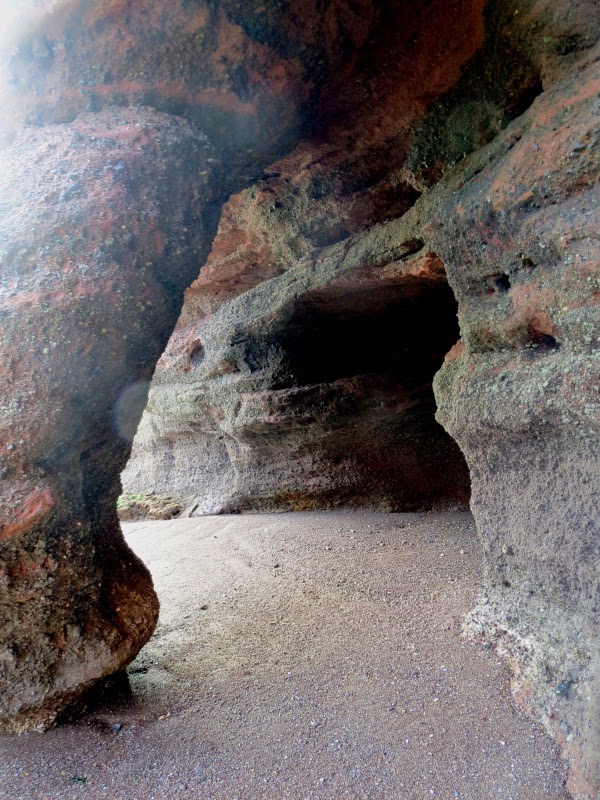 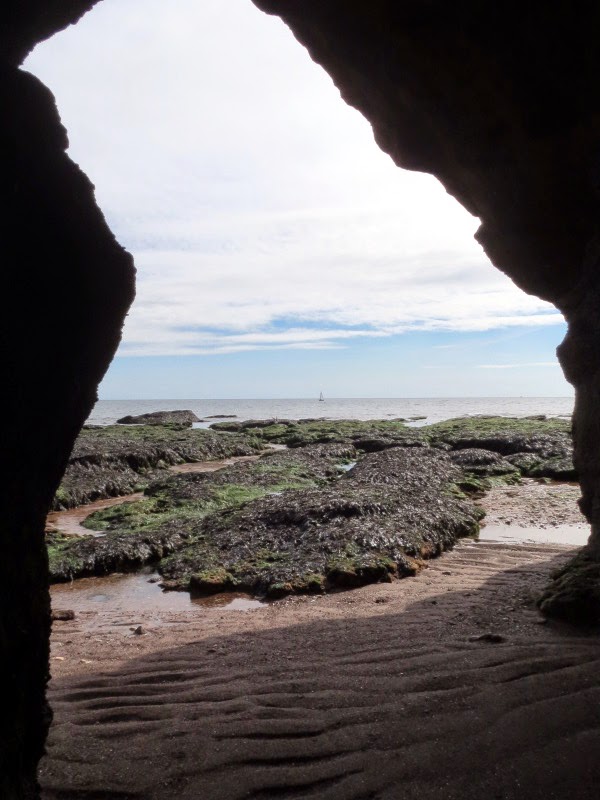 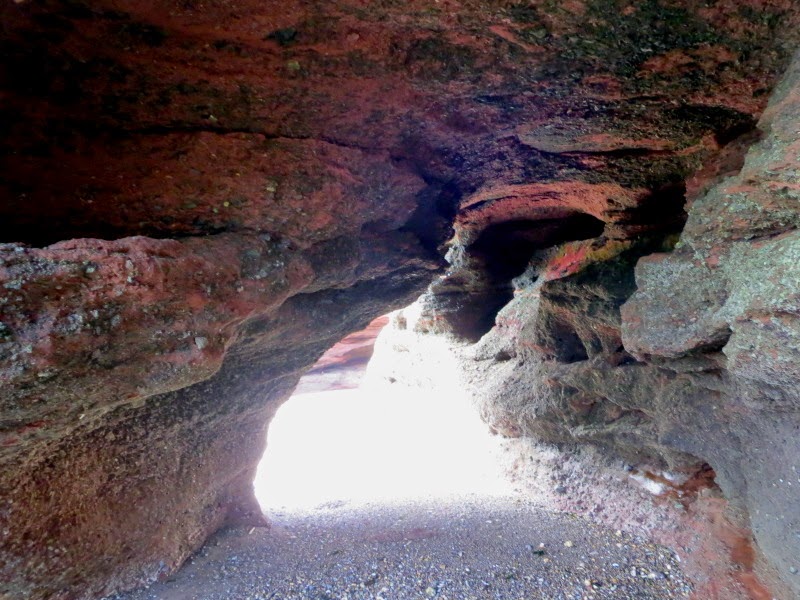 ... which comes out in the cove between the two halves of the Rock. 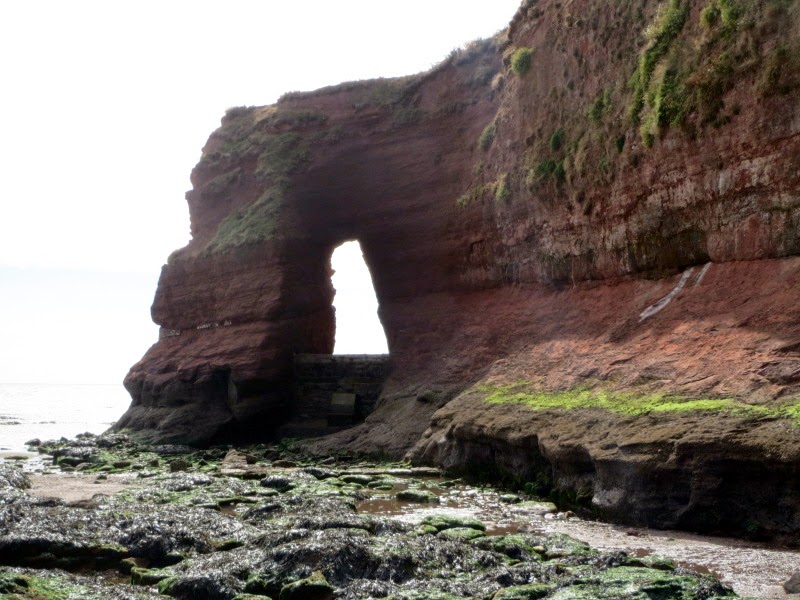 I had a peek inside the partially-bricked cave, but it rapidly narrows and doesn't seem to go anywhere. 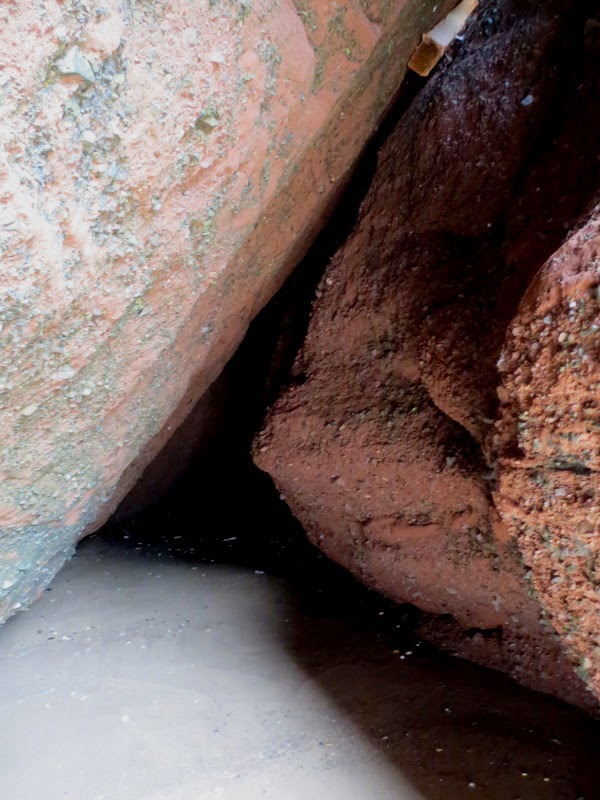 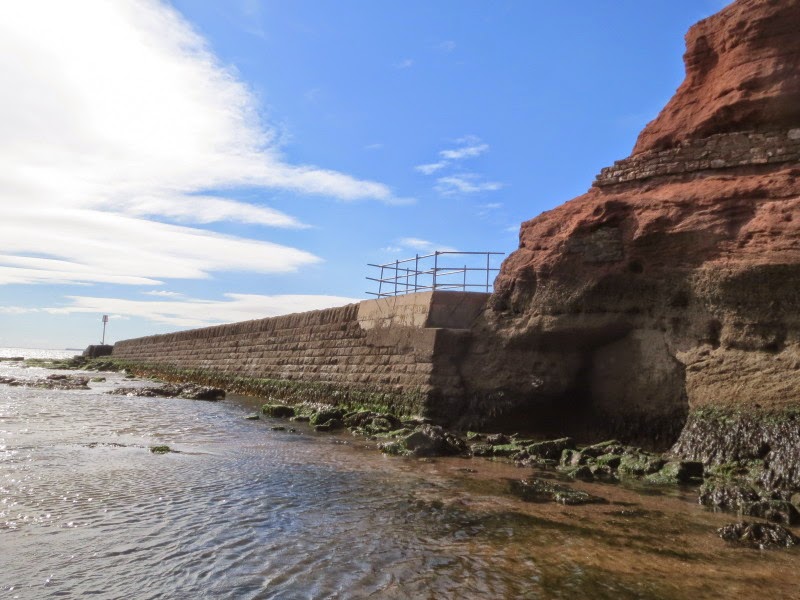 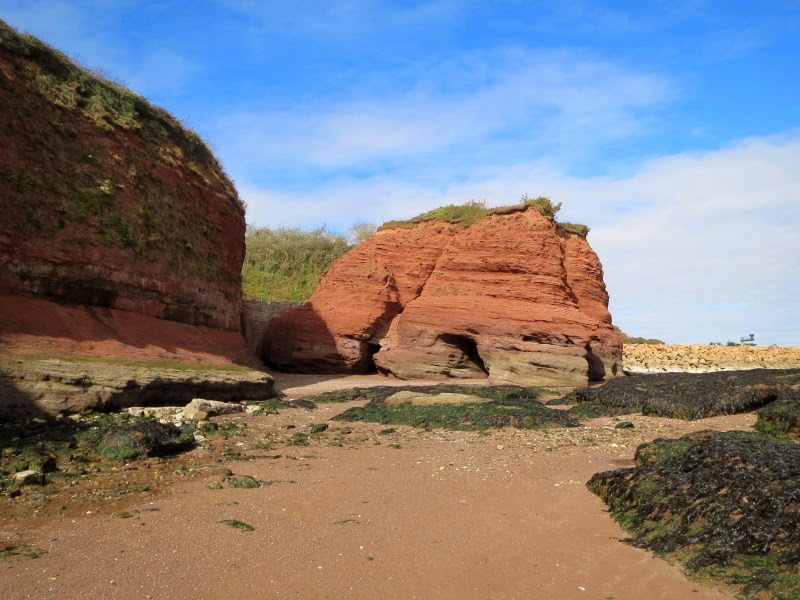 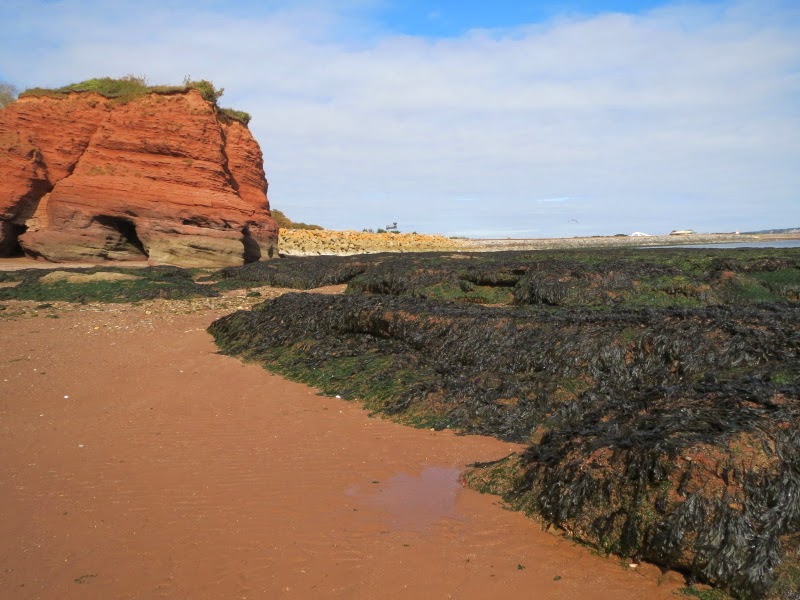 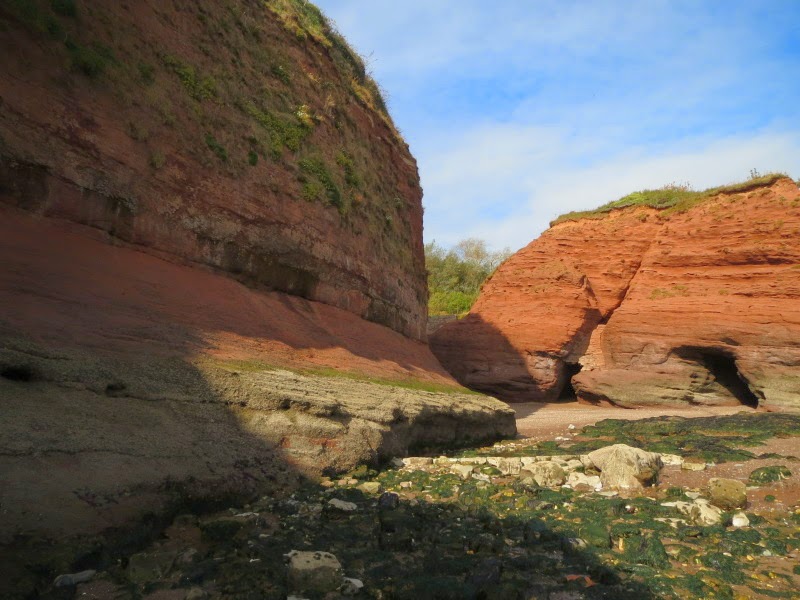 And so on back through the cave to the Dawlish Warren side: 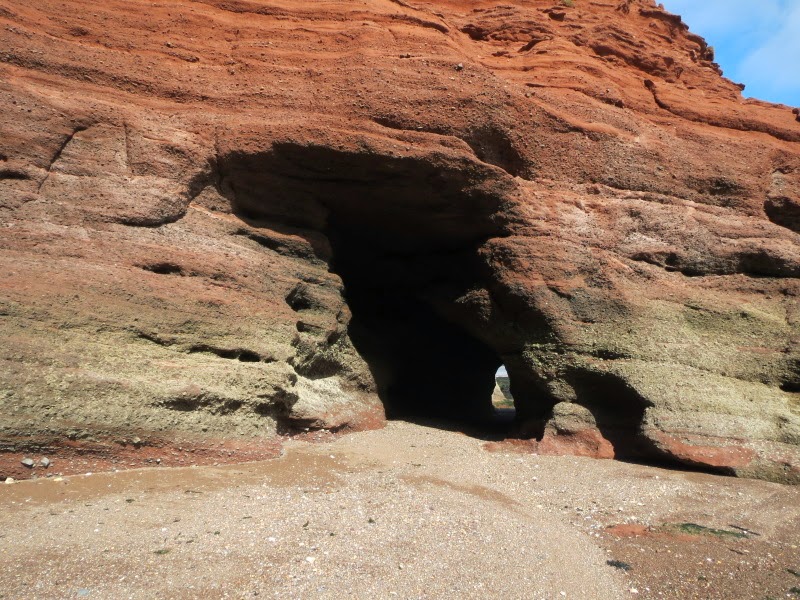 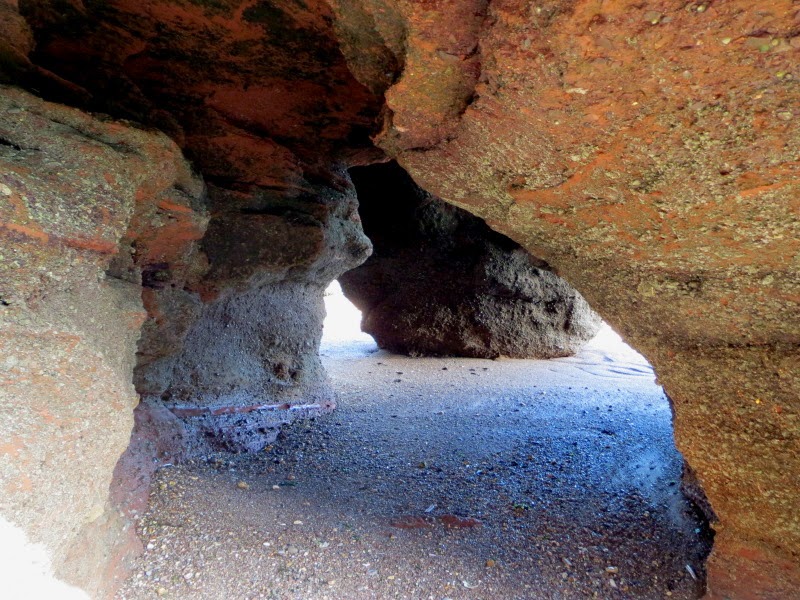 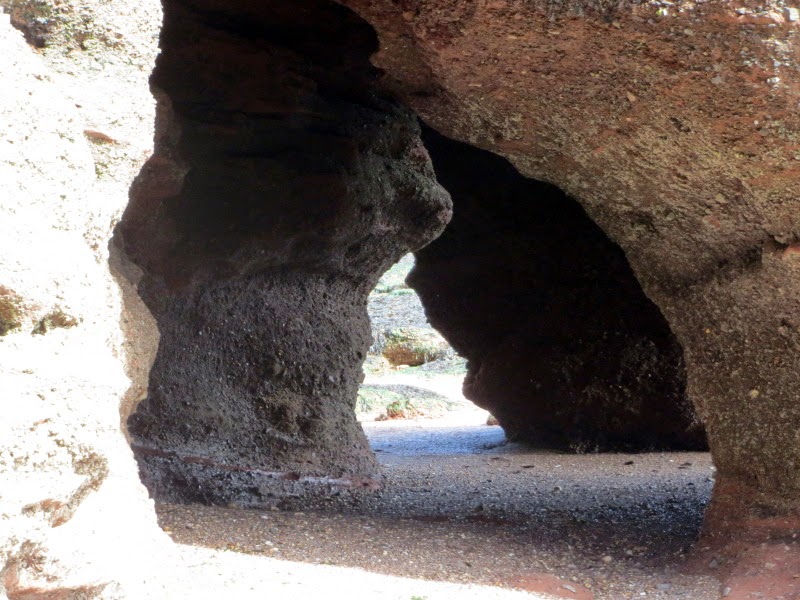 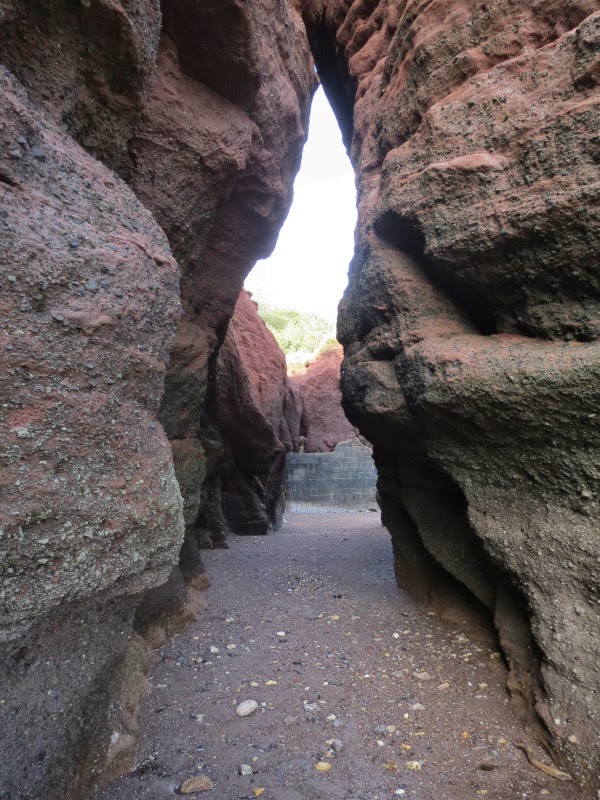 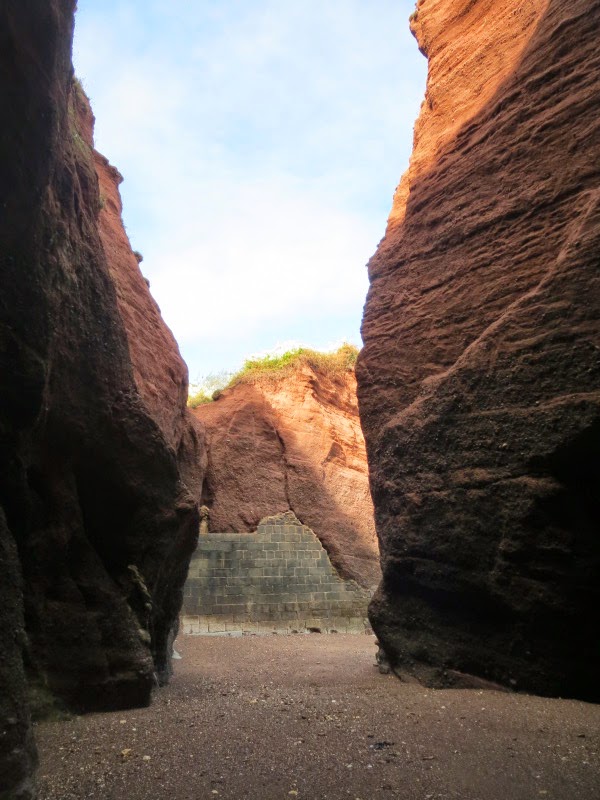 I'm not sure if I was walking through the "smugglers' caves" of the postcard - erosion rapidly alters such features - but the general location and appearance look right. As to whether smugglers actually used it ... I've mentioned before my general scepticism about the regional obsession that ascribes smuggling activity to every coastal tunnel or cave, even when the real history is more mundane (as with the Shaldon Ness "smugglers' tunnel" that was cut either to cart limestone to a limekiln or as private beach access by an aristocratic landowner). 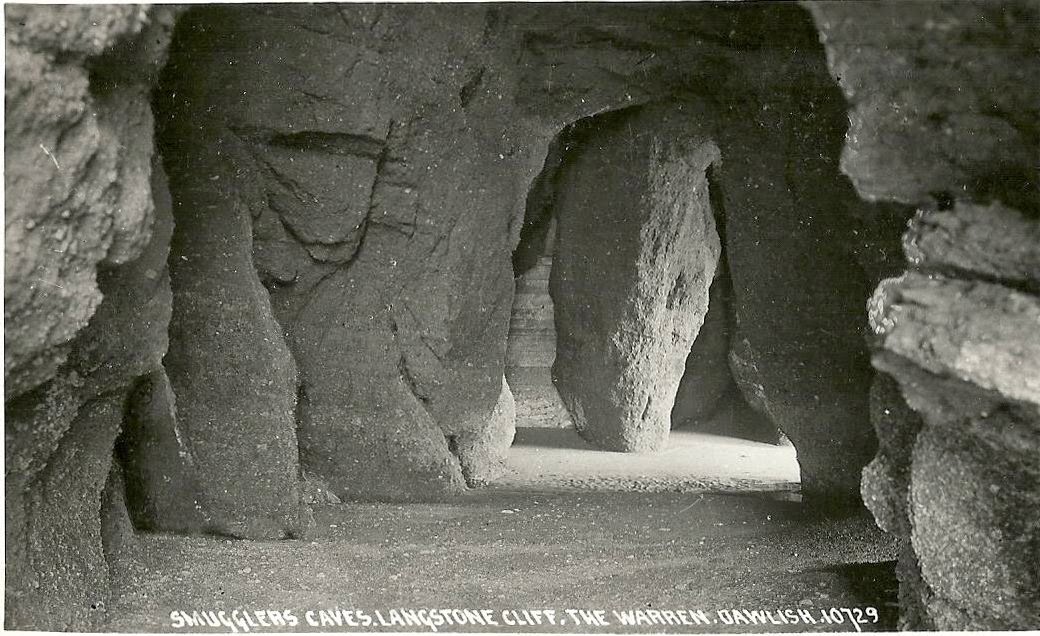