... or, Kate Bush meets coastal geomorphology. The Express & Echo, Exeter, is one of many publications to report on the coastal erosion threat to the singer's mansion in the South Hams, Devon: Kate Bush faces a battle to save Devon clifftop home from falling into the sea (September 03, 2014).

I was interested in the geological setting, since the accounts describe the house as being near East Portlemouth, which is on the Kingsbridge Estuary opposite Salcombe, and I didn't recall the land there being landslip-prone. A trivial bit of OSI work, however, reveals the open secret of the location; all I'll say is that the mansion is between Prawle Point and Start Point, on a coastline with unusual geology.

Here around East Devon, coastal landslips are down to two main scenarios. One is straightforward sea erosion of hard but friable rock; this is typical of the recent slips between Dawlish and Teignmouth, and near Sidmouth. The other is due to harder rocks overlying softer strata; you get slumping when the underlying softer rocks are eroded or liquefy after prolonged rainy weather. That's typical of the landslips of Hooken and the Axmouth-Lyme Undercliff. 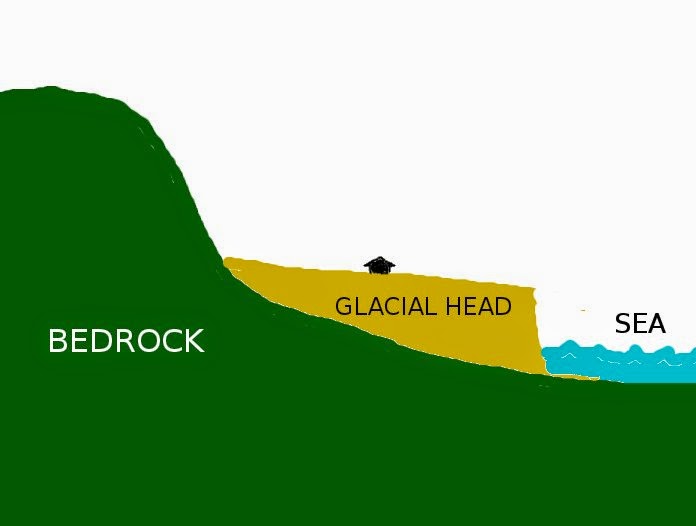 However, the South Hams scenario differs in there being a solid bedrock of greenschist (a tough and old metamorphic rock) which supports a layer of 'periglacial head' (very recent compacted glacial deposit) which forms a raised beach. The situation appears idyllic - a flat south-facing sward backed by the rugged outcrops of the former sea cliff - and it naturally has appealed to a few developers. However, the material of the raised beach is soft and prone to rapid erosion, hence the problem with the location of the Bush mansion. (The threat may not be that dire; other news images show that the Express & Echo one is extremely foreshortened, and the house isn't that close to the edge - my cynical side wonders if this whole story was cooked up to provide a bit of drama in association with Kate Bush's current return to the music scene).

The raised beach runs all along this six-mile coastal section, which is a Site of Special Scientific Interest - see the devon.gov.uk geological guide Prawle and Start Points - and a very striking landscape. It's a kind of undercliff, though not the kind I'm used to; I think it must go on my "to-be-walked" list, though as the South West Coast Path page Walk - East Prawle and Prawle Point indicates, it's difficult to get to without a car.

Without transport, an option is to walk the Coast Path round the whole peninsula, Salcombe to Torcross, though 12.6 miles is more than my usual efforts. As the news reports mention, part of the path had to be diverted last year due to a cliff collapse: Lannacombe (near Start Point) - short diversion around cliff fall. The Devon County Council bulletin Proposed creation and extinguishment: Footpath No. 8, Chivelstone (Ivy Cove) has a good image of the Lannacombe slip: 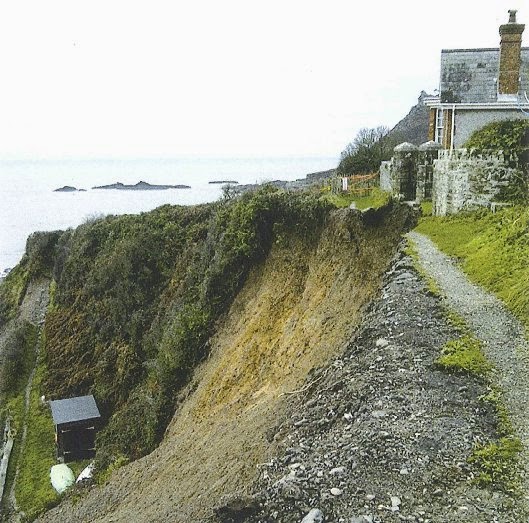 Addendum:
Raised beaches at various levels, due to multiple changes of sea level during successive glaciations, are a significant feature of the South Devon coast. A good paper is The Raised Beaches and Strandlines of South Devon (AR Orme, Field Studies, Vol I, No. 2. 1960). The lost village of Hallsands was built on one such feature, the Ipswichian (last interglacial) '25-foot' raised beach; and you can readily see other examples, such as below Berry Head and at Hope's Nose, Torquay.