I got so absorbed in the maritime details that I forgot the important point that the Franklin expedition got into the English folk tradition. After the loss of the expedition, Jane, Lady Franklin, sponsored seven expeditions to find what had happened to Franklin and his crew. This inspired the 1850-ish broadside ballad that evolved into the folk song Lady Franklin's Lament aka Lord Franklin aka The Sailor's Dream.


The original broadside ballad is listed in the Roud Folk Song Index, and the Bodleian Libraries' Broadside Ballads Online has several copies: Roud 487. They tend to be long on detail - broadsides were as much a medium for viral news dissemination as one for entertainment - and written in a pseudo-literary style. These are the words for the undated Bod1322 edition:


Lady Franklin’s Lament
for her husband

You seamen bold, that have oft withstood,
Wild storms of Neptune’s briny flood,
Attend to these few lines which I now will name,
And put you in mind of a sailor’s dream.

As homeward bound, one night on the deep,
Slung in my hammock, I fell fast asleep;
I dream’t a dream which I thought was true,
Concerning Franklin and his brave crew.

I thought as we near’d to the Humber shore,
I heard a female that did deplore;
She wept aloud, and seem’d to say,
Alas! My Franklin is long away.

Her mind it seem’d in sad distress,
She cried aloud, I can take no rest;
Ten thousand pounds, I would freely give,
To say on earth that my husband lives.

Long time it is since two ships of fame,
Did bear my husband across the main,
With 100 seamen with courage stout,
To find a North Western passage out.

With 100 seamen with hearts so bold,
I fear have perish’d with frost and cold;
Alas! She cried all my life I’ll mourn,
Since Franklin seems never to return.

For since that time seven years are past,
And many a keen and bitter blast,
Blows o’er the grave where the poor seamen fell,
Whose dreadful sufferings no tongue can tell.

To find a passage by the North Pole,
Where tempests wave and wild thunders roll,
Is more than any mortal man can do,
With hearts undaunted and courage true.

There’s Captain Austen of Scarbro’ town,
Brave Granville and Penny of much renown,
With Captain Ross, and so many more,
Have long been searching the Arctic shore.

They sailed east, and they sailed west,
Round Greenland’s coast they knew the best,
In hardships drear they have vainly strove,
On mountains of ice their ships were drove.

At Baffin’s Bay where the whale fish blows,
The fate of Franklin no body knows,
Which cause many a wife and child to mourn,
In grievous sorrow for their return.

These sad forbodings they give me pain,
For the long lost Franklin across the main:
Likewise the fate of so many before,
Who have left their homes to return no more.

Broadsides ofted suggested a tune for their ballads, but if not, their verse formats were easily applicable to existing tunes. In the case of Lady Franklin's Lament, at some point it became attached to the traditional Irish air Cailín Óg a Stór (also used by the earlier The Croppy Boy), and this is now the standard.

Even in early versions, the lyrics are already showing signs of mutation, and the trend with time has been toward losing the detail. The modern version very much cuts to the chase, but in the process loses Lady Franklin, resulting in an awkward gender switch in the last line, which refers to "my Franklin". The story has also acquired an Eskimo.

And now my burden it gives me pain
For my long-lost Franklin I would cross the main
Ten thousand pounds I would freely give
To know on earth, that my Franklin do live

I wonder if the Eskimo is an escapee from one of many other Franklin ballads (as I said, Franklin was a hot topic), George Henry Boker's A Ballad of Sir John Franklin - a piece of epic doggerel first published in Sartain's Union Magazine of Literature and Art, No 5, May 1850. 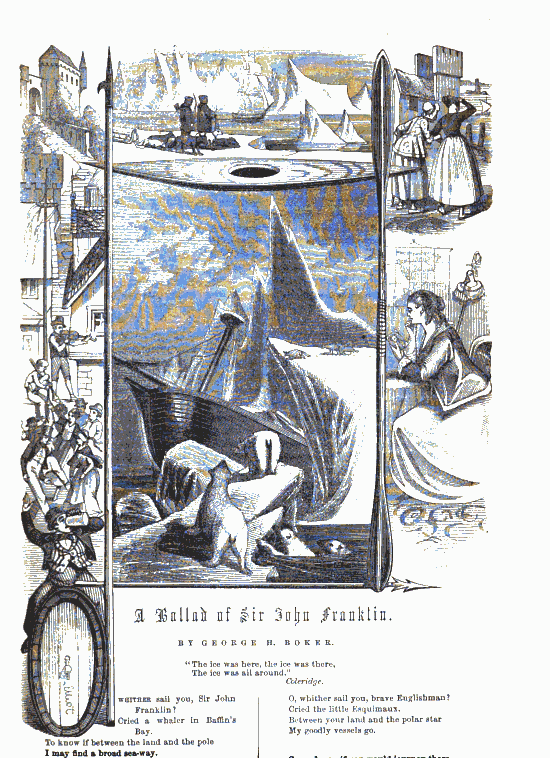