The Terror of Topsham ... perhaps

A major piece of archaeological news: BBC News reports Sir John Franklin: Fabled Arctic ship found. This is the discovery by Parks Canada of one of the two lost ships - the HMS Terror or the HMS Erebus - from Franklin's disastrous 1845 expedition in the search of a Northwest Passage.

It's unknown from the present sonar images if the wreck is the Topsham-built Terror or the Pembroke-built Erebus, as they were very similar in construction.


The Erebus and Terror were both bomb vessels. They seem to be twin ships, alike in build, in colours, in masts, and rigging, and, indeed, in every external appearance. An inexperienced eye could not tell the one from the other. The Erebus is about 370 tons; the Terror 340.
-  The Antarctic Expedition, The Gentleman's Magazine, October 1839, pp405-407

But as it's well-preserved and in only 11 metres of water, I'm sure it'll soon be elucidated. More on this in a moment...

The news provides a very good excuse to write up some notes that Ed Williams-Hawkes, owner of the Salutation Inn in Topsham, kindly sent me on the history of the Terror, about which Topsham Museum recently installed an exhibit, along with a model.

Built in the Davy shipyard in Topsham and launched in 1813, the HMS Terror was a bomb ketch: a specialised naval warship armed with heavy mortars, for which it was very stoutly-built to handle the recoil. In this capacity the Terror saw service in the War of 1812 against the USA; along with another Topsham-built ship, the 1807 HMS Erebus, it was involved in the bombardment of Baltimore that inspired Francis Scott Key to write The Star-Spangled Banner (the Congreve rockets of the Erebus were those whose "red glare" is mentioned).

The Terror saw further service in the Mediterranean, then - the sturdy construction being suitable for use in pack ice - was involved in expeditions in both the Arctic (Hudson Bay) and Antarctic (the Ross expedition), before being refitted for screw propulsion and steam power and returning to the Arctic with its sister ship HMS Erebus (a different Erebus, launched in 1826) on the Franklin expedition of 1845. During this, both were abandoned and the fate of the crews remains largely unknown. After long searching in the Canadian Arctic, the discovery of one of the ships is a stunning breakthrough.

The Franklin expedition is iconic, perhaps because it failed in sad and horrific circumstances; but Ed Williams-Hawkes is strongly of the view that it's one of the less interesting episodes of the Terror's career, and that the accolades really should go to the 1839-1844 Ross expedition to the Antarctic. This was the last naval exploration under sail alone, and Amundsen's quote stands out among many similar:


Few people of the present day are capable of rightly appreciating this heroic deed; this brilliant proof of human courage and energy. With two ponderous craft -- regular "tubs" according to our ideas -- these men sailed right into the heart of the pack, which all previous polar explorers had regarded as certain death. It is not merely difficult to grasp this; it is simply impossible -- to us, who with a motion of the hand can set the screw going, and wriggle out of the first difficulty we encounter. These men were heroes -- heroes in the highest sense of the word.
- Roald Amundsen,  The South Pole, 1912 (Gutenberg #4229)

Ross’s South Pole Squadron 1839-44
The expedition, commanded overall by James Clark Ross, involved a two-ship squadron, the 1813 HMS Terror and the 1826 HMS Erebus. It was a well-equipped and high-tech expedition; the ships were fitted with a Sylvester Heating Apparatus (a heating system using warm-air flues) and "Captain Phillips' Patent Capstan" (a geared capstan that greatly reduced the force required to turn it). Each ship had a crew of 64, and the expedition carried


stores for three years including large amounts of vegetable soup, pickled cabbage and carrots to keep scurvy at bay. There were ice saws, portable forges, winter clothing for every man and even a small flock of sheep
- Cool Antarctica, Erebus and Terror

Setting sail from the Medway in September 1839, the ships sailed south on a year-long voyage, via Christmas Island and the Kergeulen Islands, to a base at Hobart, Tasmania. From there, starting in September 1840, they made one circular expedition into what's now the Ross Sea (one overall aim was to find the South Magnetic Pole) followed by a longer circumnavigation of half of the Antarctic continent, pushing south during two Antarctic summers. The South Magnetic Pole wasn't found; they had no way of knowing (this being a moving location) that at the time this was inland, but there was plenty else to see.


The first segment of the expedition is probably the most notable in terms of sheer spectacle of uncharted landscape. The Antarctic continent is surrounded by pack ice, but Ross had information from sealers that there was a lagoon-like stretch of open water closer to the land. On 3rd January 1841 they rammed the pack ice edge to sail through looser ice, emerging on 9th January into "open polar sea" - what's now called the Ross Sea - and explored.

They named as they went: the Admiralty Range (named by Ross named them for the Lords Commissioners of the Admiralty, with a number of the peaks named after Admirality bigwigs), Cape Adare (named after Ross's friend Viscount Adare), Victoria Land, Possession Island, Mount Sabine (named after Lieutenant Colonel Edward Sabine, Foreign Secretary of the Royal Society, one of the most active supporters of the expedition); and the two southernmost volcanoes on the planet, Mount Erebus and Mount Terror (named after the expedition ships).

Ross's naming enthusiasm must have faltered when they encountered the 160-foot "Great Ice Barrier" that flanks the continent at this point, though he did name the sea at this point the McMurdo Sound (after the Terror's first lieutenant). After sailing some 250 miles along the Barrier, Ross grew concerned at the ice closing up; by 9th February the sea was starting to freeze, so the expedition reversed course and returned successfully to Hobart on 6th April.

The subsequent phases of the voyage were sheer high adventure: a semi-circumnavigation of Antarctica, with two excursions deep into the pack ice. Dangerous episodes include destruction of the Terror's rudder in a storm; a fire in the Terror's hold; a collision between the two ships; and many episodes of damage from sailing among icebegs in the pack ice.

There's a lot online about the voyage, including some primary source material. The Hakluyt Society website has a transcript of the journal of William K. Cunningham, a Royal Marine aboard the HMS Terror: The Voyage of HMS Erebus and HMS Terror to the Southern and Antarctic Regions ... The Journal of Sergeant William K. Cunningham, R.M. of HMS Terror: part 1 (Introduction) / part 2 (Journal) / part 3 (Appendices). As scientific studies formed an integral part of the voyage, see also: Zoology of the voyage of H.M.S. Erebus and Terror, under the command of Sir James C. Ross, 1839-43 (John Edward Gray et al, 1845); The botany of the Antarctic voyage of H.M. discovery ships Erebus and Terror (Joseph Dalton Hooker, 1844).

Returning to the 2014 ship find, the best coverage is presently in the Canadian media. Check out CTV News's Found: One lost ship from the Franklin expedition, which has video footage taken from an unmanned submersible; the statement from the Canadian Prime Minister; and the Parks Canada site - The 2014 Search for the Lost Franklin Expedition. The technological and historical importance of the search are heavily intermingled with nationalist and political angles concerned with Canada's assertion of sovereignty over waters that could become economically significant now that Arctic warming makes the long-sought Northwest Passage navigable.

But all that aside, this is so cool a discovery. 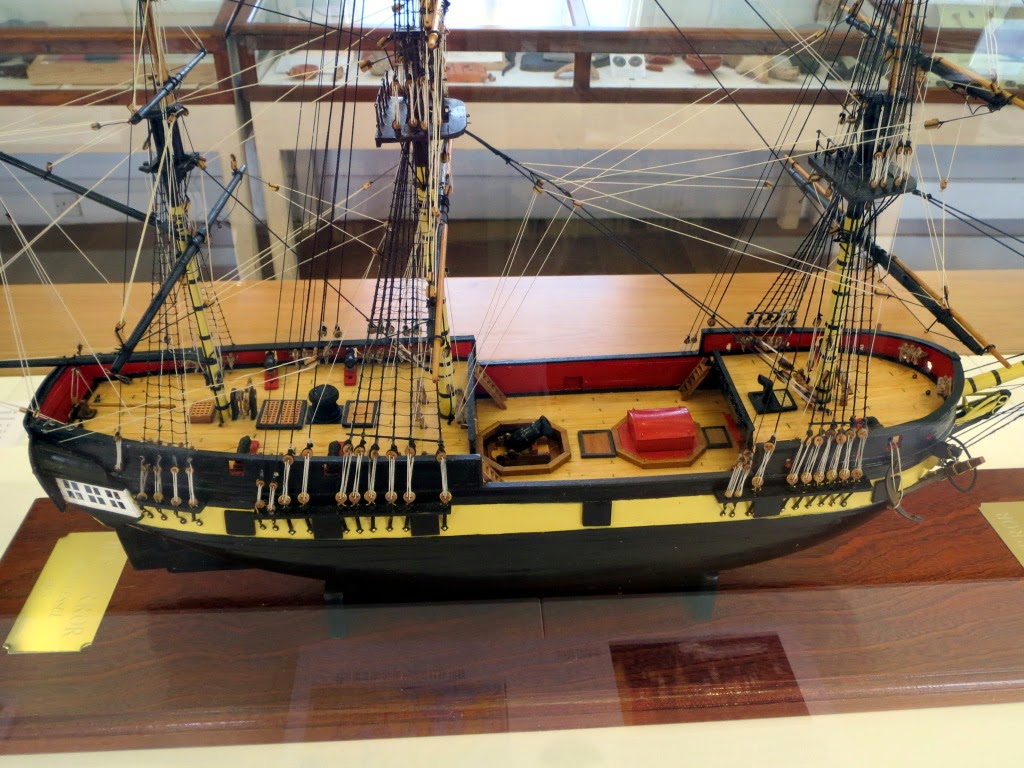 Addendum:
For a great deal more about the Terror's construction, see Building Terror - scratch building a 1:48 scale model of HMS Terror, modeller John Smith's project documentation: meticulous craftsmanship informed by meticulous research. Another excellent resource is Russell A Potter's The Fate of Franklin website ("A Multimedia Museum of the Cultural Histories of Arctic Exploration"; a particularly relevant section is Franklin in the Public Eye: 1818-1859, a multimedia collection exploring how much of a hot topic Franklin was, both alive and presumed dead.

Addendum 2:
And an important update: the wreck turns out not to be the Terror. See The Terror of Topsham ... no.