Littlecombe Shoot: down among the plats

I felt energetic on Friday, and repeated - with some side explorations - the Sidmouth to Beer 'lite' walk of almost exactly a year ago. In part I wanted a closer look at the ruins of Weston House as described in the previous post; in part I wanted to explore the unique landscape of the plats at Littlecombe Shoot.

As is pretty well known on the East Devon historical circuit, the south-facing cliffs around Branscombe were historically farmed in small fields called 'plats', occupying the bench of Triassic rocks below the Cretaceous cliffs. This use, exploiting the microclimate to produce early flowers and vegetables, declined around the end of World War 2. As this use died out, many of the plats acquired a new use as the site of holiday chalets. East of Branscombe this is very obvious; the land has been completely cleared for a chalet park with car access. But west of Branscombe, it's very different; the cliffside is highly overgrown, yet it's nevertheless a warren of chalets accessible only by a network of difficult undercliff paths. 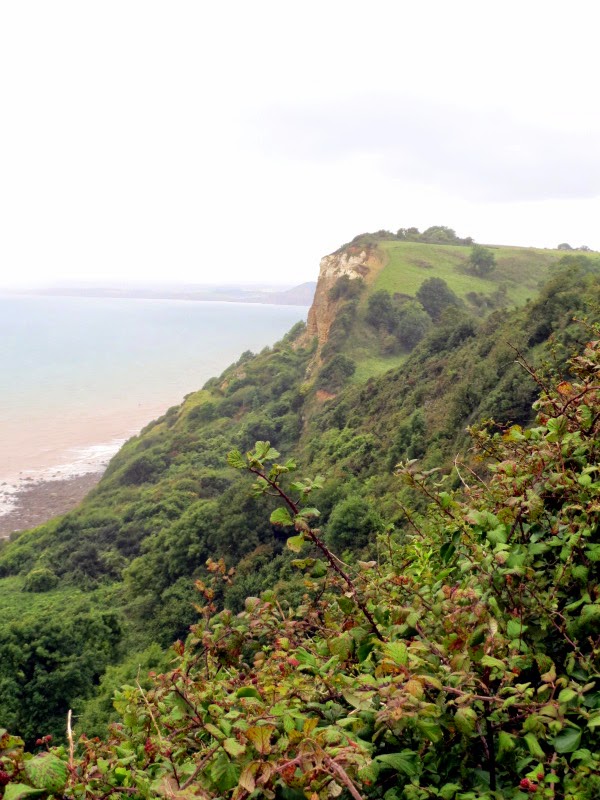 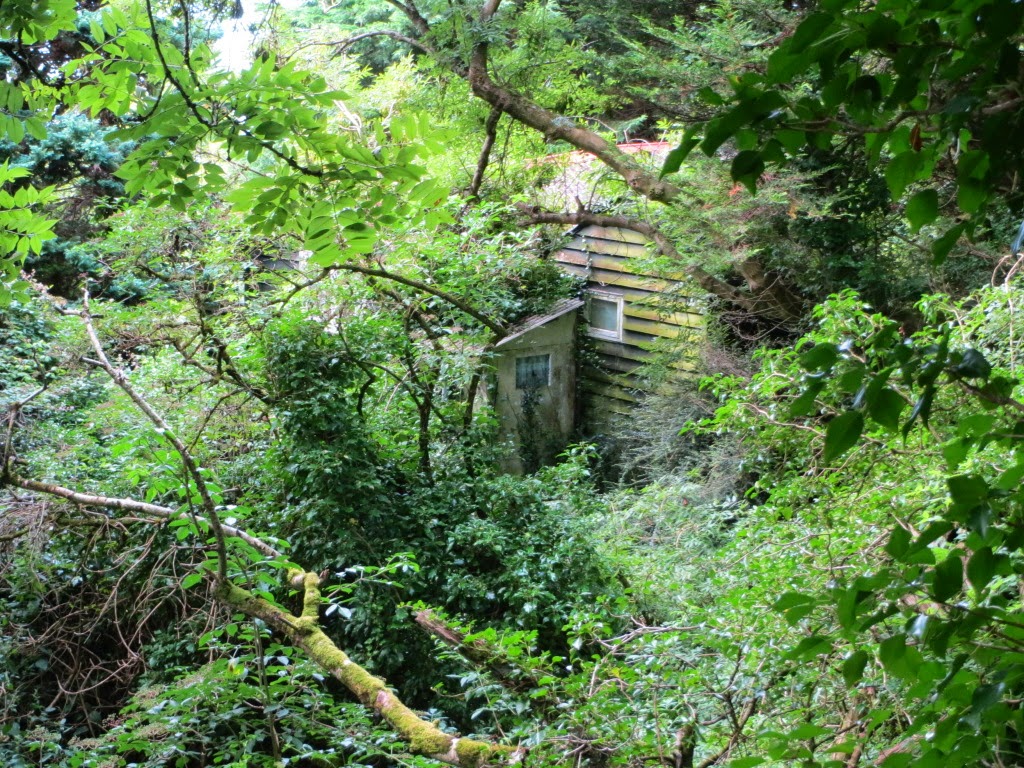 The access points at each end of this undercliff are at Littlecombe Shoot itself - the Littlecombe Shoot West Path below the clifftop signpost - and at the other side of Berry Camp, where the Coast Path enters woods. I wasn't sure if there was a through route between them, but by good luck I ran into one of the owners going to their chalet, and they gave me directions. Basically you just take the left turning after the first descent, rather than the dogleg right that leads down to the beach at Littlecombe Shoot, and keep left thereafter, avoiding any descending routes. 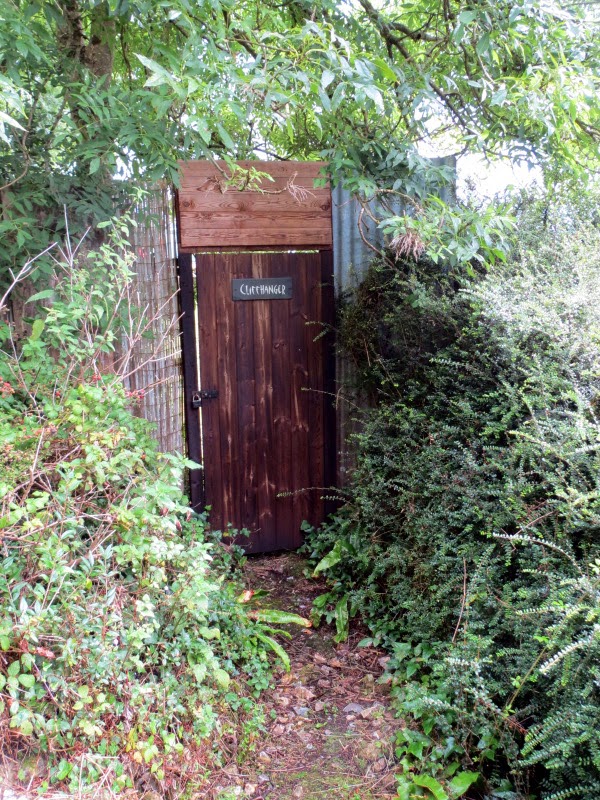 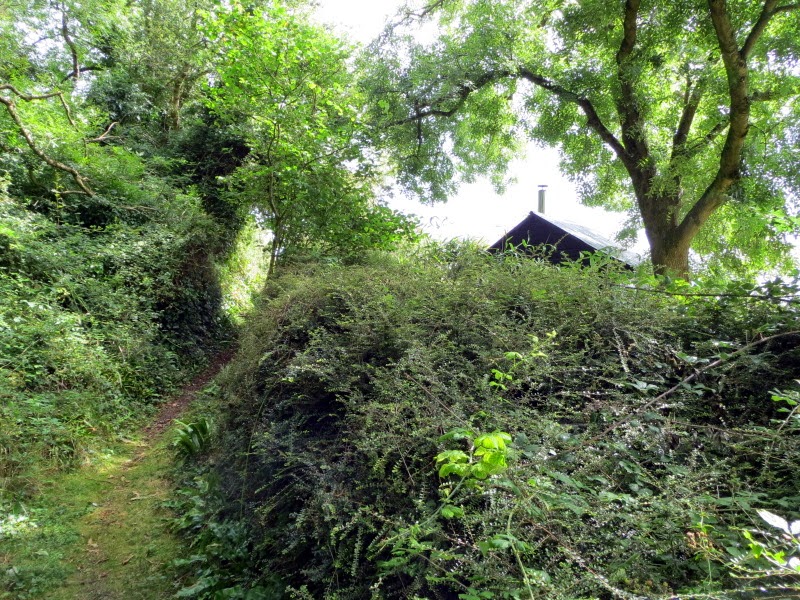 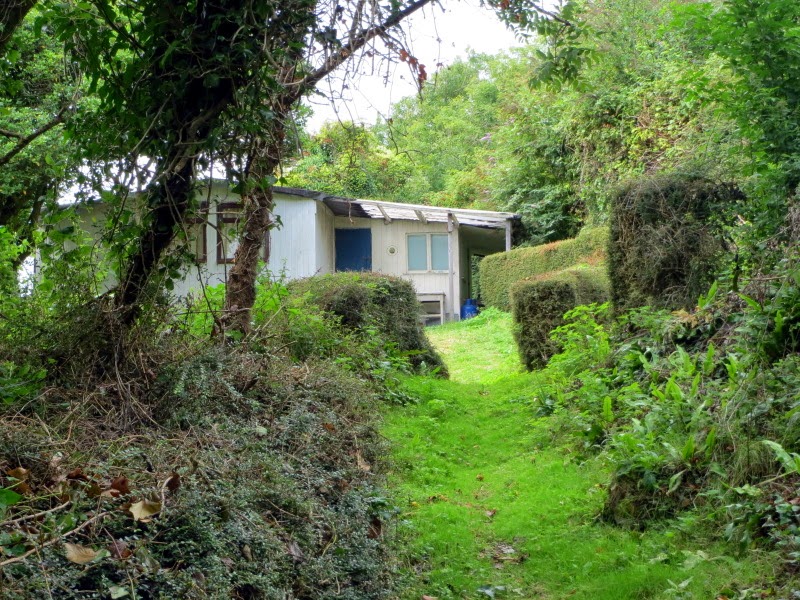 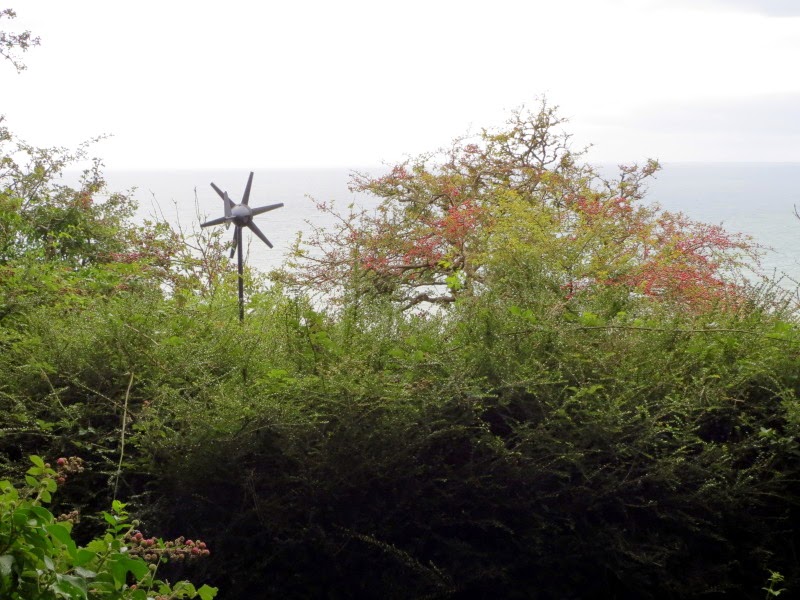 Some of the chalets - which have names like "The Eyrie" and "Cliffhanger" - are quite folksy, building on linhays (agricultural buildings) while others are very modern in style. The logistics of running a building in such a location must be fairly complicated. While chalets without mains services aren't unknown, supplies don't normally need carting down a cliff. The nearest vehicular access is the field above, and it looks serious work carrying liquid gas cannisters up and down the narrow and slippery paths. Some of the chalets have wind generators for electricity, but I don't know how they manage water and toilets. Neither does moving garden equipment - many have neatly-trimmed lawns - look much fun. 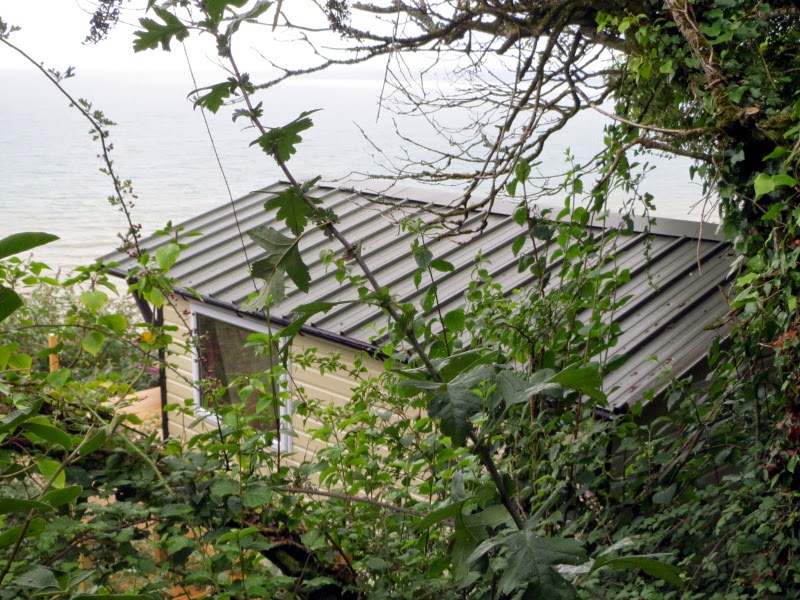 This isn't really a scenic walk; it's hard to see the 'big picture' from ground level, as the chalets are well-hidden by irregular terrain, which has large slipped blocks in places, sheer drops, and general foliage that obscures the view overall. However, there's the odd glimpse to seaward, and upward to the quaintly-named crags: Donkey Linhay Rocks and Ivy Hall Rocks. There are even stranger names hereabouts - I don't know what feature Abel's Hole is, nor Duck's Bill, and who was the Neddy Purse that Neddy Purse's House on the 1889 OS map was named after? (Actually, I can answer that one; he was probably either Edward Purse or Edwin Purse, who were mentioned on the 1851 census).

Once up out of the undercliff, the wooded Coast Path toward Branscombe Mouth has occasional breaks to seaward, and a climb to the top reveals the strange hummocky landscape that's the result of former extensive lime quarrying.