A minor detour from yesterday's walk to Berry Head leads to the topic of Brixham's subterranea: the history of its "bone caverns", and the stories of two very different styles of investigation.

Limestone leads pretty inevitably to 'karst' features, so it's not a wild surprise to find that the Brixham area's Devonian limestone geology gave rise to caves. On our walk, I said "Ooh, a cave". Clare (who is long-suffering about geeky detours - and I do so appreciate her tolerance of these things) waited while I went to have a glance at this one, readily spottable from about here ...

... if you look uphill through the woods a few yards from where the South West Coast Path meets the Berry Head Road at the end of the Shoalstone car park. 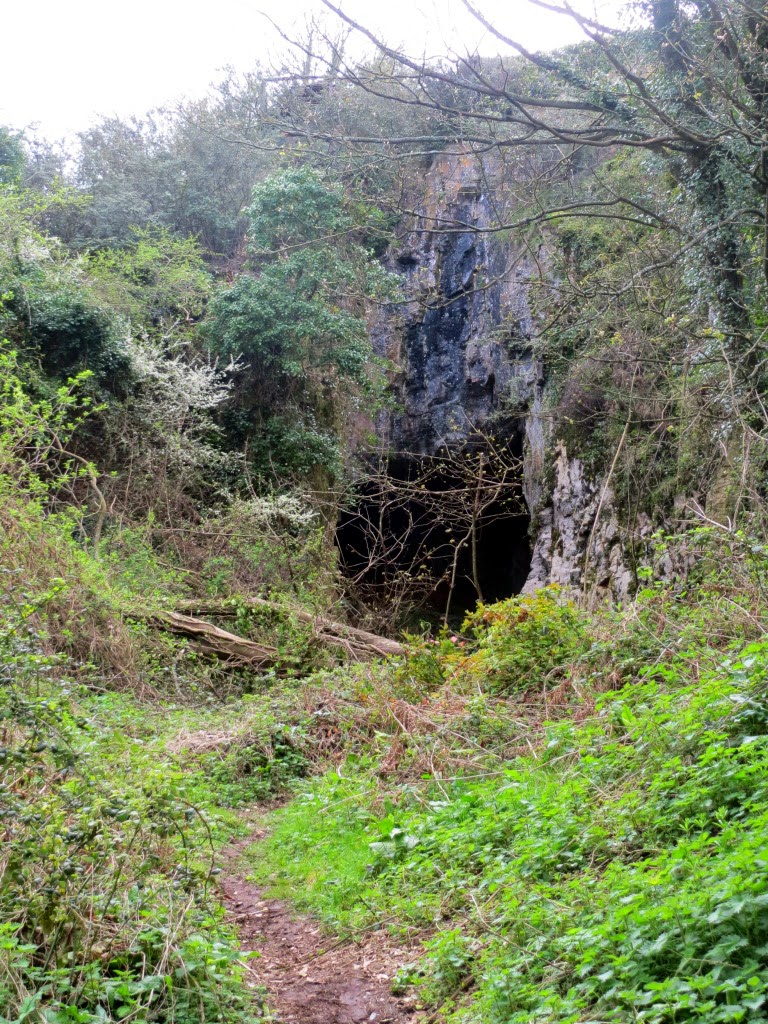 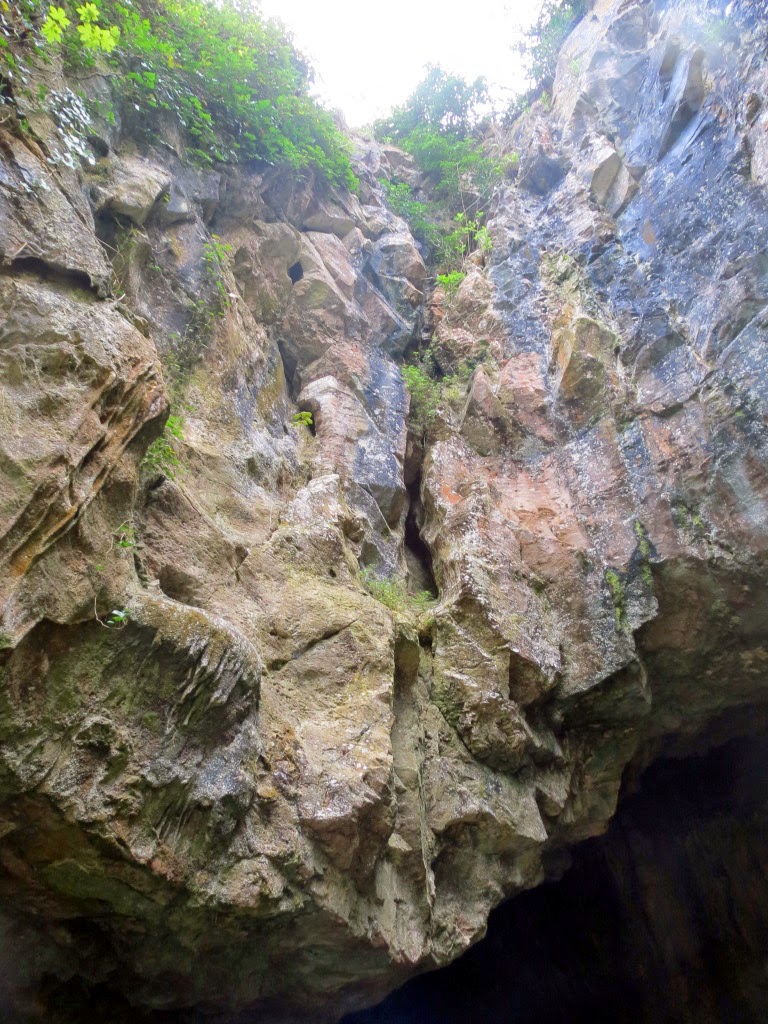 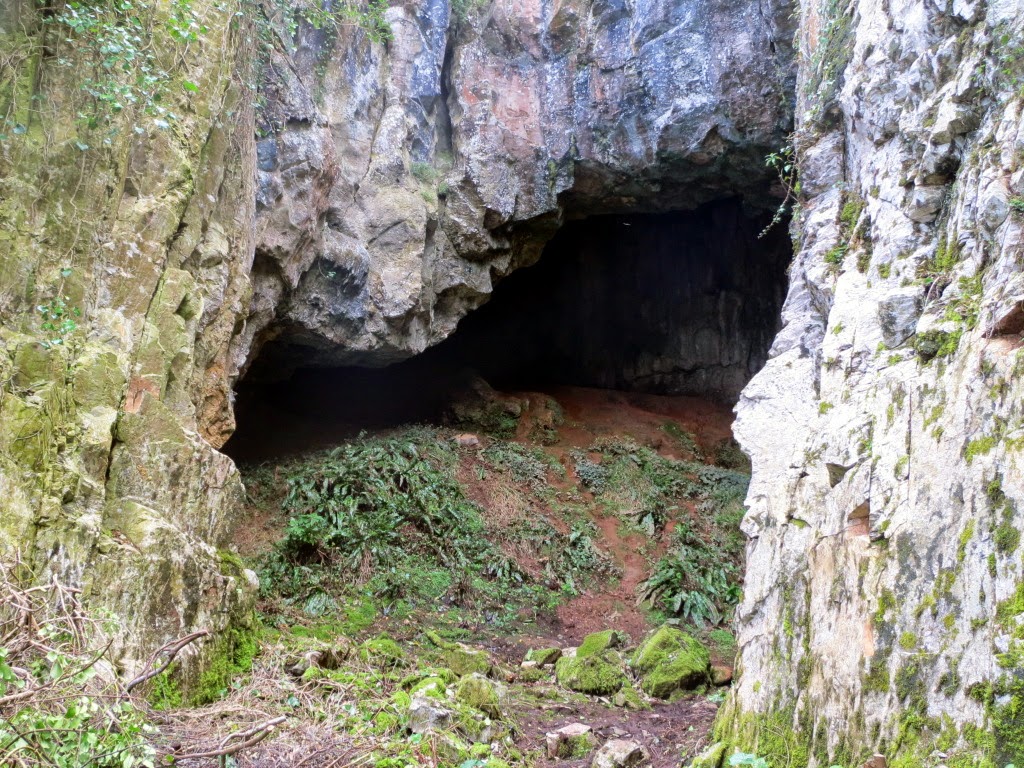 This is Ash Hole Cavern (aka Ash Hole, Ashole Cavern, and Berry Head Cavern). This opening isn't naturally-formed, but a breach into the chamber created in 19th century quarrying. There's not a great deal to see unaided: a small opening upward to the eastern end (perhaps the original sinkhole), and a muddy slope downward to the west. However, it's of interest as one of a couple of Brixham caves that in the 19th century yielded significant animal and human remains (there's a brief summary here at the page Brixham's Caves). 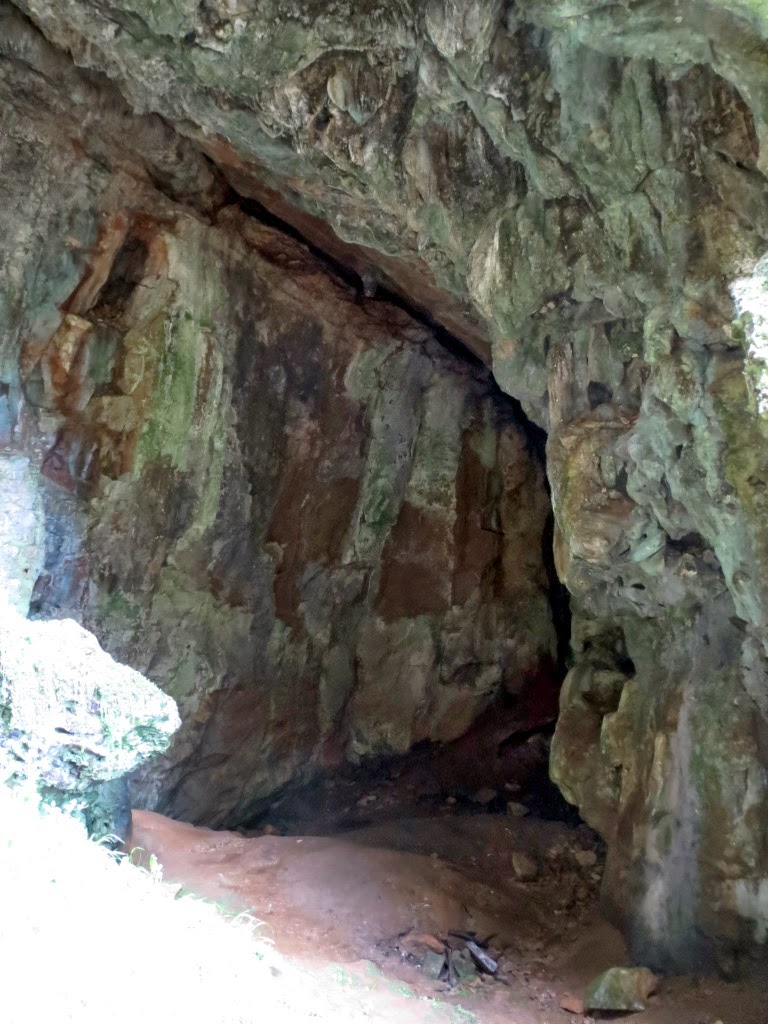 There are a number of 19th century accounts of Ash Hole Cavern: for instance, there's the large section about the "Ash-Hole" (pp 146 onward) in Octavian Blewitt's 1832 The panorama of Torquay: a descriptive and historical sketch of the district comprised between the Dart and Teign (Internet Archive ID panoramaoftorqua00blew). Blewitt quotes a letter from Thomas Northmore, first investigator of Kent's Cavern, concerning the latter's visit in 1824 (see page 120) - but Northmore doesn't seem to have been terribly rigorous. His field methods may have been OK, but he saw everything in terms of his pet theories about the biblical Flood and of caves used to celebrate "Mithratic or Dionysaick Mysteries".  Many accounts note an exploration of the cavern around the same time by a Reverend FB Lyte, but he doesn't seem to have published anything. Another vicar, Reverend J MacEnery, made notes on it, but when his Cavern Researches (J MacEnery, ed. E Vivian, 1859, Internet Archive cavernresearche00macegoog) came into print, the preface mentions that the manuscript was in such a state that "The notes upon Berry Head Cavern, referred to in the title page, are entirely lost".

In all, early exploration of Ash Hole Cavern seems to have involved unsystematic digging, unsytematic recording of finds, and a lot of unscientific speculation about origins. The whole saga exemplifies the faults of the 'antiquarian' approach, as mentioned previously in the previous post about the book Prehistoric Wessex: Towards a Deep Map. The first solid scientific review appears to be The Ash Hole and Bench Bone-Caverns, at Brixham, South Devon (page 73, W Pengelly, FRS FGS, Report and Transactions of the Devonshire Association for the Advancement of Science, Literature and Art, Volume 4, 1871) - but by then, the cave's content had been so disrupted that there wouldn't have been much left for serious investigation of its stratigraphy.

The site is scheduled under the Ancient Monuments and Archaeological Areas Act 1979 (ID 1019133).

But very little later, we see an investigation nearby with the techniques of modern archaeology. While the early investigations of Ash Hole Cavern sound rather messy - antiquarian dabbling - the same can't be said of Brixham Bone Cavern (aka Brixham Cavern, Windmill Hill Cavern, and Philp's Cave). This now somewhat forgotten cave - or set of limestone fissures - is close to Brixham Harbour, and came to light in 1858 in the period when Brixham was expanding uphill, and a Mr John Lone Philp discovered the fissure in the process of excavations for a row of buildings. The location's very clear, marked as "Bone Cavern" on the 1865-1874 town plans, and the buildings called "Grotto Terrace".
The cool thing is that the street map actually gives a schematic outline of the cave, as shown in the following paper: 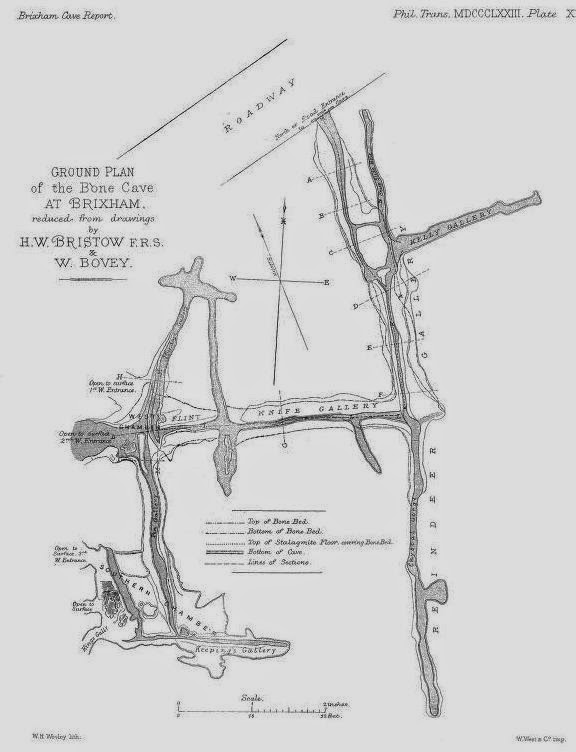 In this case, the cave was a godsend to geology. It was discovered sealed by stalactites, and thus not disturbed by antiquarian blundering. The Geological Society of London set up a committee to investigate the cave, leased it from Mr Philp, and conducted a through scientific investigation, which was published as the paper Report on the Exploration of Brixham Cave, Conducted by a Committee of the Geological Society, and under the Superintendence of Wm. Pengelly, Esq., F.R.S., Aided by a Local Committee; With Descriptions of the Animal Remains by George Busk, Esq., F.R.S., and of the Flint Implements by John Evans, Esq., F.R.S. Joseph Prestwich, F.R.S., F.G.S., &c., Reporter  (Proceedings of the Royal Society of London; Philosophical Transactions of the Royal Society, Royal Society of London, 1873, Internet Archive ID philtrans03896081). The results - see William Pengelly Cave Studies Trust - were groundbreaking in the evidence they brought to the then disputed antiquity of humanity, by showing rigorously that human remains existed in the same deposits as extinct animal species. It was a significant investigation more than just for what was found, but for its research methods, which provided spatial data still usable today:


The oldest known spatially-explicit archaeological excavation, conducted in Brixham cave, Devon, in 1858, is reconstructed using geographic information systems technology. Two dimensional plots of individual fossil taxa and flint artefacts demonstrate the utility of the technique for elucidating taphonomy and palaeobiology. The cave served as a den for hibernating brown bears, as a den for hyena and cave lion, and as a reliquary for their prey.
- McFarlane, D. A, Lundberg, J., and Roberts, W. 2010. "A geographic information systems approach to the 19th Century excavation of Brixham Cavern, Devon, England." Studies in Speleology 17:1-11.

See Philp's Cave at Showcaves.com for a brief summary of the cave's story. It was open as a show cave within living memory but closed in 1977; postcards of the cave interior occasionally crop up on eBay (such as this one recorded at the National Archives, COPY 1/493/480, "Photograph of the interior of the Reindeer Gallery to be seen at Philp's Stalactite and Bone Cavern, Brixham, taken on January 5th 1906". The Cavern is commemorated, however, by the location names "Cavern Road", "Cavern Mews" and "Cavern Steps"; and, from a look at Google Maps Street View, The quaint little archway leading under a house on Mount Pleasant Road is its entrance.

A third Brixham bone cavern - the Bench Cavern (aka Bench Bone Cavern) mentioned in Pengelly's account - The Ash Hole and Bench Bone-Caverns (page 78 ff) - no longer exists. It was uncovered by quarrying in Bench Quarry, Freshwater (not the IoW one). I haven't found the precise location ...


the northern slope of Furzeham Hill, one known as Bench Quarry, about half a mile due north of Windmill Hill Cavern, and almost overhanging Torbay
-Pengelly, ibid.

... but later accounts say that it was destroyed by further quarrying.

Addendum,  29th July 2014
A further bit of Brixham subterranea: on the Brixham Museum website, I just ran into the paper THE BERRY HEAD CAFÉ TUNNELS REVISITED: PREHISTORIC SOUTERRAINS OR GEORGIAN SEWAGE SYSTEM? by Philip L. Armitage and Alan Masterson (originally published in Council for British Archaeology South-West Journal No. 23 – June, 2009: 15 – 21). It's an interesting story with, reading between the lines, a deal of archaeological politics. The original investigator in the 1970s, John Durston,, wanted to keep some tunnels on Berry Head secret, believing them to be Iron Age; but ructions ensued when the story got into the newspapers. Reinvestigation (without access to original records "owing to all contact with Durston having ceased") revealing the more likely explanation that the tunnels are just Georgian sewers.