Things that go bump in the night

From Ghoolies and Ghoosties,
long-leggety Beasties, and Things
that go Bump in the Night,
Good Lord, deliver us.

Following up a query I saw elsewhere, I've been wondering about the origin of this piece of doggerel, which gets variously credited as Scottish, Irish, or West Country. It goes off in interesting directions...

The ultimate origin is very clear: that's it's a parody of the Great Litany from the Book of Common Prayer. For instance:


From all evil and mischief;
from sin, from the crafts and assaults of the devil;
from thy wrath, and from everlasting damnation,
good Lord, deliver us.

But the interest is in how it got to its present form. There are no print citations findable for "go bump in the night" prior to the start of the 20th century; a look at the wonderful Google Books Ngram Viewer immediately suggests it's not that traditional. 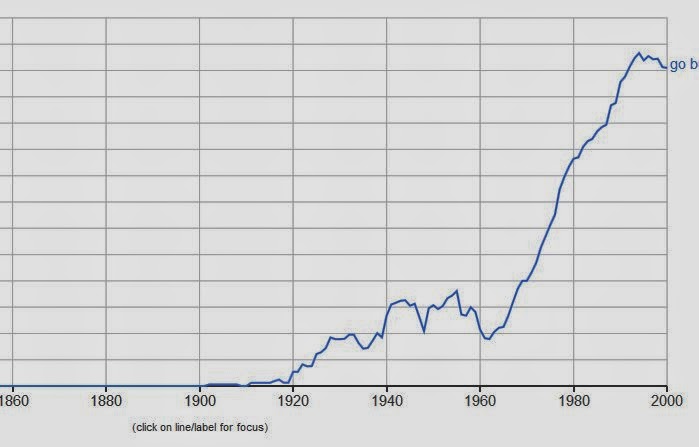 A closer look at Google Books occurrences finds a cluster of early citations from about 1910. Notable ones include:


Probably all of you know the Scotch child's prayer, which goes something like this: "From all witches, warlocks and wurricoos, from all ghosties and things that go 'bump' in the night, Gude Laird deleever us!"
- Transactions, Volumes 5-13, National Safety Council, 1916

I'll slightly discount that as a data point, because the phraseology of this "Scotch child's prayer" appears to derive solely from Arthur Stringer's 1915 novel The Prairie Wife: (Gutenberg E-text 18875):


And Babe whimpered a little in his cradle and brought us all suddenly back from the Wendigo Age to the time of the kerosene lamp. "Fra' witches and warlocks," I solemnly intoned, "fra' wurricoos and evil speerits, and fra' a' ferly things that wheep and gang bump in the nicht, Guid Lord deliver us!"

So, counting down further:


The text of his [Oliver Onions'] book, Widdershins (Martin Secker), is the quaint petition for deliverance "From Ghaisties, Ghoulies, and long-leggity Beasties and Things that go Bump in the Night".
- page 108, Punch, Volume 140, 1911

A collection of fairy poems is obliged to appeal to old and young alike. Mr. [Alfred] Noyes evidently had no age limit in mind when he did his work, but certainly he was an appreciator of child-nature when he decided upon this "Quaint Old Litany" for his motto:
“From Ghoulies and Ghoosties, longleggety Beasties, and Things that go Bump in the Night, Good Lord, deliver us!"
- The Literary Digest, Volume 39, 1909

This appears to be the key clue. This "Quaint Old Litany" in its modern form originates, as far as I can tell, in Alfred Noyes' 1908 The Magic Casement; an Anthology of Fairy Poetry (Internet Archive magiccasementant00noyeiala). I can find no earlier citations; it looks like the standard literary device of claiming antiquity to add weight to a quotation. 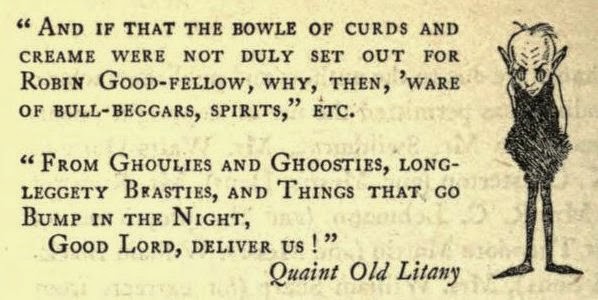 However, once you extend the search to similar texts, you start finding precursors:


A Scotch Farmer's Prayer
The following prayer is said to have been uttered by a worthy farmer in the West of Scotland during the time of the threatened French invasion in 1804:—

"God bless this house and all that's in this house, and all within twa miles ilka side this house. O, bless the cow, and the meal, and the kailyard, and the muckle toun o' Dumbarton.
Bless the Scots Greys that are in Hamilton Barracks. They are brave chiels— they are not like the English whalps, that dash their foot against a stone, and damn the saul of the stone —as if a stone had a saul to be saved. O, build a strong dyke between us and the muckle French, but a far stronger ane between us and the wild Irish.
"O Lord ! preserve us frae a' witches and warlocks, and a' lang-nebbet beasties that gang through the heather. O Lord! put a pair o' branks about the King of France's neck; gie me the helter in my ain hand, that I may lead him about when I like. For Thy Name's sake, Amen."
-  The Queenslander [newspaper], Brisbane, Saturday 19 January 1901

That one was in Jacob Larwood's 1871 The Book of Clerical Anecdotes: page 184, and appears to have first seen the light of day in The Gentleman's Magazine in 1867 as A Scotch "grace" during the French War. And:


He was very fond of a travesty on the Litany, which ran in this manner — " From witches and wizards, and long-tailed buzzards, and creeping things that go in hedge-bottoms, good Lord deliver us."
- A son of Belial; autobiographical sketches by Nitram Tradleg, Edmund Martin Geldart, 1882

A venerable friend tells me that he remembers to have heard grace before meat in Scotland in these words: " Frae witches an' warlocks an' a' lang- nebbed creatures, guid Lord deliver us!"
- page 12, The English Lakes and their Genii, Moncure D Conway, Harper's New Monthly Magazine, December 1880

The canny Scotch folks, on first settling down in the wilderness, were greatly terrified at these noises, and used to pray fervently to be delivered from "witches and warlocks, and the things that cried 'Boo' in the meadows."
- Frank Leslie's Pleasant Hours, Volume 13, 1873

In Scotland it [the curlew] is called Whaup, which is a name for a goblin which is supposed to have a long beak and go about the houses after nightfall; hence we can understand the Highlander's prayer to be saved from witches and warlocks and "a' long-nebbed things."
- Johnson's Natural History, Samuel Griswold Goodrich, pub. AJ Johnson, 1872

"Long-nebbed" is "long-nosed", by the way. This looked to be the end of the trail, in Scottish folklore, but From Ulster to America: The Scotch-Irish Heritage of American English (Michael Montgomery, 2006) gave a lead that jumps it back a century to James Row's 1733 tract headed by The Humble Remonstrance of the Five-foot-highians: Against the Antichristian Practice of Using a Standard in Enlisting of Soldiers (see Google Books ID MZpbAAAAQAAJ - I can't honestly tell whether it's barking mad, or politico-religious satire whose context I don't get). The blessing  ...

... appears in the section A North-Country Grace (pages 29-31). It's a marvellously vigorous rant worth reading in full; there are elements recognisable in the alleged 'Scotch Farmer's Prayer' quoted above. Further back still, David Fergusson's 1641 Scottish Proverbs has a similar warning ...


God keip us from gyrcarlings & all long nebbed things
- Fergusson's Scottish proverbs from the original print of 1641, JD Westwood, 1924