I'm still occasionally rather slow about realising the possibilities of the Internet; the Internet Archive often makes it possible to retrieve online material lost through site updates and domain changes. So I was delighted to recover this local history article I wrote, which I've now updated to reflect changes in Topsham over the past eight years or so.

Topsham, Devon, is an atmospheric little town on the Exe Estuary, now a suburb of Exeter, that used to be a major port. Many aspects of its features and history are well-known but for a time I've been intending to compile some of the more obscure facts, mostly omitted from official guides, that I've encountered since living here. They may be of interest to visitors, and can be viewed in a circular walk that takes about an hour. 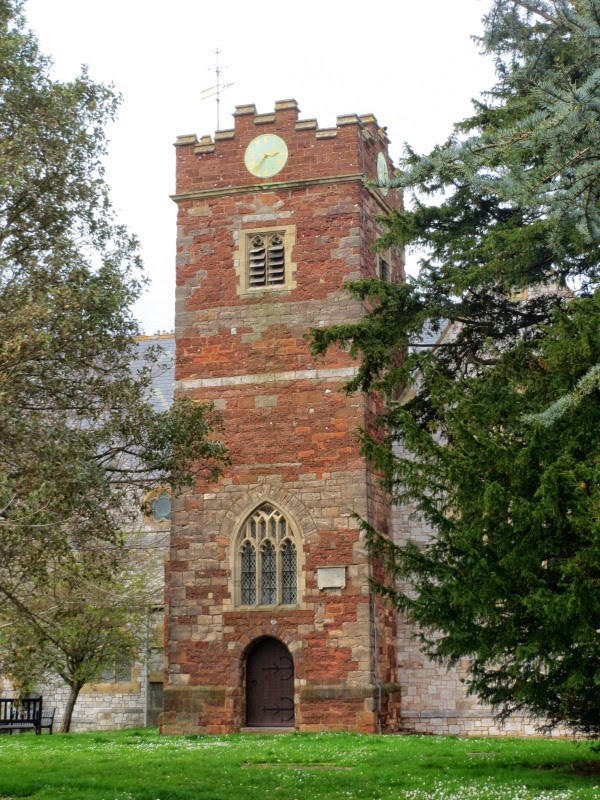 St Margaret's Church, near the town centre, is a convenient landmark to start your walk. It comprises features differing architectural styles. While it's well-known that the main church was rebuilt in grey limestone following its destruction by fire in the 19th century, it's a curious fact that the top of the tower (the portion above seam marked by the white stone band) is older than the bottom. In the English Civil War, the tower base was completely destroyed by cannon fire from Royalist forces acting on a rumour that Cromwell was hiding there. This left the belfry inaccessible - the situation called flying freehold - until a new lower section was built up to meet it in the early 1700s. If you visit the church, please contribute to the Topsham Society's fund to finance staining the main church with locally mined red ochre to match the tower. 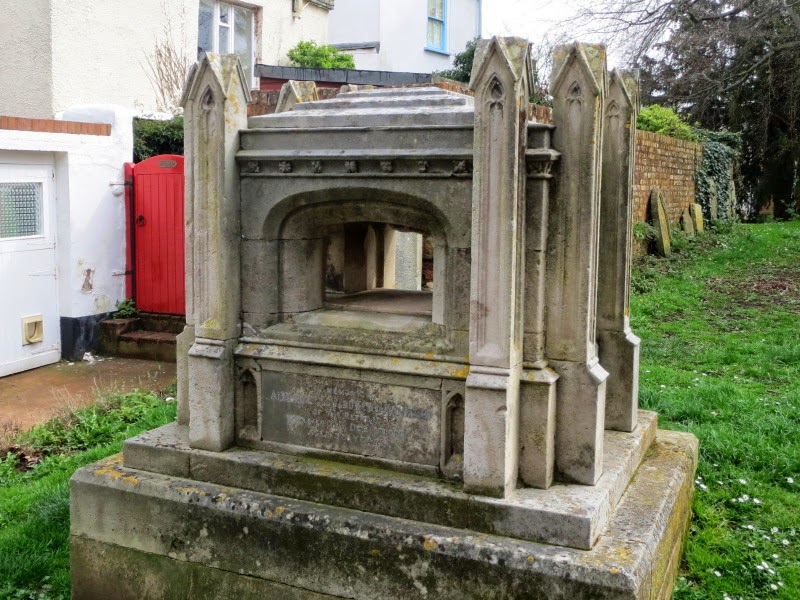 The churchyard of St Margaret's has an intriguing feature, the Hamilton Tomb. This is the tomb of Alexander Edward ('Ned') Kelso Hamilton, the young archaeologist on whom Bram Stoker based the hero of his story, The Jewel of the Seven Stars. Stoker's title was inspired by the Seven Stars Cider House which can be seen in the small close at the other side of the churchyard (the same location was used in the filming of Cider House Rules). Hamilton found great significance in the fact that his own initials (A.N.K.H.) spelled the Ancient Egyptian word for "life", and left instructions that he be mummified before burial. His tomb is claimed to be the subject of a Pharaonic curse: in 1972, a visitor who vandalised it was admitted to the Exeter RD&E with what appeared to be jackal bites on his throat; and it was said that if you placed your hand under the central spike, it would drop and crush it if you told a lie. The spike has since been removed on Health & Safety grounds. 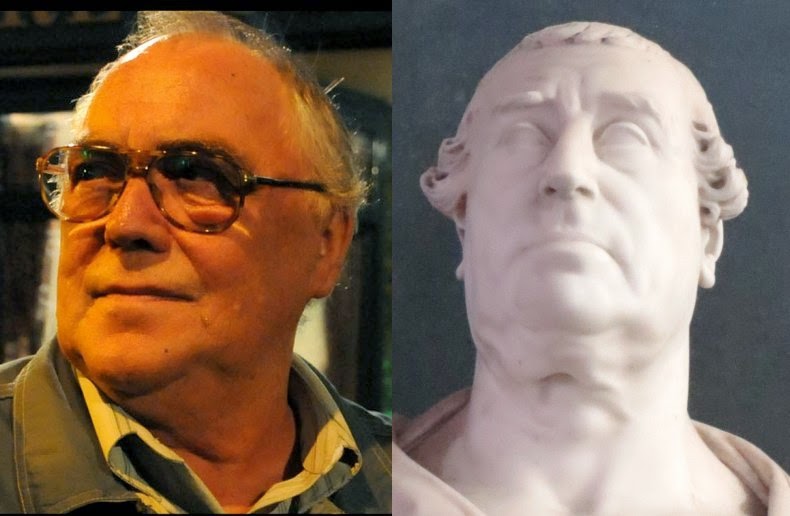 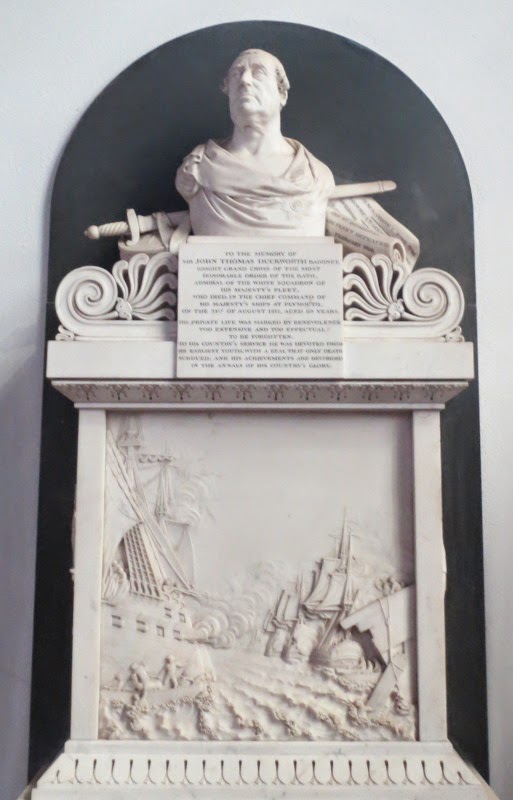 Inside the church itself are the Duckworth Memorial and Tombs. The memorial carvings mark the tombs of the Duckworth family. Sir John ("Jack") Duckworth died while serving on the HMS Florizel. The late actor William Tarmey (above left) was a direct descendant of Sir John (above right), and his character name in Coronation Street was inspired by that of his distinguished naval ancestor. You can also see the banner of Colonel Robert Hall's Devonshire & Cornwall Sensible Regiment.

Leaving the church, take the steps from the churchyard down to the river and turn left to follow the Underway to the Quay. Since I first wrote the article, the heaps of garget shells left over from the defunct fishing industry have been cleared away as a nuisance, but you can still see a prominent landmark, the King's Beam. This cast iron structure on the Quay is one of the more sinister relics of Topsham's maritime heritage. It was used well into the 19th century for the summary punishment of sailors. Those who had absconded from their ships or "engendered an affray" in the local brothels were suspended here to be flogged, and the beam was also used to hang those condemned to death for more serious offences. In the late 19th to early 20th century, a stylised depiction of the beam was used as a religious symbol by the Topsamite Reformed Brethren, a non-conformist sect who preached that Joseph of Arimathea had visited Topsham with the young Jesus. The sect is still technically banned by an emergency law passed in 1915 when its leader spoke out in favour of the Kaiser, but it still exists and members can be identified by their secret pronunciation of the town's name as "Topsam". It's of related interest that Oscar Wilde stayed incognito at the quay, "posing as a Topsamite", before sailing to exile in France. 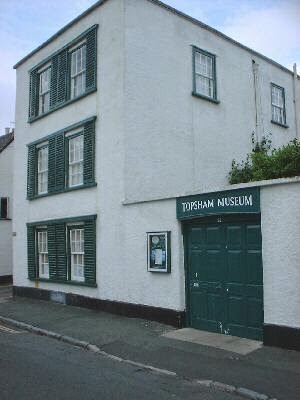 Proceeding downriver along the Strand, which has notable Dutch-style architecture, you'll find Topsham Museum. A central feature is the restored apartments of the sumptuous Topsham mansion of the Dutch merchant millionairess Avis van Rental, where she lived with the actress Vivien Leigh ("tiny tiny hands, mind like a sewer, and absolutely lully"). A number of the older exhibits are now in store (the full-rigged Spanish galleon captured from the Armada, and the a quarter-scale model of the town as it was in 1850). The cafe, for some years an amusing recreation of a 19th century sailors' brothel, has been renovated to reflect the current Antarctic theme commemorating the Topsham-built HMS Terror. The tasty pemmican pasties and Ice Bird Surprise are recommended: but wrap up warmly, as the air conditioning is set to a bracing -5 degrees: not entirely authentic, but sufficient to give the flavour of life for those who sailed on the Terror. 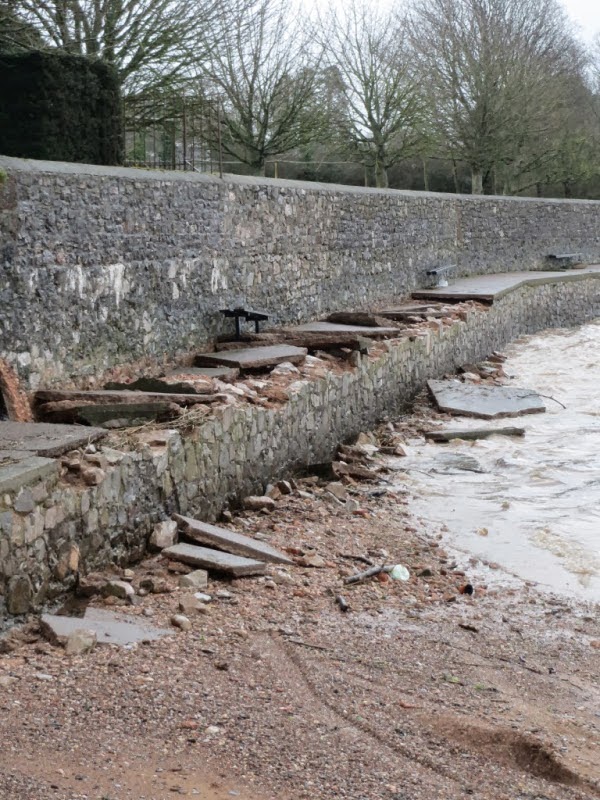 Proceed to the end of the Strand, and you will come to the Goat Walk.This narrow path along the sea wall is so named because a 19th century Exeter dignitary used to lead his goat out here to commit unnatural acts with it out of sight of the town. One snowy night in the 1850s, suspicious locals followed the tracks and caught him, whereupon the goat, frightened by the shouting and torches, ran across the frozen Exe, covering miles across the Devon countryside before being shot near Totnes by Charles Babbage, the computer pioneer. This gave rise to the local story of the 'Devil's Hoofprints', which appears to have been invented to provide a more acceptable explanation of the prints. The regular off-road car racing on the shore has been suspended to permit pedestrian access while the damage to the Goat Walk, the toll of years of use by overweight strollers and dog-walkers, is repaired.

At the end of the Goat Walk, turn left, and this will take you on a pleasant country walk along Bowling Green Road back toward Topsham railway station. The attractive fields of genetically modified sukebind are no longer a feature following local protests, but you can take a brief detout along the new Route 2 cycle track extension over the marshes at the meandering lower reaches of the River Clyster. In the evening, it's advisable to take a torch, as the track has a high wall on one side to prevent access to the railway, a high wall on the other to prevent disturbance to grazing marsh birds, and an opaque roof to prevent walkers and cyclists from frightening any birds flying over. 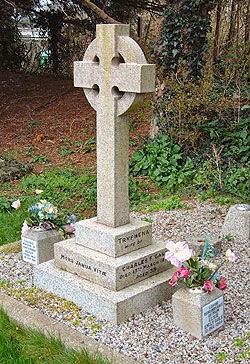 At the railway station, continue straight across the mini-roundabout, where the road will lead you to Topsham Cemetery, which is notable as the burial place of Tryphena Sharks, Thomas Hardy's cousin. The grave is easy to find as it lies at the foot of a decommissioned nuclear missile silo. Public access is still forbidden to the silo, a relic of the Cold War, which was built for the protection of Plymouth and the western reaches of the English Channel.

Almost opposite the cemetery you'll see a railway arch. Go under this along Denver Road, which will take you to the Exeter end of Topsham. Unfortunately there is little sign of the once-famous Topsham Gum Mural on the wall opposite. This unusual piece of art, called Spirit of Youth and commissioned for the Topsham 2000 Heritage Year celebrations, consisted of hundreds of carefully placed blobs of chewing gum, installed as a performance art piece by Exeter sculptor Trago Mills. Mills says of it: "The gum is a metaphor for our recycling of cultural influences. We take in the indigestible ephemeral images of the mass media, extract what we can from them, then return them in a changed form to the field of discourse." Already sadly dilapidated in 2005, the work was doomed by failure to gain Lottery funding for its upkeep. 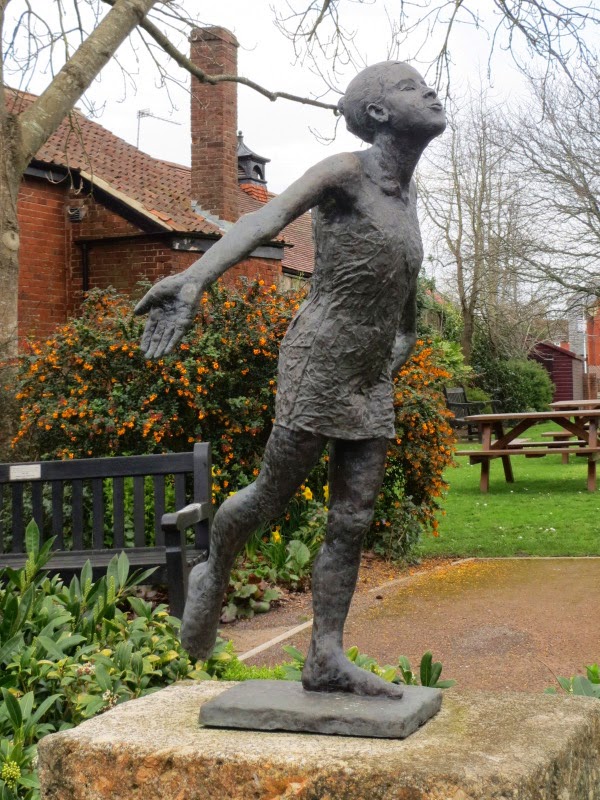 Now walk back into town. After you pass the mini-roundabout, you'll see on the left a small public garden with an interesting statue, The Spitting Ballerina. This statue commemorates the visit of the young Anna Pavlova to Burnthouse Lane, establishing it as Exeter's central venue for cultural and artistic events. Her famous Dying Swan performance was inspired by seeing a swan expiring at Topsham Quay. Pavlova, due to a strict dietary regimen during training, had a lifelong nervous habit of salivating copiously at the sound of the dinner bell (hence the term "Pavlovian reflex" and the meringue dish Pavlova, which is supposed to elicit the same effect). Her problem extended to any bell, such as those in the orchestra and interval bells in the theatre. Following disastrous early reviews (Max Beerbohn wrote, "One who dribbles so well would better have pursued a career as footballer") she dealt with excess by developing the skill of precise and unobtrusive spitting during performances; the clang of the spittoon can be heard distinctly in early sound footage of her work.

Just beyond the statue, you'll see Matthews Hall, the centre of Topsham's community life, and named in honour not (as is commonly stated) of the footballer Sir Stanley Matthews, but of "Ma Thews", the celebrated 19th century lady wrestler immortalised in Jean Veber's 1898 painting Women Wrestling in Devonshire. In a tradition commemorating the rebel Duke of Monmouth's speech to the people of Topsham in 1685, on Saturdays anyone may proclaim themselves monarch and address the public (either from the street or, for a small fee, from the balcony). The Union flag is normally flown above Matthews Hall, but during the Town Fair held every summer, it is replaced by the Topsham flag, whose heraldic description is "a serpent with its head thrust in its own fundament". 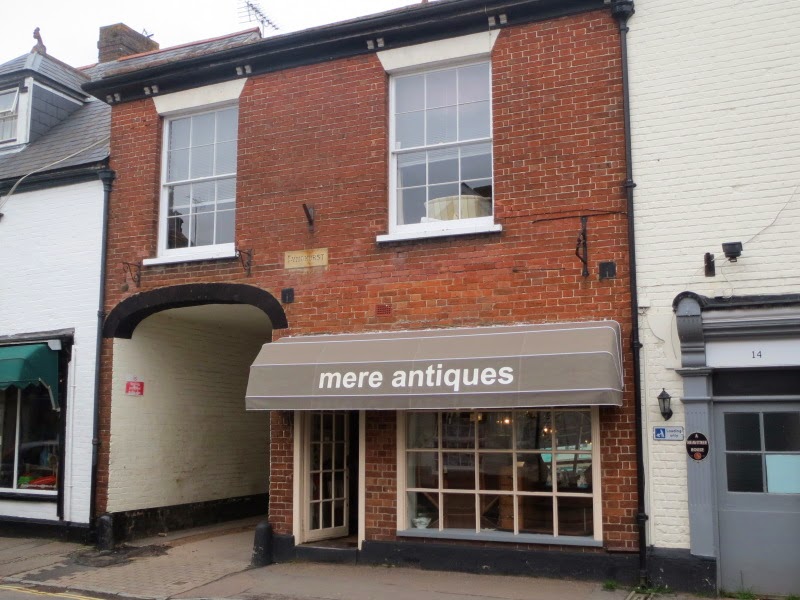 Continuing back toward the town centre, you'll see 13 Fore Street on the left. Now occupied by Mere Antiques, this was the home in her later life of Tryphena Sharks, the subject of Thomas Hardy's poem cycle The Day of the Tryphenas. After meeting him while climbing Tryfan in Snowdonia, Tryphena married George Gale, the publican of the adjacent London and South Western Hotel (later Drakes, and now pending conversion to an extension of the Co-Op). Despite an attempt at trephination treatment, she died young from a debilitating disease that medical historians have identified as tripanosomiasis aggravated by a tryptophan deficiency. She was survived by one daughter, Tripitaka. (Note: sufferers from triskaidekaphobia should on no account approach the building).

This brings you back to the centre of Topsham, completing the tour. If you find Topsham's more unusual features were to your taste, you'll enjoy reading about another of Devon's lesser-known attractions, the Dunchideock Treacle Mines. Topsham's official town page can be found at www.topsham.org.uk.