"While I live I'll crow"

I just checked out the reference to the architect John Foulston "emulating the renowned Romeo Coates in the singularity of the vehicle which served him as a gig" in George Wightwick's 1857 Bentley's Miscellany piece "Life of an architect" (see Imaginary prison and an elephant portfolio). The person in question was the famously eccentric dandy and actor Robert Coates (1772-1848).

Robert Coates was the son of a wealthy sugar planter in Antigua. He took an interest in theatre, and on gaining his inheritance, came to England and used his inheritance to fund a career of hilariously incompetent unpaid acting, billed as "the Celebrated Philanthropic Amateur". He acquired the nickname "Romeo Coates" after one of his favourite roles. It's hard to tell if he was one of am-dram's many sufferers from the Dunning-Kruger Effect, or if it was inspired trolling, but he gave people plenty of drama and amusement. He enjoyed his bling ...


... his collection of splendid brilliants, consisting of shoe and knee-buckles, brooches and rings, and sword-handle embossed with the same precious stones.
- p234, Charles Mathews, Memoires, Volume 2, 1839

... and seems to have got a great deal of fun out of his notoriety, before the money ran out. In later life he settled down, marrying in 1822 and living quietly in London until his death at 75 after what we'd now call a hit-and-run incident involving a hansom cab.

Wightwick's comment concerns the renowned flashiness of Coates's curricle; in the early 19th century, one's carriage was just as much a statement of fashion and wealth as choice of car is now:


As a rich bachelor, somewhat anxious for notoriety, as well as fond of display and dress, Mr. Coates about this period introduced to the gaze of the astonished Londoners his well-known curricle, which earned for him another sobriquet, that of "curricle" Coates. Whence the original idea emanated of this extraordinary vehicle it is difficult to say. Its style was so unique that Mr. Coates has been always looked upon as its originator. We think that he must have taken the idea from the celebrated Beau Fielding, a fashionable star of a century before, and of whom the Tatler tells that he rode in a Tumbril of less than ordinary size, to show off the fine proportion of his limbs and the grandeur of his person to the best advantage. Others compared the vehicle the beau rode in to a sea-shell, accompanying which were a dozen tall fellows dressed in black and yellow. The last feature Mr. Coates did not imitate; but his curricle is described by those who frequently saw it as one of the neatest vehicles ever turned out of Long Acre. Its shape was that of a scallop shell; the outside was painted a beautiful rich lake colour, and bore its owner's heraldic device — a cock, life-size, with outspread wings, and over this the motto, "While I live I'll crow." The step to enter the vehicle was also in the form of a cock. The interior was richly lined and upholstered, and the whole mounted upon light springs with a pair of high wheels picked out in well-chosen colours. The vehicle was drawn by two white horses of faultless figure and action, and which must have been matched and acquired at great cost. Their trappings were of the latest fashion and ornamented with the crowing cock in silver. The horses were driven in pair, and the splinter bar was surmounted by a carved brass row; on top of this stood a plated cock, crowing. An equipage such as this, driven by a person dressed in the height of fashion, could not fail to attract public attention, whether in The Row, Pall Mall, or Bond Street; it was admired as much for its unique appearance as for the well-groomed and trained horses attached to it. The effect desired, no doubt, was highly gratifying to its owner, who by this means became well known to the London populace long before he presented himself before them on the stage. Mr. Coates did not confine his drives to the immediate vicinities of St. James's and St. George's, but frequently drove into the city, where the curricle was often seen standing outside the Bank of England, whilst its owner was transacting business within. By this means he became more widely known than ever.
- The Life of Robert Coates, John R and Hunter H Robinson, 1891

To be fair, Coates was far from alone in this eccentricity:


The carriage was far more showy and complicated in those days, exhibiting less of good taste, and an inferiority in workmanship. Carriages were often fanciful in form, in consonance with the caprice of the owners, guided by no rule but eccentricity of appearance. Everybody who remembers the equipage of Romeo Coates, at a later time, can readily understand how carriage-building might be varied without the representations of chanticleer in bright metal, which covered his vehicle and harness, at which the boys in the street used to crow like cocks.
- By-gone Manners and Customs, The Eclectic Magazine of Foreign Literature, Science, and Art, 1862 ( page 527).

There's more about the fashionable curricle in Samuel Sidney's 1880 The Book of the Horse (page 538-).

Returning to Coates, Volume 5 of Kirby's Wonderful and Eccentric Museum: Or, Magazine of Remarkable Characters (RS Kirby, 1820, Internet Archive kirbyswonderful04unkngoog) - which is a very good contemporary account of Coates and his act - has more on his equipage:


By some fatal accident, however, he broke this curricle that caused so much mirth and curiosity, and now sports another, made almost in as whimsical a manner: the body is copper, and painted so as to appear like a huge kettledrum hung upon two large serpents; the harness, as before, are studded with cocks, &c. but the large saddles are abandoned. He drives about town with two servants on horseback, and is very particular in having long-tail'd horses, and causing the servants at all times to keep a most respectful distance. Should any person turn to look after him, particularly the ladies, he will turn immediately, and not leave looking at them until they retire. It was our intention to have presented our readers with a view of the first curricle Mr. Coates sported, but we could not get a correct sketch, although Mr. Gillray has caricatured him in it; and a Mrs. Aberdeen advertised she had made one of paper, and exhibited it in her Papyrueism, stating she had been offered fifty guineas for the model. This advertisement appeared in the Morning Post, May 1, 1813, in the following words :

"Mr. Coates seems destined to live all the days of his life, or, in other words, to enjoy perpetual notoriety: he exhibits himself on the stage, and the theatre is crammed from the front row of the stage-boxes to the back seat of the one-shilling gallery. Mrs. Aberdeen exhibits his curricle in her Papyrueism, and her rooms are crowded almost to suffocation, with the world of taste and fashion. We understand that Mrs. Aberdeen has refused an offer of fifty guineas, which was made her for this elegant little model of Mr. Coates's fancy, alleging that she could not think of lobbing her exhibition of one of its greatest attractions."
- "Some interesting particulars of Robert Coates, Esq., commonly called the Amateur of Fashion", pages 2-20, Kirby's Wonderful and Eccentric Museum

Like many other fashionable and larger-than-life figures, Coates was caricatured variously in his lifetime. For instance, the anonymous aquatint An Amateur's Dream (see the British Museum site, Museum Number 1868,0909.12652) shows Coates asleep, holding his trademark cock. He also appears in William Elmes's 1813 The GAY LOTHARIO. the Great and Celebrated Amatuer [sic] of Fashion: ... 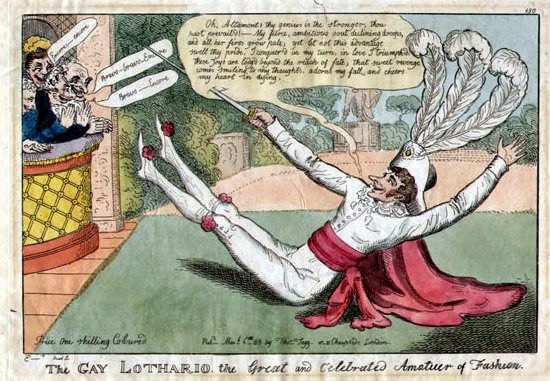 ... as well as William Holland's 1811 The Game Chicken:, caricaturing his celebrated curricle: 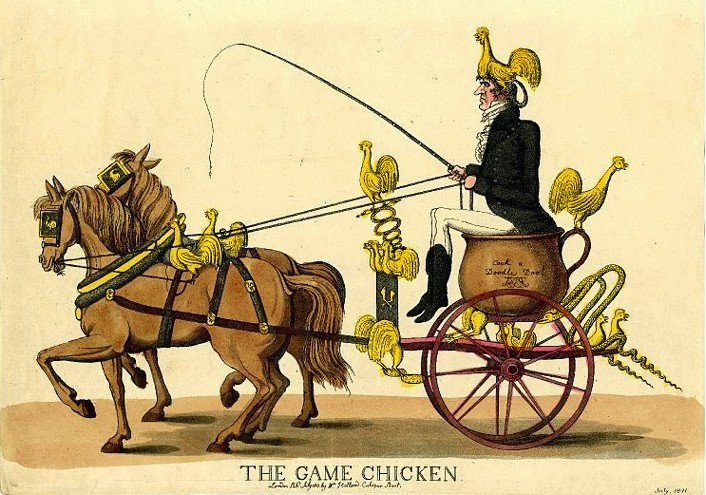 William Heath's 1811 Grimaldi's Tandem is another caricature, and there's a smaller, more realistic, impression of the curricle in the 1813 May fashions, or hints for a four in hand exhibition (British Museum, Museum Number 1868,0808.8061). I can't find any reference to a Gillray print of Coates's curricle mentioned in The Life of Robert Coates; maybe the writer was mistaking The Game Chicken for a Gillray?

Coates was also satirised in verse. Remorse: The Dream of an Amateur of Fashion ("from the British Press, July 23"), published in The Spirit of the Public Journals, 1814, pages 171-174, is quite fun; it imagines him riding in Hyde Park, and having a terrifying encounter with the three witches from Macbeth, who scare him off acting. A shorter example:


And see where ev'ry body notes
The star of fashion, Romeo Coates
The amateur appears:
But where! ah! where, say, shall I tell
Are the brass cocks and cockle shell?
I'll hazard, rouge et noir
If it but speak, can tales relate
Of many an equipage's fate,
And may of many more.
- The English Spy, Charles Molloy Westmacott, 1825