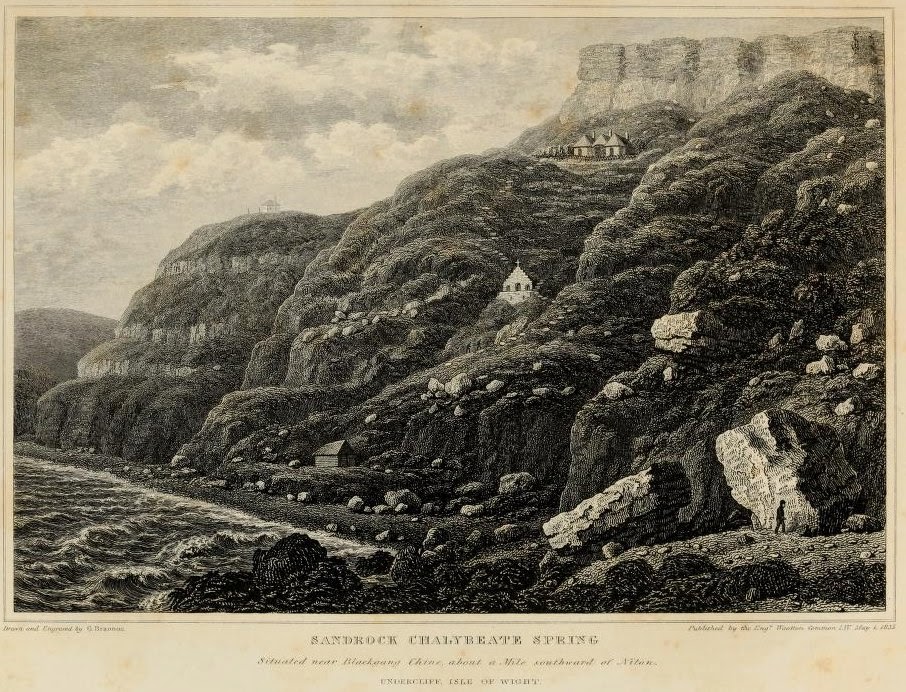 
THE OLD CHALYBEATE SPRING AT SANDROCK, I.W.
SOME OLD-TIME POEMS IN PRAISE OF ITS DISCOVERY

Dr. E. Allan Waterworth, of Newport, writes.
The extremely interesting account of my grandfather's discovery of the chalybeate spring at Blackgang which appeared in the County Press a short time since reminded him of two gems of poetry addressed to him by grateful patients which I think may perhaps amuse some of your readers. I am afraid that, notwithstanding the medicinal virtues of this chalybeate water, the consumption of it did not tend to promote literary of poetical talent:

SONNET
Addressed to Mr. Waterworth on his discovery of a chalybeate spring, by a lady who has derived benefit from its use.

If they, who first beneath the heaving mould,
Min'd where embowell'd gems and metals glow,
And thence spreade dubious good, or specious woe,
In grateful record, lofty stations hold:
What rank will fame on Waterworth bestow?
Who, in a source of purer good than gold,
The healing powers first ascertained and told,
And bade the fountain health dispensing flow.
The rescued nymph ensures no humble place,
By him invoked, life's ebbing tide she swells,
Restores the genuine rose to beauty's face,
Dejection's nerve-thron'd stubborn spirit quells,
Incites the stagnant fluids in their cells,
And heals and animates a languide race.
- Isle of Wight, April 30th, 1809

FIES NOBILIUM TU QUOQUE FONTIUM
What, tho' the muse, fatigued with trilling long,
In fancy's fields, and of the poet's meed
Regardless, as despairing, hushed the song,
Which erst all freely flowed, and flowing freed
Her soul of care, though dropt her sylvan reed
Beneath the poppies of the bower of ease,
And bound her temples with the' oblivion's weed;
Aroused, she starts, prepared her pipe to seize,
And join the choral strain, which fame to worth decrees.
But all in vain she starts, in aid to swell
A choral strain, with the accordant lays.
No minstrel hand attunes the vocal shell,
No minstrel voice resounds the note of praise;
Yet, be it here, all unrelieved to raise
A symphony, which floating on the wind,
May, as its cadence on the ear decays,
Melt in the melody of lyres combined;
Its theme the glorious cause which benefits mankind.
Tho' far her talent falls before the theme,
She quits he Aonian and Castilian rill
To seek and quaff a more inspiring stream
Than ever gushed from worshipped fount, to fill
The winding currents of Apollo's hill;
She quaffs the lymph, which from the rock-roofed mine
Wells slowly, brew'd by Nature's chemic skill,
To form libations for Hygeia's shrine,
When science bid the fount in daylight radiance shine.
She quaffs the lymph, she feels her powers expand
With growing health, and lifts her simple strain
To laud the blest research, the patient hand,
Which strove with arduous toil, nor strove in vain,
To exalt amid Britannia's naiad train
The excelling virtues of the Sandrock spring;
Lo! languor, nerved anew, and vanquished pain,
Shall in the exulting tone of gladness sing,
Till ocean's neighbour here in echoing paeans ring.
And then some poet; then, when this faint lay
Sinks noteless, as the trampled sod when blend
Its minstrel's relics with their native clay,
His mighty lyre to chant the found shall lend:
Shall sing the explorer, and each patron friend,
Disease's rescued prey, the bard's acclaim,
Shall join, and loud re-echoing extend,
And thus in prayer and verse each honoured name
Shrined and embalmed, shall live the during life of same.
- Isle of Wight, 1809

The title of the second poem comes from Horace's Odes III, 13 dedicated to the Spring of Bandusia (Ad Fontem Bandusiae), and his promise to to immortalise the spring: "Fies nobilium tu quoque fontium" = "Thou too shalt become one of the famous fountains".

I don't like the sound of "quaffing the lymph" - especially as lymph nodes are not my favourite organ of late - but this is an archaic use of the term:


lymph
a. Pure water; water in general; a stream. Only poet. and rhetorical.
a1630   in Roxburghe Ballads (1871) I. 176   Here rurall gods and tripping Nymphs Did bath their corps in the pure lymphs And christal streams.
- Oxford English Dictionary