JSBlog has had a bit of a DWM (Dead White Males) bias lately, so here's a compendium of DWWWs (Dead White Women Writers) from The Picture Magazine, Vol 3, 1894. Published by George Newnes from January 1893 to June 1896, The Picture Magazine was quite an innovative format for its time, in being simply an eclectic mix of captioned images.

From the editor's introduction:


The appearance of a Magazine which, like the present, is absolutely different in scope and subject from all other publications, requires a few words of introduction.

THE PICTURE MAGAZINE will consist, as its name implues, entirely of pictures, accompanied only by sufficient letterpress for their explanation. The pictures will be selected from the best publications of all countries (special arrangements having been made with the holders of copyrights), thus forming an unique review of the world's illustrations, grave and gay. Arrangements have also been made for the introduction in an early number of original pictures under a novel scheme which will, it is believed, excite peculiar interest. The Magazine will comprise Fine Art Pictures by the greatest painters, Humorous Pictures from the best comic journals, Portraits of Celebrities, Pictures of strange and striking Places, and Pictures for Children; while novel features will be constantly introduced. Apart from the fact that illustrations thus selected have an interest of their own, as specimens of what is being done in every quarter of the globe, there are times when even the most omnivorous reader grows weary of the sight of type, and would gladly turn to pages in which he will find interest and amusement without effort.

In this belief, THE PICTURE MAGAZINE is laid before the public, with every confidence that it will quickly win itself a host of friends, of whose good opinion it will be the constant aim of its conductors to render it deserving.
- introductory editorial, volume 1, January-June 1893

People tended to cut it up for scrapbooks - the images were in categories such as Fine Art, Jokes, Portraits, Old Prints & Pictures, and Autographs - but such copies as exist provide a remarkable late-Victorian sampler. The 1894 compilation, for instance, contains a wealth of Victorian cartoons, photos of virtually the whole British Royal Family, and portraits of literary figures such as those following, from Portraits No. XV - Lady Writers. Unless you're into literary Victoriana, most of them are little-known now.


The Story of an African Farm which has been highly acclaimed ever since its first publication in 1883 for the bold manner in which it dealt with some of the burning issues of the day, including agnosticism, existential independence, individualism and the professional aspirations of women; as well as its portrayal of the elemental nature of life on the colonial frontier.
- Wikipedia


Miss Blanche R Roosevelt ("from a photo by Van der Weyde. Author of Stage Struck, etc").
An American opera singer and author - in later life the Marchesa d’Alligri - turned to authorship after her retirement from the stage, writing a mix of biographical works and novels. Her subjects included Longfellow, Doré, Elisabeth of Roumania, and Victorien Sardou. Her 1884 novel Stage-struck, or; She would be an Opera Singer obviously drew on her own background in the D’Oyly Carte Opera Company. The Copper Queen was a romance, of which George Bernard Shaw wrote: "It is difficult to describe ... To praise it would be treason to Literature; to condemn it would belie the sensation of reading it."


Miss Jean Middlemass ("from a photo by Russell & Sons. Author of Claude and Maude, etc")
London-born novelist, who initially published via her father under the pseudonym Mignionette, but came out as a prolific and popular author in the 1870s.


The death is announced, at the age of 85, at her residence in Eaton-terrace, of Miss Mary Jane Middlemass, one of the most prolific writers of popular fiction of the last quarter of the nineteenth century. It would be difficult to state exactly how many books she wrote but it is doubtful if she was exceeded even by Miss Braddon, to whose school she may be reckoned as belonging. When she began to publish in the 'seventies her work was promptly recognized as most suitable for the young person fir it combined abundant excitement and profundity of mystery with the strictest correctitude of morals. Even the worst of her characters is never guilty of any but the more reputable forms of villainy, such as murder and forgery, which would never bring a blush to the most innocent cheek.
- Times obituary, Friday, Nov 07, 1919

See Internet Archive "Jean Middlemass" for works. Helen C Black's 1906 Notable Women Authors of the Day has a chapter on her: pages 260-270. 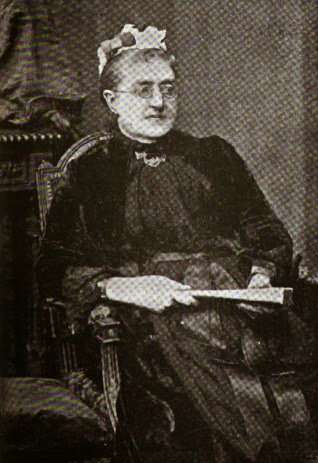 Mrs. Lynn Linton ("from a photo by Bassano. Author of Patricia Kemball, etc").
This is Eliza Lynn Linton, "British novelist, essayist, and anti-feminist journalist ... the first female salaried journalist and author of over 20 novels".


Her most famous essay on this subject, The Girl of the Period, was published in Saturday Review in 1868 and was a vehement attack on feminism ... Her obituary in The Times noted her "animosity towards all, or rather, some of those facets which may be conveniently called the 'New Woman'," but added that "it would perhaps be difficult to reduce Mrs. Lynn Linton's views on what was and what was not desirable for her own sex to a logical and connected form."
- Wikipedia

See Wikipedia - Eliza Lynn Linton / Works - for a good link compilation for her works. Helen C Black's 1906 Notable Women Authors of the Day has a chapter on her - pages 1-10.


Miss Florence Warden ("from a photograph. Author of A Wild Wooing, etc).
This is Florence Warden (1857–1929),  born Florence Alice Price, and later married to George Edward James. She was an immensely prolific but financially unfortunate author of melodramatic romances, generally concerning courtship and marital dilemmas (see the Answers.com entry from the Oxford Companion to Edwardian Fiction).


Mrs L.T. Meade ("from a photograph. Author of Jill, etc").
L.T. Meade was the pseudonym of the Irish-born Elizabeth Thomasina Meade Smith (1844–1914), a prolific writer of girls' stories. Although she was best known for her works for young readership, she wrote in a variety of genres - 'sentimental' and 'sensational' stories, religious stories, historical novels, adventure, romances, and mysteries, including several with male co-authors" including Robert Eustace. A feminist and member of the Pioneer Club, she founded and edited the proto-feminist girls' magazine Atalanta, which regular readers will recognise as a venue for many poems, stories and serialised novels of Maxwell Gray.


Lanoe Falconer ("from a photograph. Author of Mademoiselle Ixe, etc").
Lanoe Falconer was the pseudonym of the writer of novellas and short stories Mary Elizabeth Hawker (1848–1908). Born in Aberdeenshire, she grew up in Hampshire, at Longparish House, near Whitchurch, and spent most of her life in that area. This background is reflected in what's probably her best-known work Old Hampshire Vignettes (1907 - see Salamanca Corpus). 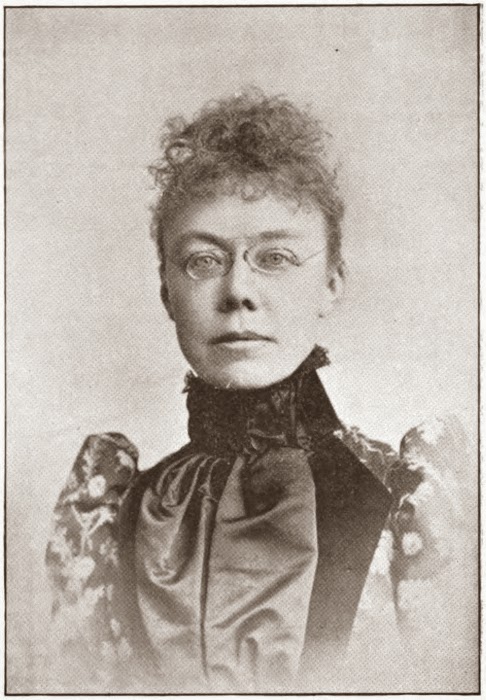 Her output severely limited by ill-health, she left a small but acclaimed corpus of work. The Unobtrusive Miss Hawker, the 2009 biography by the biographer and historian Peter Rowland, looks rather interesting, but I'm sure not going to pay nearly $80 for it. There is, however, an out-of-copyright 1915 biography, Lanoe Falconer (Evelyn March-Phillips, Internet Archive lanoefalconer00phil) - the frontispiece is the source of one of the few portraits of her (see Peter Rowland's gallery and Flickr page for others).


Miss Amelia B Edwards ("from a photograph. Author of Debenham's Vow, etc").
This is Amelia Ann Blanford Edwards (1831-1892), the English novelist, journalist, traveller and Egyptologist. It's hard to add to the excellent account on the Penn Libraries A Celebration of Women Writers site - Amelia Ann Blanford Edwards (1831-1892) - which looks at her triple career as a successful novelist, a journalist specialising in travel writing (chiefly via her accounts of distinctly intrepid explorations of areas almost unknown to tourists, accompanied only by her companion of thirty years, Lucy Renshaw); and as an Egyptologist.


John Oliver Hobbes (Mrs Craigie) ("from a photo by Van der Veyde. Author of A Study in Temptations, etc")
This is Pearl Mary Teresa Craigie (1867-1906), the Anglo-American novelist and dramatist. I've written about her before, as she has an Isle of Wight connection. Her father was John Morgan Richards, a late-Victorian fatcat who made his fortune from quack medicines and popularising cigarettes, then retired to play lord of the manor at Steephill, near Ventnor (see The writer, the cancer-merchant, his eccentric wife, and the faux castle). She came to the nearby Craigie Lodge to write (dramas and novels on social/relationship themes, with a distinct Catholic slant); rejected the overtures of the chemical magnate's artist son Walter Spindler (see Old Park - and a stormy friendship); then died unexpectedly of a heart condition at the early age of 38. There's a good, if understandably hagiographic, account in the biography by her father, The life of John Oliver Hobbes : told in her correspondence with numerous friends (pub. J Murray, New York, 1911, Internet Archive lifeofjohnoliver00hobbuoft).