The Eyes! The Eyes! and other ads 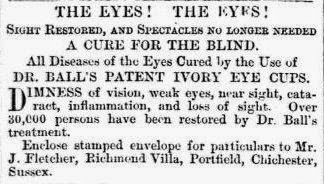 It goes without saying that ads for scammy products are nothing new, especially in the days before the Advertising Standards Authority, but these (among many) caught my eye while I was browsing the Isle of Wight Observer for April 05, 1879.

Dr Ball's Patent Ivory Eye Cups sound particularly horrible. The Quack Doctor site ("I was disappointed to learn that Dr Ball’s initial was J, not I") has a piece on them, explaining the mode of action - suction, to bring arterial blood to the enfeebled eye. This sounds like a precursor to The Deacon's line in Waterworld: "If you'll notice the arterial nature of the blood coming from the hole in my head, you can assume that we're all having a real lousy day". 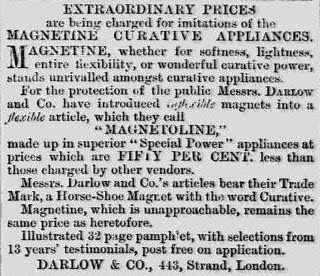 Magnetism is ever-popular as a bogus remedy. Here was one for the products of Darlow & Co (who otherwise made surgical corsets and trusses, etc). Their "Magnetine" and "Magnetoline" involved wearing magnets, as described in this other advert:


PREVENTION AND CURE OF CHOLERA.

THIS terribly fatal malady is now within measurable distance of our own shores. It therelore behoves ua not only to look well to all our sanitary arrangements, but also to protect ourselves as far as possible from any personal attack.

In localities where Cholera has been raging, it has been noticed from time to time, by many eminent medical men and others, that Oxygen, in its allotropic form, 'Ozone,' has been absent from the atmosphere. In 1H.M Dr. Boekal, of Strasburg, made regular ozonometric observations in that city, and was thereby led to suppose that a connection exists between the presence of Cholera and the diminution of the quantity of ozone in the atmosphere.

The inhalation of oxygen may be very good as a remedial agent in the collapse stage, but we have to consider the best means of keeping the body well supplied with the necessary magnetic power to enable the arterial blood to take a sufficient quantity of oxygen from the atmospheric air, and carry it through the blood-vessels to every part of the body. By wearing Darlow's Magnetine appliances which supply the requisite amount of the electric force, without the aid of acid or fluid of any kind, the body can be fortified against Choleraic attacks. The appliances require no cleaning, nor.'indeed, any care or attention whatever. They are put on with the garments when dressing in the morning, and generally laid aside on retiring to rest at night. They give no shocks, and cause no sores. Their action on the system is gentle and imperceptible, but then it is continuous; it may go on unceasingly every moment, night and day. and yet this is entirely at the option of the wearer, who may lay the appliances aside when he pleases. As a rule they are not worn during the night. But they are always ready, always effective, and gradually produce a most beneficial change in the condition of the entire frame. For the most part they are unfelt in their operation—they cannot harm an infant—and the most delicate invalid may be under their Influence without having the consciousness of any unpleasant or even unusual sensation, except it be, indeed, the delightful glow of returning health and strength.

Here's another ad from the 1886 Arrows and anecdotes by Dwight L. Moody: 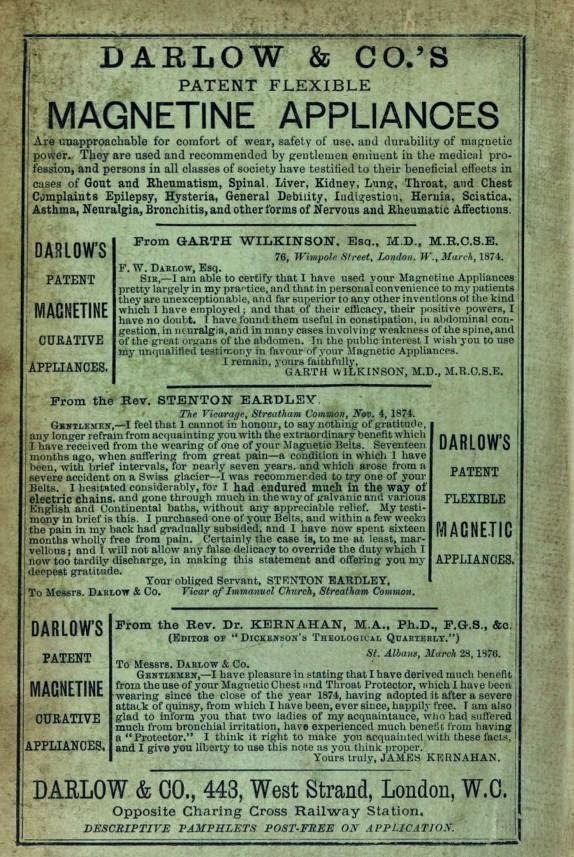 And on to Halse's Galvanic Apparatus: 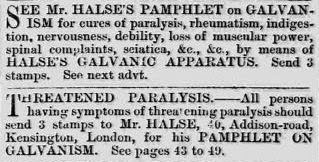 This was the mesmerist and galvanic therapist William Hooper Halse's device to give the patient electric shocks:


Halse's ten guinea Galvanic Apparatus, which has now become so celebrated, consists of twelve pairs of zinc and platinised silver plates, and a most complete  regulating apparatus, with handles, wire, &c. The whole is contained in a neat mahogany box, about eighteen inches long, eight inches wide, and seven inches high, and when in action it is an ornament to any drawing-room, and is, in short, perfection itself.

You can read all about in Halse's own pamphlet, On the extraordinary remedial efficacy of medical galvanism when applied by means of Halse's galvanic apparatus (1883, Internet Archive onextraordinaryr00hals). Some 40 years before he turned his electrical interests to therapy, Halse had conducted "curious experiments ... in cases of suspended animation": rather a euphemism for deliberately drowning a litter of spaniel pups in a bucket, and seeing if he could revive them by zapping them with electricity. If you want to read this piece of nastiness, it was reported in The Chemist (ed. Charles Watt, 1840): Power of Galvanism in Cases of Suspended Animation. 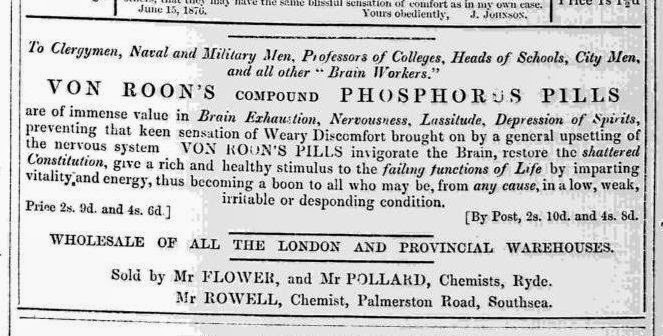 No luck on finding more about the above. 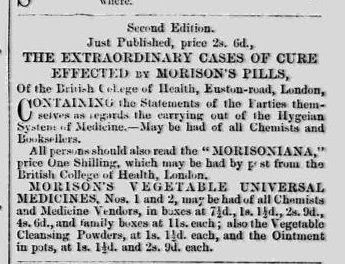 This is an especially quacky one. Morison's Pills were the invention of the "quasi-physician" James Morison. They were, according to Wikipedia:


what he called the 'vegetable universal medicines,' commonly known as 'Morison's Pills,' the principal ingredient of which is said to be gamboge

There's a detailed history of the product, and Morison's "British College of Health" at the UCL Bloomsbury Project. Morison did a runner to France after a series of deaths attributed to these "vegetable pills", such as this one reported in The Lancet in 1838. Nothing much changes: although it's a different gamboge, we're still being scammed by ads for Garcinia gambogia nostrums.

... this isn't a quack remedy ad, but it intrigued me. Despite it looking like an ad for dubious sexual services, it's actually promotion for Thomas Lloyd Fowle's novel Gentle Edith: A Tale (1879).


Gentle Edith: A Tale. By Dr. T. Lloyd Fowle (Charing-cross Publishing Company.) This story is made up of religion, law, love, and stage-coaching. Edith, the heroine, an accomplished young lady, is the daughter of a retired banker, hence her suitors are numerous. She at length marries a young man of good family, and the bishop of the diocese graces the wedding breakfast with his presence. The story is for the most part simply told, and if the plot is meagre, the heroine helps to make up for it by being a tolerably good character.
- The Literary World, 1879

One might imagine that it's rather slight, given that Fowle (1827-1896) appears to be more of a musician than a novelist ...


Fowle, Thomas Lloyd, organist, writer and editor, born at Amesbury, Wilts, October 16, 1827. His father was a clergyman, a prebendary of Salisbury. Self-taught in music, he acted for some years as organist at his father's church, Amesbury, and later at Crawley, Sussex. From 1856 to recent times he has been engaged as editor and publisher. He is Ph. Doc. of Giessen. He has published 4 vols, of anthems; 5 cantatas; 4 vols, of organ voluntaries; 12 marches for special seasons; The Church Tune Book; 2 Services, and numerous other musical works. Handel, a memoir; Charles Dickens, a memoir; Gentle Edith, a novel, and miscellaneous writings.
- British Musical Biography, James Duff Brown, ‎Stephen Samuel Stratton, 1897

... but it is findable online via the British Library record (BLL01014811098). It has a lengthy "It was dark and stormy night" introduction - or at least "It was a depressing autumn day".


To a thoughtful and contemplative mind the season of autumn must always impart a tinge of sadness. The whole face of Nature becomes changed, and that which the outward eye perceives the inward mind can be no stranger to. Almost everything seems ready to decay, save the evergreen shrub which stands forth as an emblem of that life which never dies. The rich golden tints in the nobleman's park would appear to deceive us for a brief moment, so brilliant is the lustre they shed with the setting sun fast sinking in the west. But their glory is short and of a transient date, for soon the gorgeous hues become too sombre to excite admiration; the dead leaves fall around us on every side, and the trees raise their lofty boughs with all the appearance of never-ending barrenness and desolation. The mind of youth dwells but little upon such a scene, the natural buoyancy and vigour of early days being at variance with contemplation. Middle age becomes grey and somewhat thoughtful at the prospect of descending the hill of life, and, beginning to view the outer world and all things therein under a different aspect, the mind is occasionally absorbed in meditation. But it is to the fast-setting sun of threescore years and ten to whom autumn's fading hour reads her most solemn lesson.
...<more snipped>
We have been thus sentimental upon the subject of autumn because our story commences at that season of the year—namely, October, 1833.
- Gentle Edith: A Tale, Thomas Lloyd Fowle, 1879

(PS The book is of marginal interest on a bibliographic and biographic basis, as it ends with a list of TL Fowle's musical, religious and literary works, as well as a reprint from the Sunday Times of news of the petition sent to the Prime Minister asking that he be given a Civil Service List pension, on account of his financial and health hardships after long service as "The People's Musician". His age and health circumstances go a long way toward explaining the tone of the novel's introduction. The 1886 Biographical Dictionary of Musicians entry (page 253) mentions that the pension wasn't granted, as well as the detail that Fowle was a resident of Ryde, Isle of Wight - which further explains both why the ad was in the Ryde-published Isle of Wight Observer, and why "Gentle Edith" and her husband take their honeymoon on the Island).