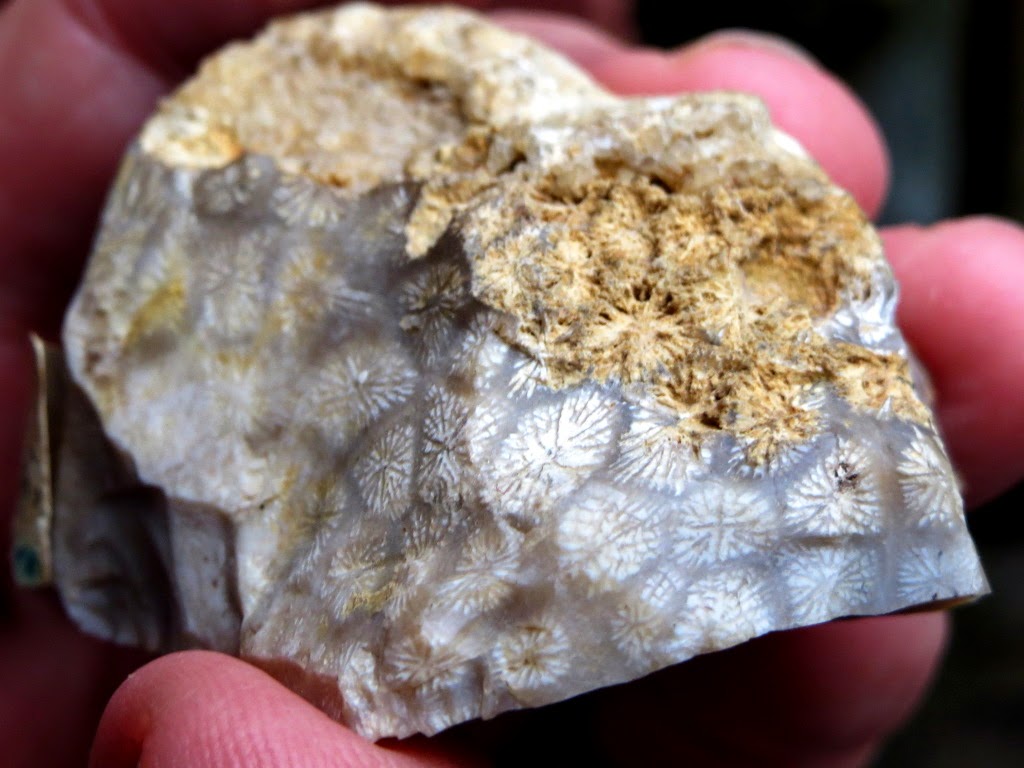 Last week, passing through Tisbury on the train jogged my memory to look up "Tisbury Starred Agate". I've had this nice specimen for decades - I can't remember where I got it - but never bothered to look up its provenance.

Tisbury Starred Agate (which goes under various other names such as Star Flint, Star Coral and Tisbury Coral) is silicified Isastraea oblonga, a Jurassic fossil coral. The strata near Tisbury where it's found are unique to Britain.

It appears in the naturalist John Woodward's 1728 catalogue of his fossil collection:


k. 44. A ſtarr'd Agate very beautiful; it is chanel'd on that part of the Outſides which is remaining, exactly after the manner of a ſtarr'd Honeycomb-ſtone: and I have ſeen ſeveral others, that have had Stars on the Outſide [as indeed this has in one part, tho' not ſo fair as ſome I have ſeen] like thoſe of the Honeycomb-ſtone exactly. This was found, amongſt ſeveral ofhers, lying on Floors, like the common black Flints, amongſt Chalk; and indeed like the Honeycomb-ſtone about Oxford. Underneath theſe Floors of ſtarred Flints lay Strata of Sand-ſtone, in a Quarry in Tisbury-Pariſh, about five Miles from Shaftesbury. I obſerv'd ſome ot the Flints from this Place had but very few Stars in them .. and thoſe in Spots; part of the Flints being free, and without any Stars at all.
- page 77, An Attempt Towards a Natural History of the Fossils of England, Tome 2, John Woodward, 1728

(Woodward is an interesting figure in the development of geological thought. His observational methods were impeccable, and he recognised the importance of strata in rocks, and correctly deduced the marine origin of many fossils - but he ascribed their existence to the biblical Flood. See Google Books - ID URhc2d-4qmMC - for his 1695 An essay toward a natural history of the earth and terrestrial bodies, especially minerals : as also of the sea, rivers, and springs, with an account of the universal deluge : and of the effects that it had upon the earth).

Although Woodward gave the first account of this "Starr'd Agate", the material was evidently known and prized even in pre-history. Flakes of it were found by Alvan T Marston in the classic Swanscombe palaeolithic deposits as 'manuports' from the Tisbury deposits 193km away: see Origins Net / Later Acheulian Exotic Stones. There are a number of good images online: for example, "Isastraea oblonga, polished coral - Image ID: 042962" in the Natural History Museum Picture Library; and these images (as "Tisbury coral") in the Rock Tumbling Hobby forum.

It appears in several subsequent geological accounts. For instance:


The chief area occupied by this [Portland Beds] formation lies to the west of Tisbury, where it constitutes some high ground in the direction of Newtown and Pyt House ; the surface of this part of the country conforms to the curve of the beds, which are squeezed up by the anticlinal, whose axis here occurs very near to the northern edge of the Portlands, just beneath the woods of Fonthill. There is a "gravel pit" (so called) on the summit curve of the Portlandian bulge, which is in fact a mass of Portland stone decomposing in situ, with the flinty portions remaining as undissolved fragments, the whole being in great confusion, but without evidence, as far as I could see, of having been transported from any considerable distance. This material is at present worked for road stone, and contains, along with other siliceous fossils, the celebrated 'star flint'  in considerable abundance.

The spot whence Isastraea oblonga was formerly obtained would appear to have been . in a field north of Tisbury, on the Fonthill road. With reference to this Miss Benett says (op. cit, p. 4), "The Siliceous madrepore of Tisbury is a subordinate bed in this (the Portland) series, and which has not yet been found elsewhere, with the exception of the agatized madrepores of Antigua : they were first discovered by being turned up by the plough; but the sinking of a well near the inn at Fonthill Gifford has proved their geological position to be over the Portland rocks ; they are extremely local." The following postscript is added : — "Geological position of the siliceous madrepore. The sinking of a well in the field called Butcher's Knap, in the parish of Tisbury, the only place where the Coral Flint has been found, and which led to the discovery of the bed."
- page 166-7, On the Geology of the Vale of Wardour, WH Hudleston, Proceedings of the Geologists's Association, Volume 7, 1881-2, 1883 (Internet Archive ID proceedings17assogoog).

"Miss Benett" refers to the collector and geologist Etheldred Benett:


She was Etheldred Bennett [sic], a great-granddaughter of a seventeenth-century Archbishop of  Canterbury. She was born in 1776, and she definitely met William Smith – indeed, gave him a piece of the well-known Tisbury Coral, of which she was England's best-known collector. She made a speciality of exploring the Middle Cretaceous Upper Greensand in the Vale of Wardour, in Wiltshire: as a relative wrote, 'while other ladies of her time were doing needlepoint and chattering over their cups of India tea, she became competent at systematic scientific research, as well as the vigorous fieldwork of fossil hunting'. She had a monograph privately printed: A Catalogue of the Organic Remains cf the County of Wiltshire. All evidence suggests she died a maiden aunt; her family insisted that one of the specimens later placed in her collection, nestled among her sponges and her corals, and thanks presumably to a cooperative undertaker, was her own heart, unbroken but quite petrified – transformed to resemble a stone, as a geologist's heart perhaps deserves to be."
- page 114, The Map That Changed the World: A Tale of Rocks, Ruin and Redemption, Simon Winchester, 2002

(A Catalogue of the Organic Remains of the County of Wiltshire (1831) is online: Internet Archive ID acatalogueorgan00benegoog).

I don't know how findable the Starred Agate is nowadays, but a Geological Survey technical report gives locations:

The environs of Tisbury is altogether an interesting area, not far from the scenic Fonthill Lake ...

... where an easy walk - see Fonthill's Fantastic Folly - takes you through part of the Fonthill Estate, the site of some remarkable folly-building in the 18th century by the immensely rich collector and aesthete William Beckford, including the Fonthill Grottoes, now off-limits as a SSSI as a bat hibernatorium. As the listed buildings record (ID 321012) says, the grottoes were built by Josiah Lane of Tisbury, who specialised in that area: his other works include the grotto at Old Wardour Castle and that at Stourhead. It was written of Lane after his death that "He was perfectly ignorant, but certainly had a genius for this kind of construction".

For more background, see Maxwell Steer's The Grottoes of Fonthill, and Rictor Norton's A Visit to Fonthill. As the latter article mentions, William Beckford's notoriety was undoubtedly fuelled by his being homosexual; but nevertheless, some of the works he commissioned were undoubtedly "more money than sense" jobs: notably Fonthill Abbey, which must have been an amazing sight ... 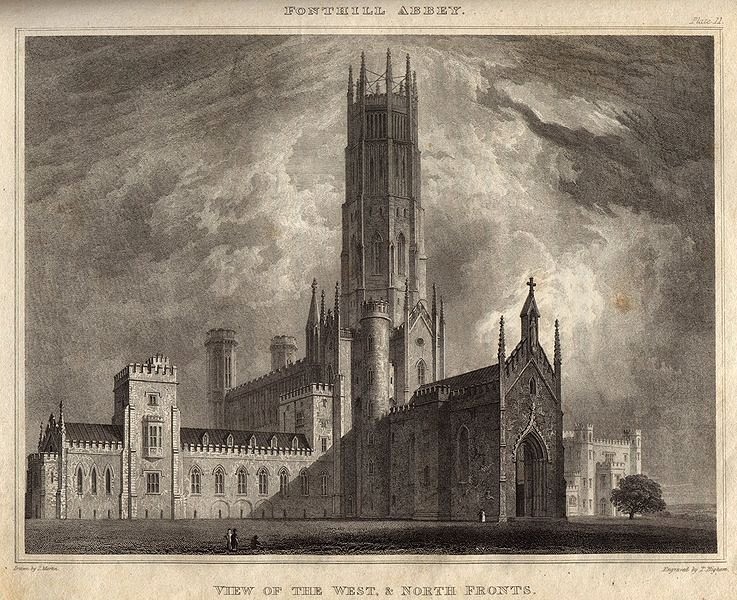 ... before it collapsed. Six times. 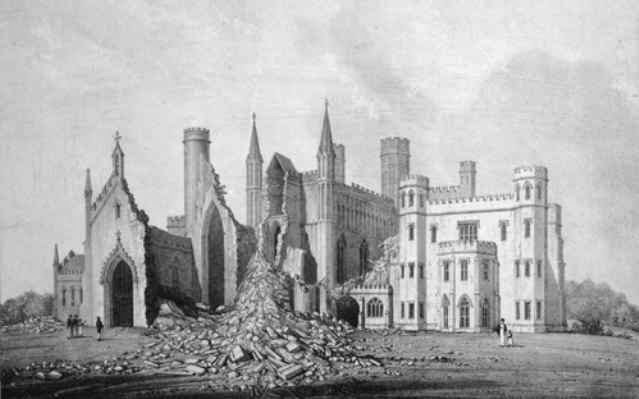 Addendum: I just found in my collection this other little specimen, about an inch high and polished as a pendant. It's starting to ring bells; I think I might have been given both pieces by one of my distant aunts (or whatever relation my mother's cousins are) who was from Wiltshire. 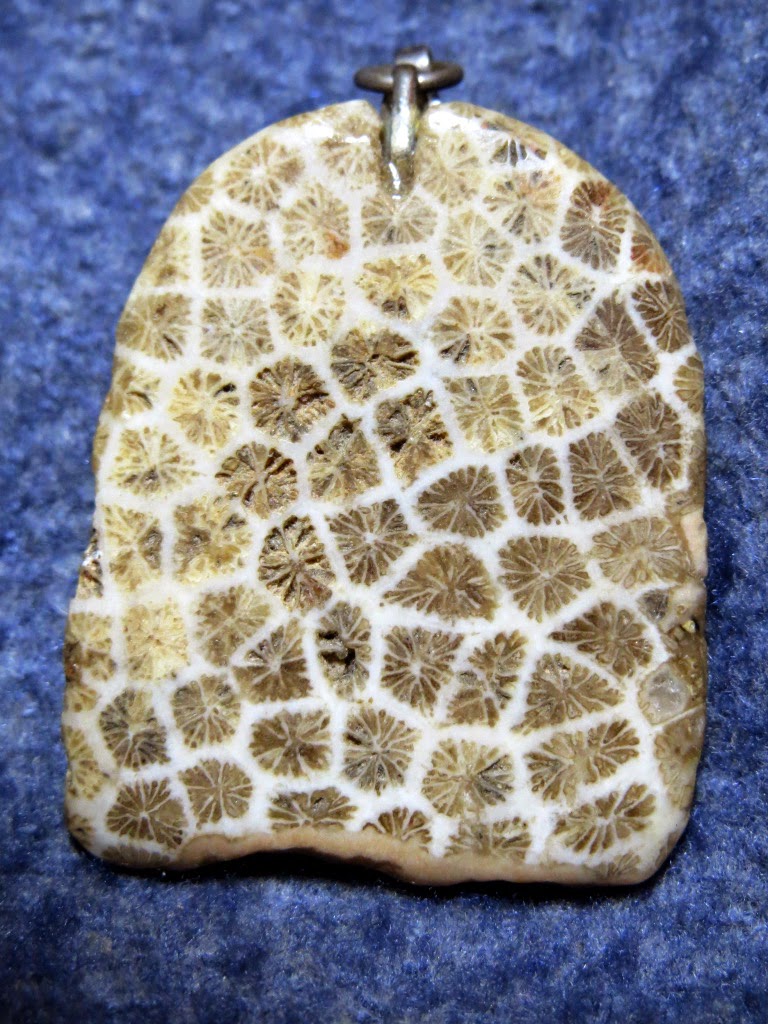