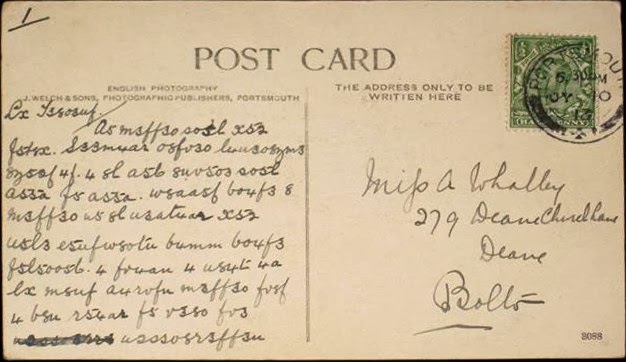 It was posted from Portsmouth - date unclear - to a Miss A Whalley, 279 Deane Church Lane, Deane, Bolton, and contains a coded message. Luckily the handwriting is very legible. It smelt of a simple monoalphabetic substitution cipher, and going from a couple of guesses - that "4 8l" = "I am", and that only "noon to noon" made sense for "a55a f5 a55a" - it turned out to be just that, and I managed to decrypt it without great difficulty. 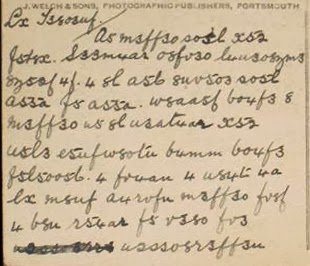 My dearest /
No letter from you today. Feeling rather miserable about it. I am now ashore from noon to noon. Cannot write a letter so am sending you some postcards. Will write tomorrow. I think I said in my last nights letter that I was going to hear the suffragettes.

I'm not sure what else can be deduced. It's most likely from a male sailor, but if the date is very late WW1, it could be from someone in the Women's Royal Naval Service. Does the encryption imply a date bracket? I would have thought sending encrypted postcards in wartime would attract official attention. (Edit: John has just confirmed that the date is July 10th 1913). The message is hardly deep stuff, but there's social history in there, and something very poignant about unlocking a tiny 'time capsule' of someone's life.

Coded postcard messages aren't wildly uncommon, and have a following. See Coded Love on postcards, which explains the context: the wish to hide messages in the Edwardian heyday of postcards, the decade after 1902, when the Royal Mail first permitted the modern format of postcard, with picture on one side, address and message on the other. There's a nice case study at the Gustavus Adolphus College blog - Breaking a Code Spanning Decades - which revealed the correspondence in the early 1900s between a Swedish-born minister and his girlfriend, conducted in English in a monoalphabetic substitution cipher based on a runic alphabet.

They're not all as easily decrypted as the Portsmouth example. The linguistics weblog Language Log occasionally tackles far more difficult cases, such as Postcard language puzzle ("Spanish disguised by a simple substitution cipher, with the vowels and consonants substituted separately so as to preserve the n-grammatical appearance of a real language"); Japanese postcard puzzle ("we know the language and script, viz., Japanese, but the handwriting is so calligraphic and 'grassy' that it cannot be fully understood even by most highly literate Japanese"); and the so-far not fully solved Another language/script puzzle (a footnote to a US Civil War letter in a strange script or code, possibly Irish-based).