Further to The Sandrock Chalybeate Spring, I just found a very nice guidebook relating to a similar venture to revive an old Isle of Wight spa.

Worsley's The History of the Isle of Wight says (without citation) that:


A ſpring, impregnated with alum, was diſcovered at Shanklin, by Dr. Fraſer, Phyſician to Charles the Second; it was for ſome time drank, as it is ſaid, with ſucceſs; but as the reputation of theſe ſprings depend much on faſhion, it was gradually diſused, and at length neglected.
- page 6, The History of the Isle of Wight, Richard Worsley, 1781

Whatever the prior history, it was forgotten until the late 19th century saw an attempt to revive it, first by the career victualler Archibald Hinton, who bought the Esplanade Spa Hotel in 1874 (ref: Isle of Wight Observer, June 13, 1874 - the business of the previous proprietor, William Murley Summerhays, had gone into liquidation in 1871). Hinton rebadged it as the Royal Spa Hotel, and piped the water to the hotel and esplanade. It was evidently his retirement project, and a right luvvy-fest it sounds:


After a roaming life at Cherbourg, Hayling Island, and elsewhere, Mr Hinton has settled down at Shanklin, in the Isle of Wight, and is now "mine host" of one of the prettiest and most romantic seaside hotels in this charming island. Here at the Spa Hotel, next door to the lovely Shanklin Chine, Mr Hinton welcomes every theatrical and art-loving face, and over the comfortable fire in the winter, or walking by the waves in the summertime, loves to talk of the drama, music, old friends, and old days!
- Theatrical Gossip, The Era (London, England), January 27, 1878

He didn't, however, organise it very well, as the acidic water corroded the iron pipes. But after his death in 1883, the new owner (the chief proprietor and manager Alfred Greenham) eventually re-established the supply, and chaired a consortium that set up an adjacent Spa with baths modelled on similar Continental ones such as Bad Homburg. It was launched with a considerable junket in August 1900.


Shanklin Spa Baths
The Shanklin Spa Baths were opened, in the presence of a large gathering of residents and visitors, by G. H. R. Dabbs, Esq. M.D., J.P., on Tuesday last, at 1.30. Representative men from other parts of the Island were present, including Mr H. T. Dodsworth, chairman of the St. Helen’s District Council, Dr. Barrow, and Mr. W. Gibbs. The local medical men were also present. The bath houses are beautifully tiled; with a floor of mosaic Venetian marble. There are four brass baths for the ferruginous water, two deep marble baths, needle, douche and spray baths. The brass baths were made in Hamburg, and Shanklin now possesses the only iron water baths in England heated on the Continental system. Admiration was expressed by all at the installation of such a beautiful suite of  baths. They are situate adjacent to the Royal Spa Hotel, almost opposite the pier. After the opening a luncheon was given by the directors, to which about 40 sat down. The Chairman (Dr. Dabbs) gave, in an eloquent speech, “The Queen and Royal Family,” and afterwards “Success to the Shanklin Spa Baths,” to which Mr Alfred Greenham, chairman of the Spa Company, replied. Dr. Barrow submitted the toast of “The Chairman of the meeting” (Dr. Dabbs), which was enthusiastically received.
- Isle of Wight Observer (Ryde, England), Saturday, August 18, 1900

This is the context for the promotional guidebook Shanklin Spa: A Guide to the Town and the Isle of Wight ("Monopole", pub. Silsbury Bros, Shanklin, 1903 edition: Internet Archive ID shanklinspaagui00monogoog). Once you get past the patches of purple prose ...


Look upward and you will see the roofs of the houses on the Cliff; walk up the steep hill by the little wayside but picturesque Chine Inn, and wend your way to the Green — Keats' Green, so named after the immortal poet, who once resided here. What a lovely view of ocean and land meets the eye, what pretty villas encompassed on every side by shrubs all of luxurious growth. This is the "cream of Shanklin " some will say, and here again you have one of  the "other" climates. Breathe it in ever so gently, here the land and sea breezes join together, and what a delicious mixture it makes, soft yet invigorating ; breezy, but with the sting of the gale taken out of it. Here you can sit and revel and hear the splash of the sea lapping over the shingly shore far beneath you. Come a little later, and watch the evening moon rise out of yon horizon, watch it stealing into the heavens, and see it cast its shiny path on the broad expanse of the channel before you, see it tinge the crest of the wavelets with a dazzling light, as they dash off the gently sloping beach with the ascending tide, and you will behold a sight you will never forget. Walk down the hill and see the coppery golden hue of the moon's mellow beams falling on the ancient thatch of the rustic Chine Inn, see the shining silver sheen as the trees rustle to and fro in the weird silence of the enchanted Chine at the midnight hour, and you will stand in awe enraptured with the scene. Verily this is a sight worth the vigil of the midnight hour, as the peal from the clock tower reverberates among the trees.

... it's a very informative guide to Shanklin of a century ago, augmented by the interest of the trade adverts, which give a real feel for the 'ecology' of a genteel resort at the beginning of the 20th century.
It refers in passing to a comment by the popular novelist "Ouida":


These were the days which "Ouida" once wrote about, and regretted that they had passed away—passed away in Shanklin's progress—many would still say, perhaps without regret. 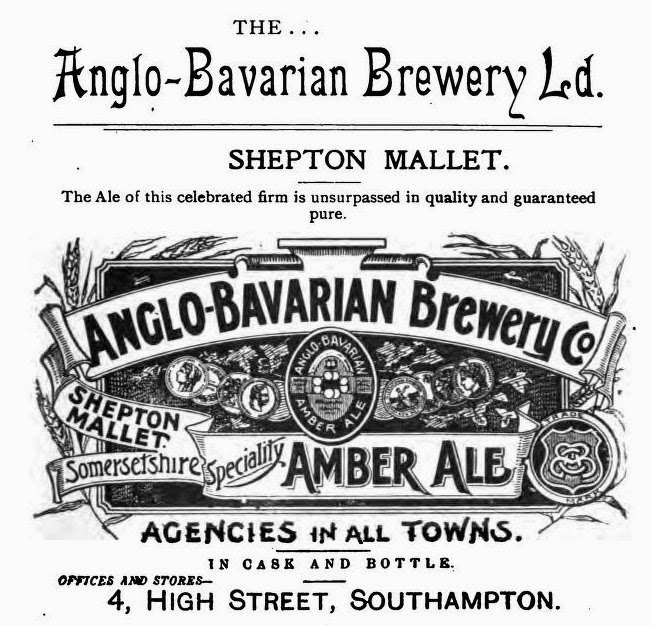 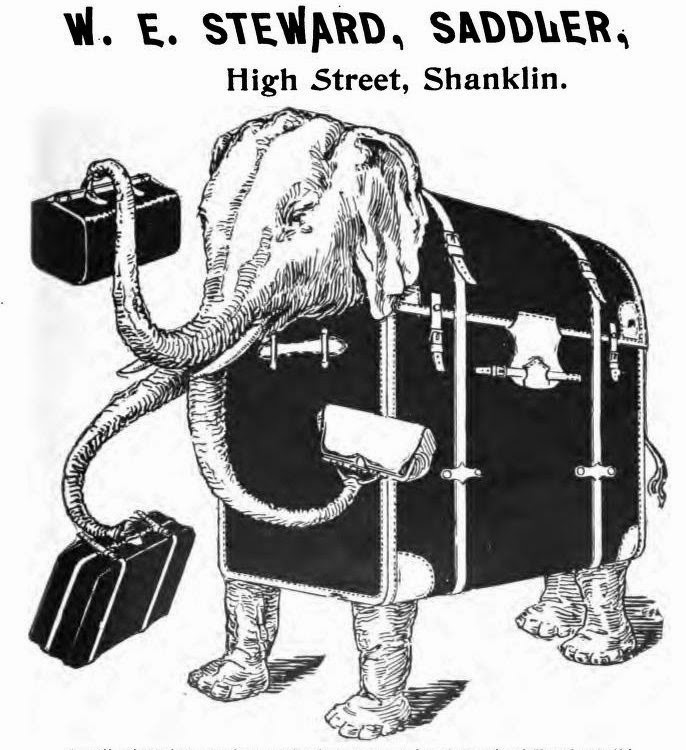 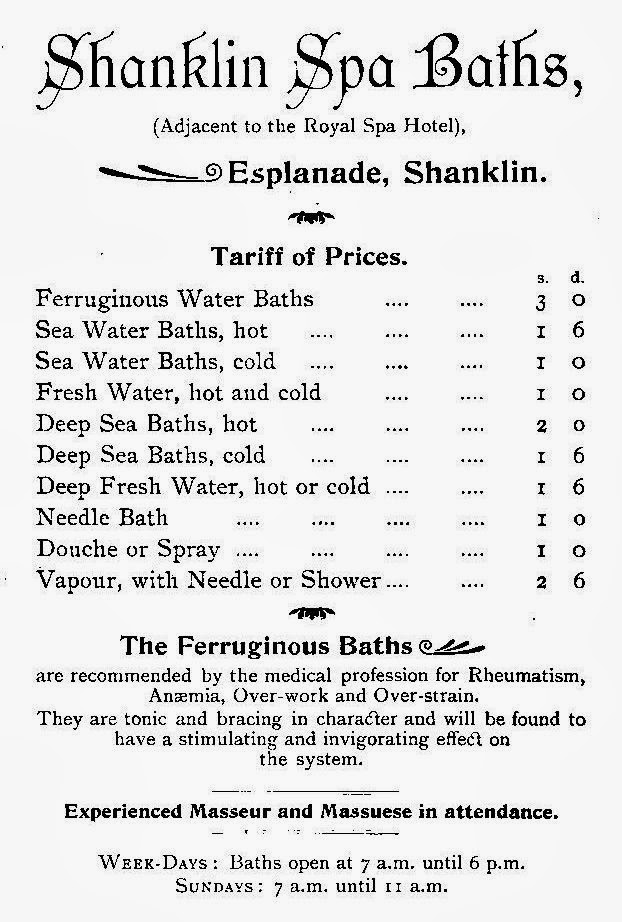 The Royal Spa Hotel thrived until it was bombed in World War 2 - see Glory days of Shanklin uncovered (Richard Wright, Isle of Wight County Press, May 18th, 2012) - and it was never rebuilt. It is remembered, however, via the name of the Spa Car Park adjacent to the Lift.