... and the mysterious "Monopole"

Further to the previous post, I wonder who was "Monopole" who wrote Shanklin Spa: A Guide to the Town and the Isle of Wight?

The preface to the book indicates that the author was from Shanklin, and the title page above gives a few other works: His Last Amour; Wrecked; and A Visit to the English Spas. Of these, I can only find details concerning the 1895 His Last Amour;  I can't even find references to the titles of the others, much less the text. First, the reviews, which were mixed:


"His Last Amour." By Monopole. London: Digby, Long & Co. 1894.
The lovely Valerie was to be forced to marry a man old and ugly. As a last resource it occurred to her that, if her reputation were to be tarnished, the old and ugly one would be only too glad to be rid of her; so, a wicked duke coming in her way, the process of tarnishing sped apace, and Valerie hoped that the story of "His Last Amour" would "choke off" her aged and repulsive betrothed. If the reader's edification at this incident will be great, still greater will be his astonishment at learning that a solicitor, with a large practice and living at a " stately country house," could not raise £iooo for the assistance of a friend without resorting to forgery, and that one way of arriving at the peaceable possession of an estate is to burn the title-deeds. Other wonderful things concerning the manners and customs of ladies and lawyers and wicked dukes may be found in " His Last Amour," which is by no means an unreadable book, in spite of its peculiarities.
- The Saturday Review of Politics, Literature, Science and Art, Volume 79

Valerie Campbell, in order to save her father from exposure and conviction as a forger, is forced to consent to marry a man old enough to be her father. But her heart is already given elsewhere, to one Gerald Methuen. To escape her fate, she undertakes, with her lover's consent, to make the old man think that her honour has been compromised, and she finds a ready tool for her purpose in a certain. Duke of Yaverland. She repairs to his apartments at one o'clock in the morning, knowing that her aged fiance is on the look-out. "His Grace," however, is naturally somewhat nettled to find that he is being made a fool of, as he expresses it, but, when he finds out in the course of conversation that the girl's lover is his own son, he repents in sackcloth and ashes, "and he mentally vowed to Providence in that moment that, if this secret were only preserved, it should be 'his last amour.'" The if is delightful! He, however, keeps his vow, Valerie marries Gerald and all ends happily, a lucky chapter of accidents (also in connection with an amour) having freed her from her aged lover, who takes himself off the scene by an overdose of laudanum. There is little in the book to justify the selection of such "shady" material for a plot. The characters are weak and uninteresting (the very insipidity of the heroine, with her ideal of marriage with a "real live lord " as the summum bonum of existence, almost kills any sympathy her position might call forth), the real live lords themselves walk and stalk as the puppets of a servantgirl's imagination; the love-making scenes read more like passages from a farcified Romeo and Juliet than anything else; while the style is crude and amateurish to the last degree. One example will suffice: Valerie "seemed to contract in a moment, if the fringe of her pride were but touched, and secrete within herself the drawbridge of companionship which was so often let down," &c.; in the next sentence, "she curled herself up as rapidly as the sensitive plant when touched roughly "; and in the next page, "like the snail which is touched on the tenderest part she receded into her shell, and remained silent." Poor Valerie!
- The Westminster Review, Volume 143

There is not very much in this novel to suggest the somewhat suggestive title. There are a gipsy prophecy, a lovely heroine, and a villain. There is also a wicked duke, who tries to ruin the heroine and nearly succeeds, only to find that if he had succeeded he would have blasted his only son's life. However, the villain is duly punished, the duke repents, the prophecy is fulfilled, the duke's son marries the heroine, succeeds to the title, and—there is the end.
- The Bookseller

There is a simple freshness about 'Monopole's' story, His Last Amour, that will act soothingly on minds overwrought by too-powerful fiction. It concerns a disreputable old man of great wealth, who gets a country lawyer into his power by a somewhat clumsy artifice, on the author's part, and demands marriage with his victim's daughter as the price of his silence. This girl, by the way, is rather a good character, and she is represented as being particularly beautiful, attractive, and wayward. The man, whose 1 last amour' might be supposed to occupy the book, is a handsome duke, with 'dark eyes that seem to pour out a power.' He comes in at the close of the story, and acts the dual and somewhat difficult character, we should imagine, of penitent and benevoleut fatherhood. It would be a pity to detail the story, so we will leave it to the reader intact. It is more impressive to discover for oneself that 'the awful sufferings of a blasted earthly love probably excel the pains of purgatory' than to have the painful fact pointed out by one whose senses are so dulled by daily routine that he is not properly able to realise that if these 'awful sufferings' do not act in the manner indicated,' the infinite does not terrify, because the finite mind cannot grasp the retribution of the future.'
- The Literary World, Volume 51

We regret that we cannot congratulate the anonymous author of “ His Last Amour ” upon the result of his labours. The story is evidently “ Monopole’s” first attempt in fiction, and, if he be well advised, it will surely be also his last, for not only inexperience, but utter incompetence, stamps every line of this tedious tale. From first to last, no trace of ability, either literary or constructive, appears in “ His Last Amour." Ridiculous in plot, vapid in characterisation, and conspicuously lacking in any elements of interest, the story is a failure from every point of view. It concerns itself with the fortunes of some marvellously foolish persons, whose grotesque unlikeness to real human beings, both in character and conversation, forms the only amusing feature of the book. There is a wonderful lawyer, who, being applied to by a client for a loan of one thousand pounds, instantly decides to raise that sum by means of fraud and forgery. This sagacious lawyer is blessed with an equally wonderful daughter, who, being desirous to avoid marrying an elderly admirer, promptly arranges to ruin her own reputation by a midnight interview, under highly compromising circumstances, with a dissipated duke, hoping to goad her unwelcome wooer into breaking off the match. As all the personages in the book behave with a similar lack of common sense on every occasion, the story resembles rather a caricature than a portrait of the everyday life it professes to paint. “His Last Amour " is, in fact, one of the feeblest novels we have encountered for many a day.
-  The Speaker, Volume 11 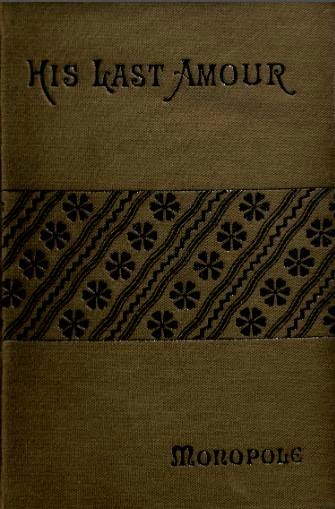 This variability of impression made me want to check it out. It turned out to be findable as a PDF via the British Library catalogue: His Last Amour. [A novel.] By Monopole. I've read it quickly, and it's not very good; while the writing is competent enough, the motivations are indeed unlikely.

It's basically a romantic melodrama, kicking off from the situation of a small-town lawyer, Charles Campbell, being trapped by the consequences of his dishonesty. Two sisters, Nellie Leeson and Dora Cartwright née Leeson, daughters of the aged and miserly industrialist David Leeson, come to Campbell's office asking for a loan of £1000 (Dora is in penury, having been disowned by Leeson for marrying Campbell's clerk, and she needs the loan to repay money her husband has embezzled). Campbell doesn't have the ready money, but feels he has to come up with it to safeguard his son's impending marriage to the rich heiress Nellie, so he gets it by falsifying a mortgage transaction. David Leeson gets wind of this in a chance conversation with a party in the transaction, and uses the fact to blackmail Campbell, his price for silence being marriage to Campbell's daughter Valerie. This sets the scene for Valerie's troubles. Read on, if you want...

The novel has a number of problems. A major issue is that Valerie doesn't escape her predicament by her own devices, but by a deus ex machina from an unconnected sub-plot.  Leeson keeps a mistress, Lucy Grant, in a nearby village, and tries to pay her off so that his marriage to Valerie can go ahead. They get into an argument when Lucy refuses to give him back incriminating letters, and she accidentally falls on a pickaxe and dies. Leeson conceals the body in a sewer. However, a high tide reveals it, and she is assumed to have been murdered. Leeson panics on reading in the newspaper that the police have a clue to the murderer, and poisons himself with laudanum. Except for a pointless diversion when Valerie keels over with a near-fatal fever from all the preceding drama, that about wraps up the story.

Stylistically, His Last Amour is very dull, with large amounts of exposition and stilted dialogue, and very little descriptive colour or sense of place (the only specific is that one location, Tremar Castle, is by "one of Hampshire's small and quiet rivers"). However, when you know it's by an Isle of Wight author, you start seeing names clearly rooted in that: Duke of Yaverland, Niton Heath, Niton Church, the surname Leeson, and the tract of land called the Duvver ("duver" is an Isle of Wight dialect term for an area of sand dunes).

None of this, however, gives the least clue to who the author "Monopole" was. (I assume the pseudonym was inspired by Heidsick's trademarked champagne term - nothing to do with magnetic monopoles).