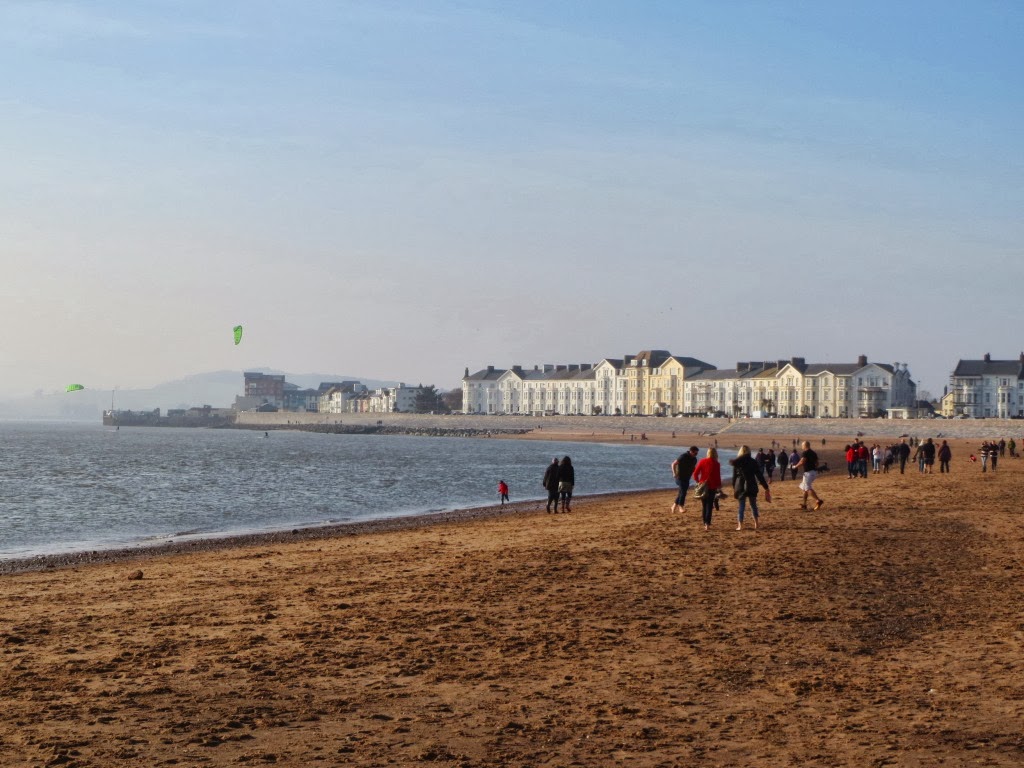 It was a beautiful and mild afternoon yesterday, so we went for a shop and a potter in Exmouth. It was a good excuse to check out a spot mentioned in the Exmouth Journal on Tuesday February 18th: Storms reveal Napoleonic sea defences on beach. As the news item explains, the recent weather heavily eroded the sand dunes along Exmouth seafront, exposing masonry that was part of the old Exmouth Artillery Battery, an gun emplacement dating from the early 1860s. 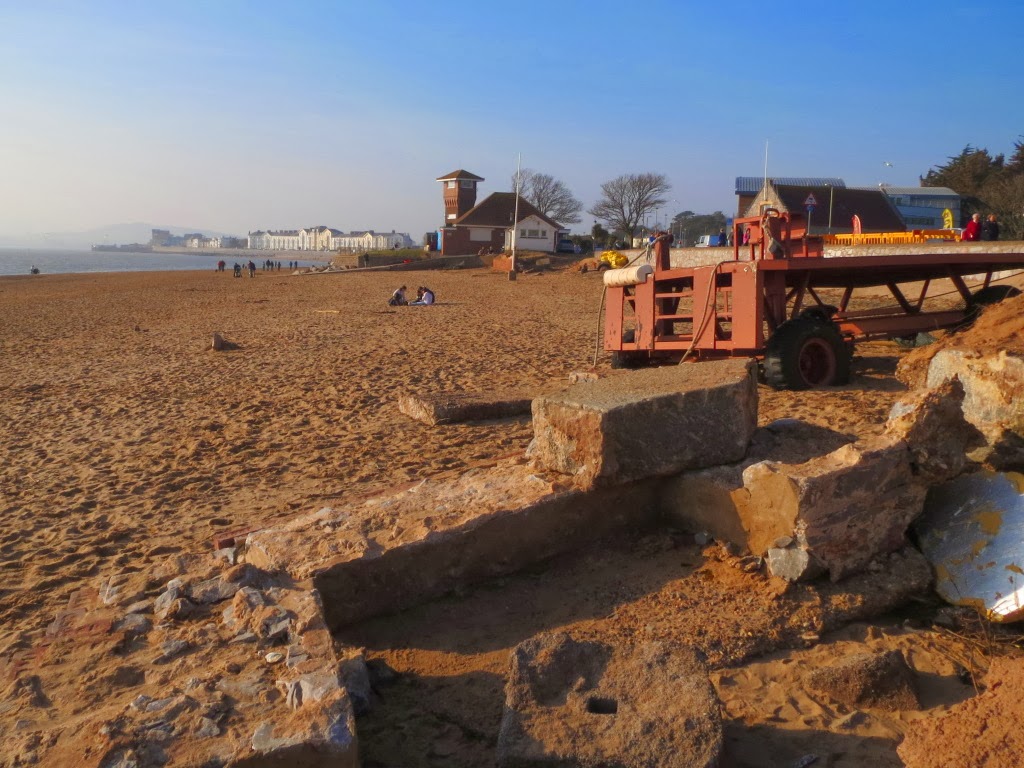 The spot is by the Stuart Line Cruises kiosk and moveable jetty, adjacent to Queens Drive. The original placement of the masonry isn't clear, but it includes, variously, a brick and concrete base, portions of brick pillars, a segment of a curved stonework turret, and some large annular segments of dressed granite. 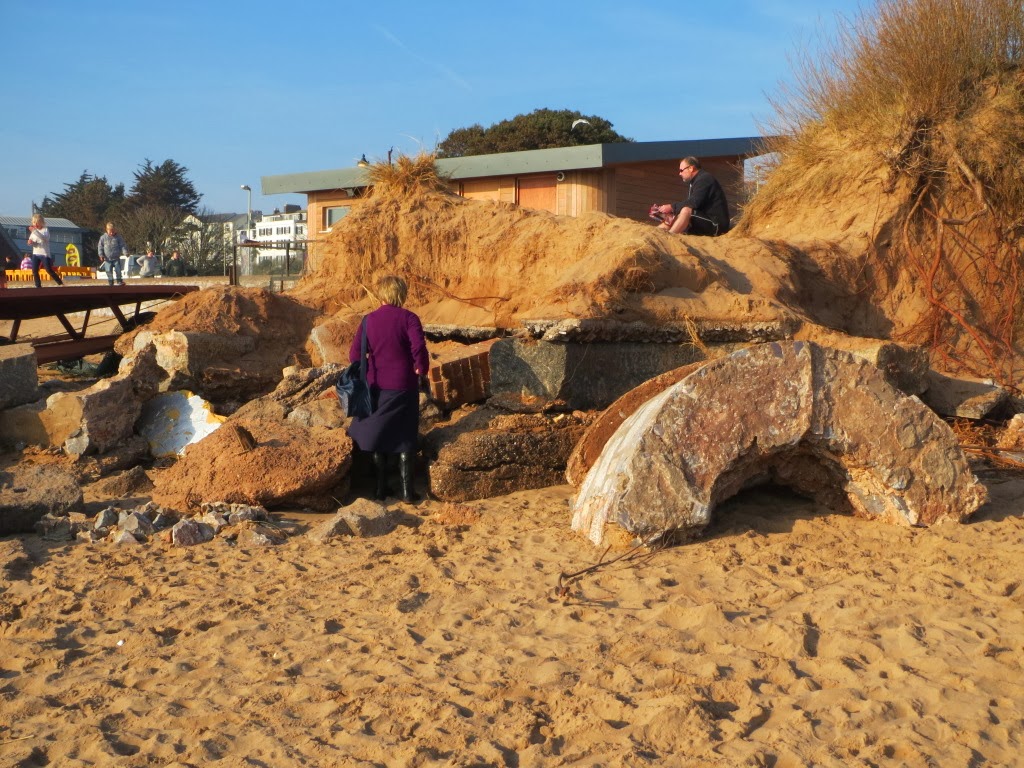 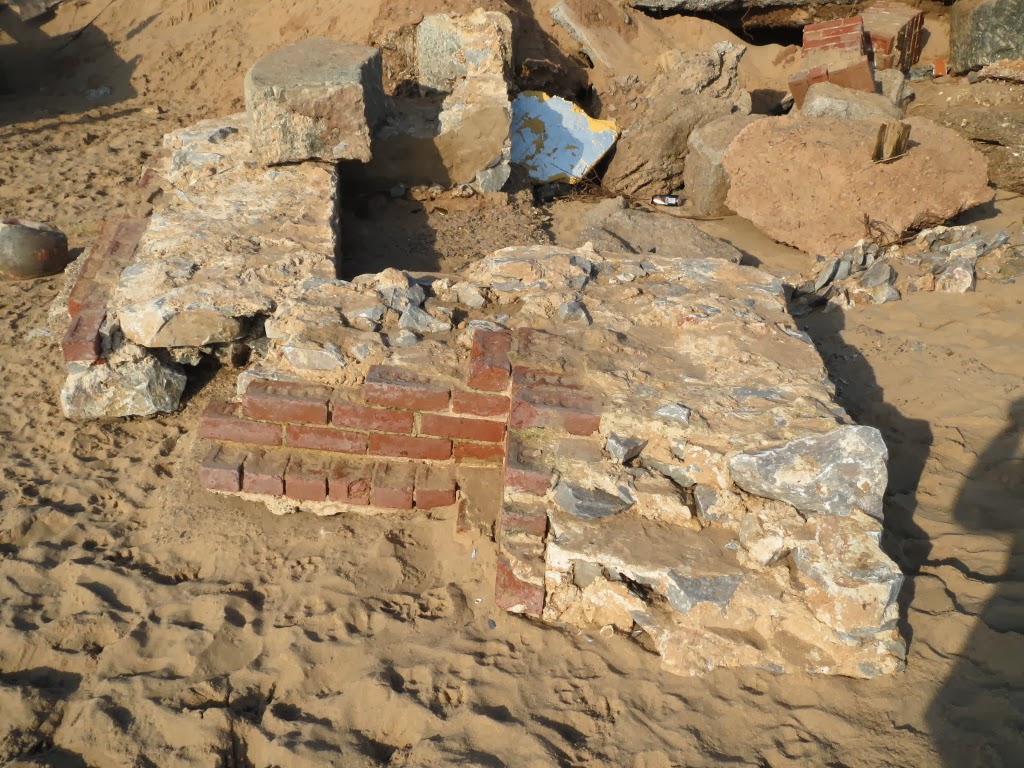 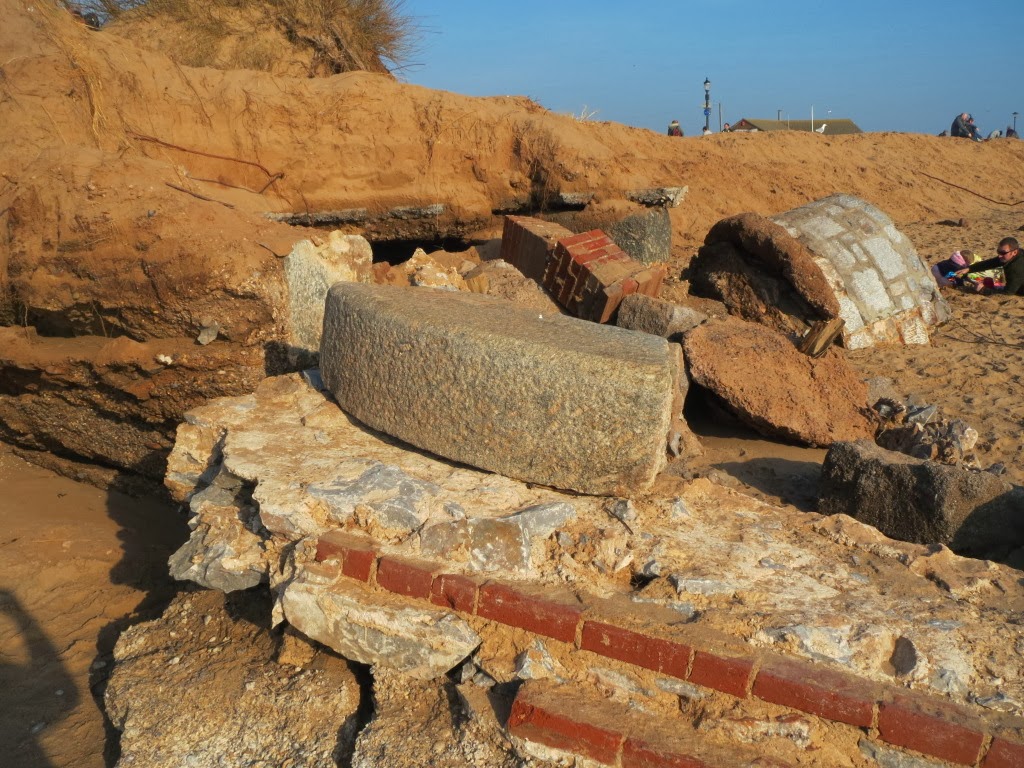 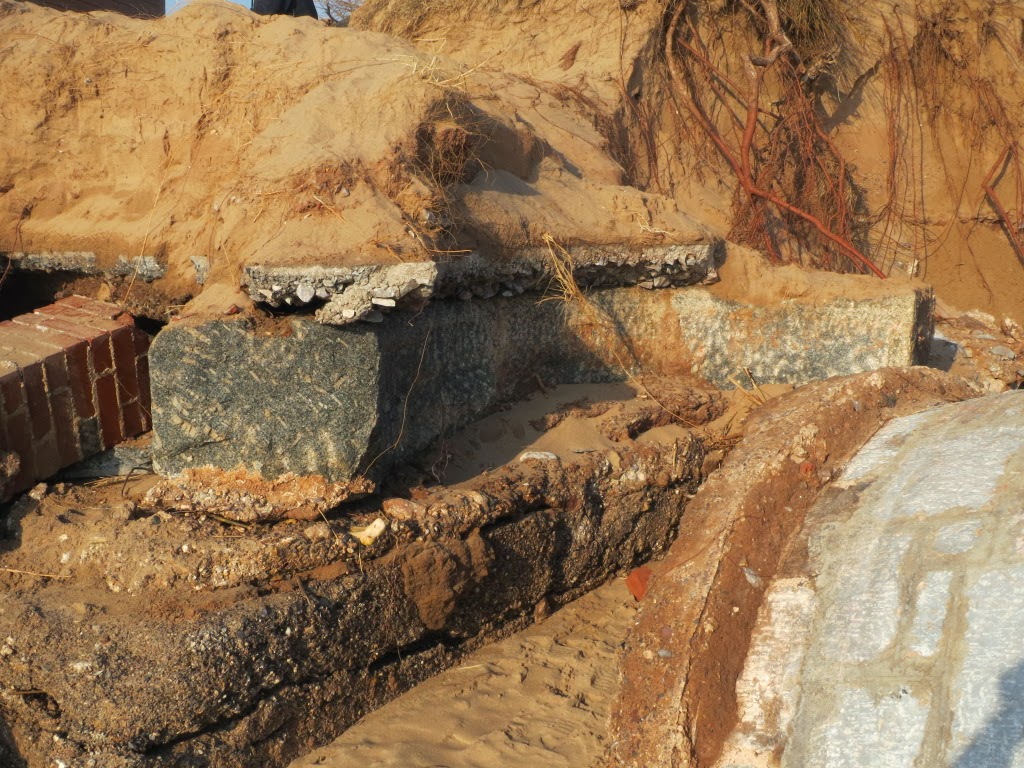 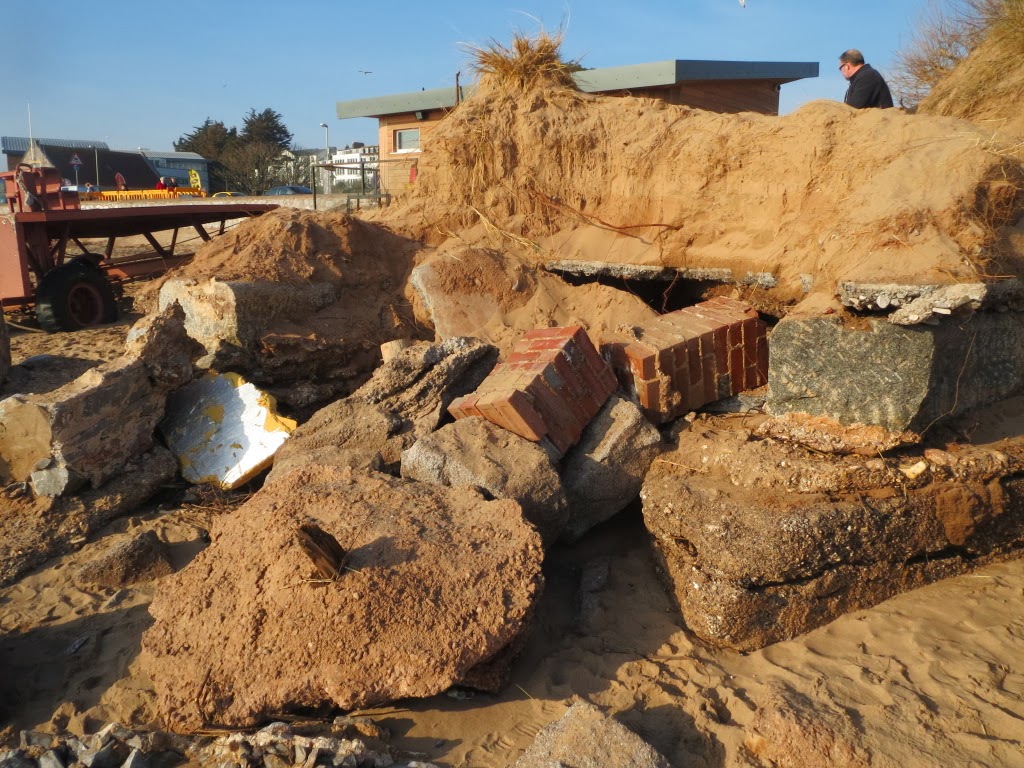 The battery is mentioned in a number of accounts, notably William John W. Webb's 1872 Memorials of Exmouth (republished in 1885 with the author renamed William Everitt). Its history is summarised in the Heritage Gateway entry:


A fort is marked on an Admiralty chart of 1887. This presumably represents the battery built adjacent to the coastguard station in 1862, which is described as being of quadrate form, with three embrasures and enclosing a bomb-proof magazine and a battery keeper's dwelling. It contained three thirty-two pounder guns and one eight inch mortar, and was used by the Exmouth Volunteer Artillery. It is said to have been demolished in the 1920s, or in 1908 leaving only the storeroom. The fort is shown on the OS map of 1890(Fig. 6.6), including a rectangular area adjacent to the west. The embankment had been reduced by 1905 (Fig. 6.7), although a further structure is depicted within the south end of the fort. Both maps show associated boundary stones. By 1920 Marine Drive had been built, seemingly over the northern part of the fort, and of the remainder only the late southern building is shown, amongst a line of boathouses (Fig. 6.8). Four large granite stones, believed to have been the boundary stones, were exposed in the sand in 1989 and placed alongside the lifeboat station. Remnants of a stone structure were visible in the sand to the south of the road at the time of the site visit.
- Gent, T. + Manning, P., 2013, Draft Environmental Statement on Land off Queens Drive, Exmouth (Un-published) - quoted at Devon & Dartmoor HER / MDV55242 / Fort at Exmouth

This looks a topic that might be worth pursuing in Exmouth Museum, which re-opens in April. In the meantime, I had a go at identifying the location of this masonry in relation to past structures.The battery did exist in the very early 1900s - the structure at far left in this 1905 Frith postcard, which also shows the now-demolished Coastguard Station.

Now knowing where to look, I made a couple of orthocorrected images correlating a present-day Google Map ...

... with Old Maps images.The 1889 map shows no details of the Battery buildings (perhaps they were omitted for strategic reasons) but is of considerable interest in showing the overall shape of the Battery. It becomes clear that the term "quadrate" in the historical description is in the obsolete sense of "a quarter of a circle" (see OED), reflecting the general firing direction intended: to defend the navigable channel into the mouth of the Exe, which runs more or less parallel to the shore. The relative location of Coastguard Station, on what's now a boating lake, is also clear (despite the changes, many of the land boundaries are preserved). 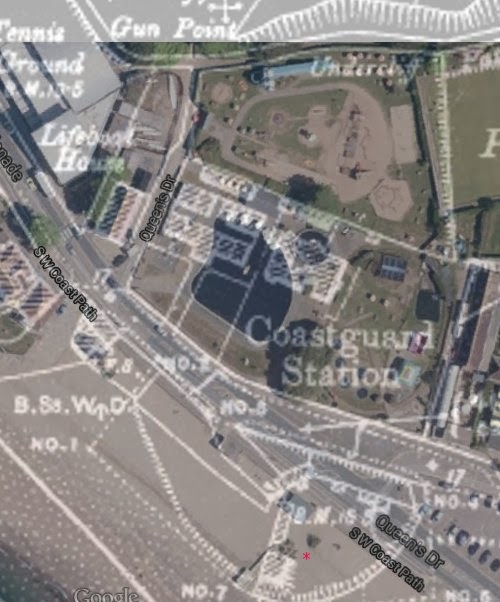 The 1906 map shows some of the buildings; the asterisked location seems to be at the corner of the southernmost.

This was the longest-surviving trace of the Battery; even after the rest of the installation had been effaced, the base of this building remained as a prominent 'tump' on the beach, as shown in this 1932 image from the Britain from Above aerial photo website. The tump is just to the left of the large white marquee by the beach huts.


The spot is now marked by a tussock of vegetation by the Stuart Line Cruises kiosk (Tiger Charters as was):
View Larger Map

Addendum: I took a few more shots showing the layout. An interesting indicator of date: many of the bricks are imprinted "1861". 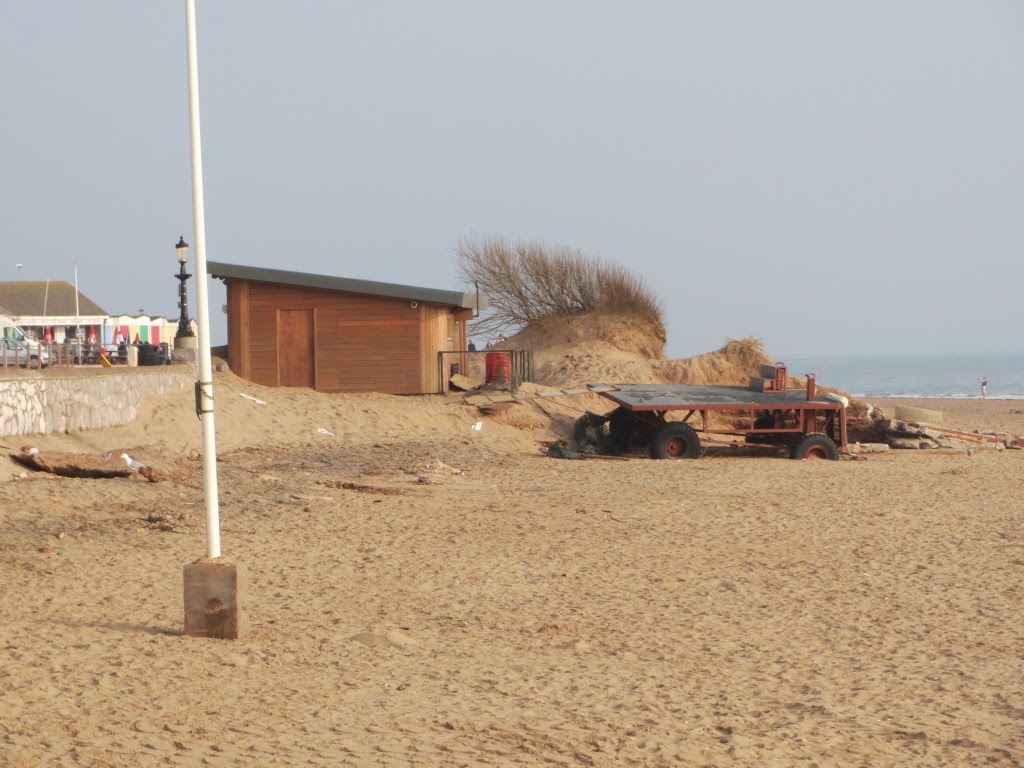 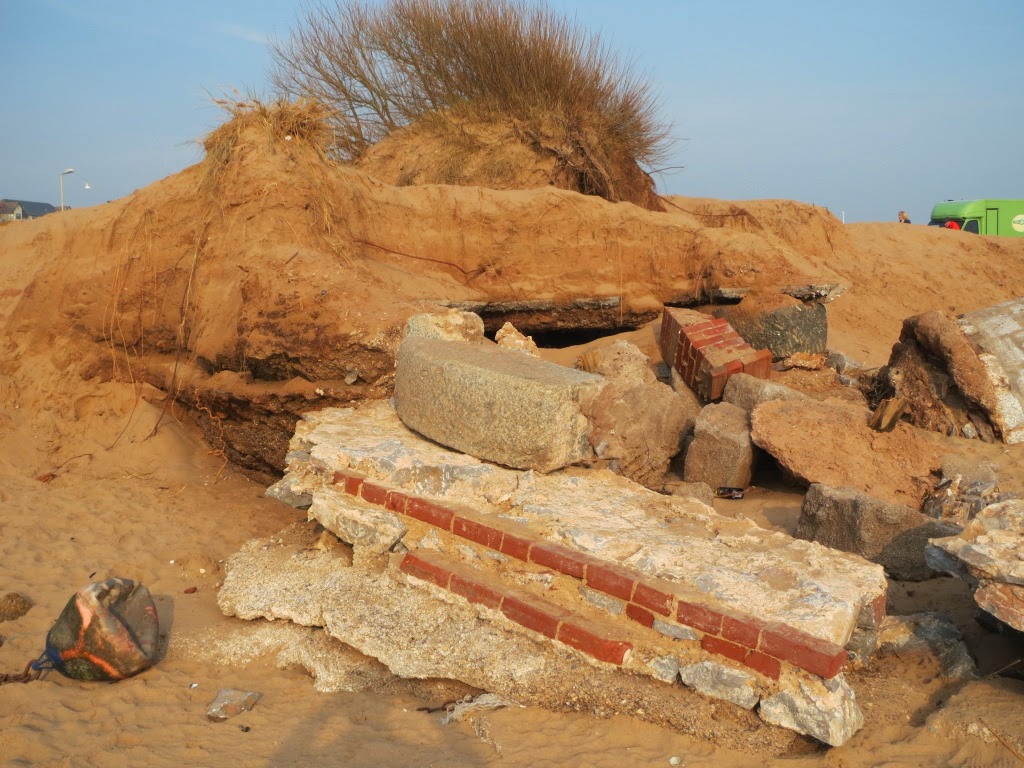 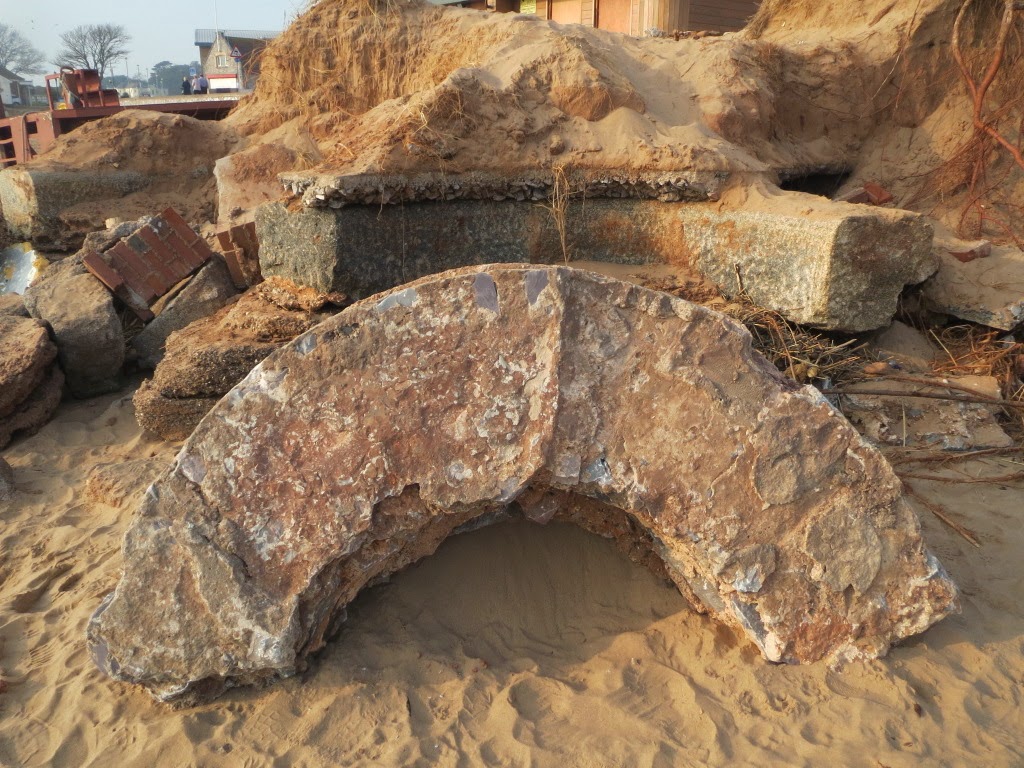 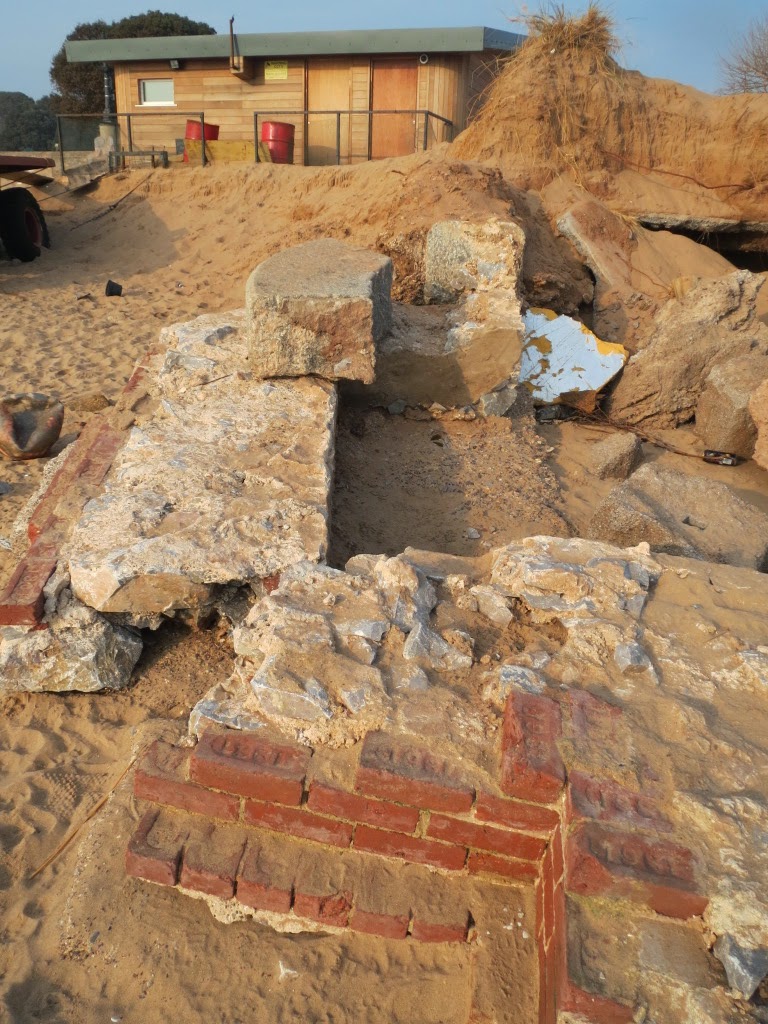 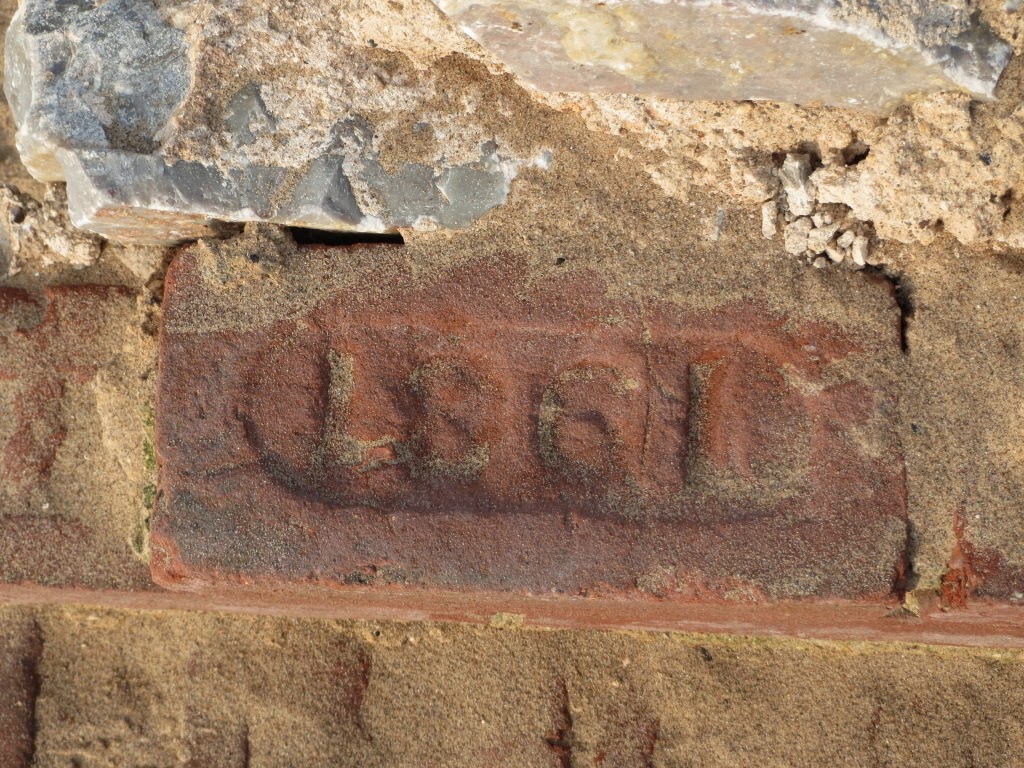