Parson's Tunnel and The Ocean Sleuth

I think Network Rail are missing a trick; a lot of people (me included) would be very happy to pay £10 to don a hard hat and walk through the Brunel tunnels on the currently unused South Devon Main Line between Dawlish and Teignmouth. However, we'll have to make do with a fictional account in the 1915 crime thriller The Ocean Sleuth.

I've mentioned The Ocean Sleuth a couple of times as having regional interest; the author, Maurice Drake, was from Exeter, and a distinguished expert on stained glass as well as a novelist (see Maurice Drake and WO2). Part of the mystery of The Ocean Sleuth hinges on the switch of genuine and forged banknotes when a train stops briefly in the Parsons Tunnel at Dawlish, despite nobody leaving the train. A couple of chapters focus on the Dawlish-based explorations of the protagonist, the journalist Austin Voogdt (the "Sherlock of the Sea", as he's called in the title of the original six-art serialisation), as he investigates how the switch was done. There are some accurate descriptions of the coastline.

The train turned out beside the sea between Teignmouth and Dawlish, and in that moment I saw where that change might possibly have taken place. Down went the window, and out went my head. I was all alive and keen on the hunt.

The day had cleared, and the afternoon sun shone on a cold bright sea. As the train rounded the curve past Teignmouth breakwater, we brought in view the Parson and Clerk promontory, its red walls pierced at the base by the little black aperture of Parson's tunnel, a signal box standing by its entrance. In there Bossard had stopped the train, and there I could have sworn lay the answer I was seeking, if only I could get at it and read it. With a scream and a clatter we dashed in, were half a minute in darkness, and emerged on a vista of more red cliffs and sea. Pop, in we went again, into another tunnel, and out again, almost before one realized that the daylight had been eclipsed for a moment. In again, and out again ; and in and out again. . . .

But I noted little of the string of tunnels, for I was thinking hard. Why was I going on to Paddington? To see Pamela West and hear her say Marguerite couldn't be a thief. Well, I knew that myself : the job before me was to prove she wasn't, so that all the world might know it too. And here or hereabouts, I felt sure, lay the key to the puzzle. Call it impulse, foolishness, what you will, I felt sure of it. Before we were clear of the last of the five tunnels, I was on my feet collecting my baggage, and when the train drew out of Dawlish station, it left me standing on the platform.

It had never occurred to me that there could be any serious difficulty in inspecting the tunnel. In my mind it had seemed a simple thing to climb a fence, get on the permanent way, and stroll through the tunnels at my leisure. One might encounter a plate-layer or the ganger on duty, but a shilling or two would go far towards inducing them to look the other way whilst I passed. In fact, the thing looked so absurdly easy that I was inclined to doubt its utility — as one does doubt the value of things too easily come by.

Standing on the platform at Dawlish, it looked easier than ever. On one side lay the town, a quaint jumble of houses, old-fashioned and new, facing each other across green lawns and a stream, and on the other side the deserted beach with bathing-machines hauled above high-water mark, and wintry gusts crisping the leaden water with dark cat's-paws racing off shore. The railway ran between the sea and town till it reached the cliffs and dived into the first tunnel. The promenade was as empty as the beach. It looked as though all I had to do was to step off the platform and walk straight along the line to my destination.

As a matter of fact, it took me five days before I could set foot on the permanent way, and then only by accident and at the risk of a broken neck. And no sooner had I got there than I was as promptly escorted off again.

Having deposited my luggage in the first hotel I came to — a deserted barrack of a place, close to the station — I took a stroll along the promenade to spy out the land, and very soon discovered it wasn't going to be as easy a business as I had thought. Just to the west of Dawlish station the line narrowed to a single track, and skirted round a promontory of the land, from which, like fingers on a hand, projected five smaller headlands. Through each ran a tunnel : the two nearest Dawlish each perhaps a quarter of a mile long, and straight as a dart. Then came two smaller ones — mere rocky arches — and between these four lay little sandy beaches, the first accessible by a path from Dawlish. Past the fourth tunnel, the cliff came sheer down to the sea, the line curving round it on a stone-built sea-wall at its feet. Once round the curve, it pierced the largest of the five headlands, a mighty mass of soft rock ending in a gigantic and grotesque redface. This face stared seaward at a detached obelisk isolated in the sea, its feet black with seaweeds and its summit white with sea-birds' droppings. The headland and its obelisk are not inaptly named the Parson and Clerk rocks, and the tunnel piercing its base — the longest of the five, and so sharply curved that from neither end can any gleam be seen of the daylight entering at the other — is known to railwaymen as Parson's tunnel. The whole headland is steep and precipitous to the water's edge, the last sandy beach stopping short to the eastward of the fourth smaller promontory, so that only a few heaps of tumbled rock, dislodged from the heights above them, and black and slippery with bladderwrack, show when the tide is low about its feet. At the Teignmouth end of the tunnel the Parson's tunnel signal-box stood sentry by day and by night, and nowhere between the signal-box and Dawlish station was there any place where a strange foot could possibly intrude upon the line.

I spent three whole days spying out the district, and the longer I looked the more difficult it appeared. From Dawlish station to the first tunnel, the line was guarded by a six-foot spiked iron railing, and moreover was in full view of the station and the houses facing the promenade. In the little sandy coves between the first four headlands a twenty-foot wall of smooth stone, curving outwards at the top, made an insuperable obstacle. Hiring a boat, I rowed all round as far as the Parson's signal-box, only to find the wall went all the way between the tunnels, and that where it met the sea it was even higher and more inaccessible than in the coves.

On the land side things looked little better. From the valley in which lies the town of Dawlish the cliffs rise, higher and ever higher, to the Parson and Clerk promontory. The lower cliffs as far as the fourth tunnel were separated from the road by villas surrounded by walled gardens and spiked fences, and by the time these gave way to meadow-land, the railway was out of reach, a hundred and fifty feet below. Moreover, the cliffs were soft stuff, a red conglomerate, more like hard mud than rock, and the railway engineers had cut their bases back till they stood nearly as upright as the side of a house. It was almost attempting suicide even to peer over the edge of the crumbling stuff at the curving silvery metals far below.

Worst of all, the line seemed never to be deserted. Whenever I looked down from the cliffs or up from the sea, there always seemed to be some one patrolling the metals — if not platelayers or the ganger in charge of the section, some signalman going to or from his work at the tunnel box. Whether Bossard's escapade had any bearing on Schofield's flight or no, it was certainly a funny thing that when stopping the train he should have chanced on about the most inaccessible place in all the two hundred odd miles between London and Plymouth. 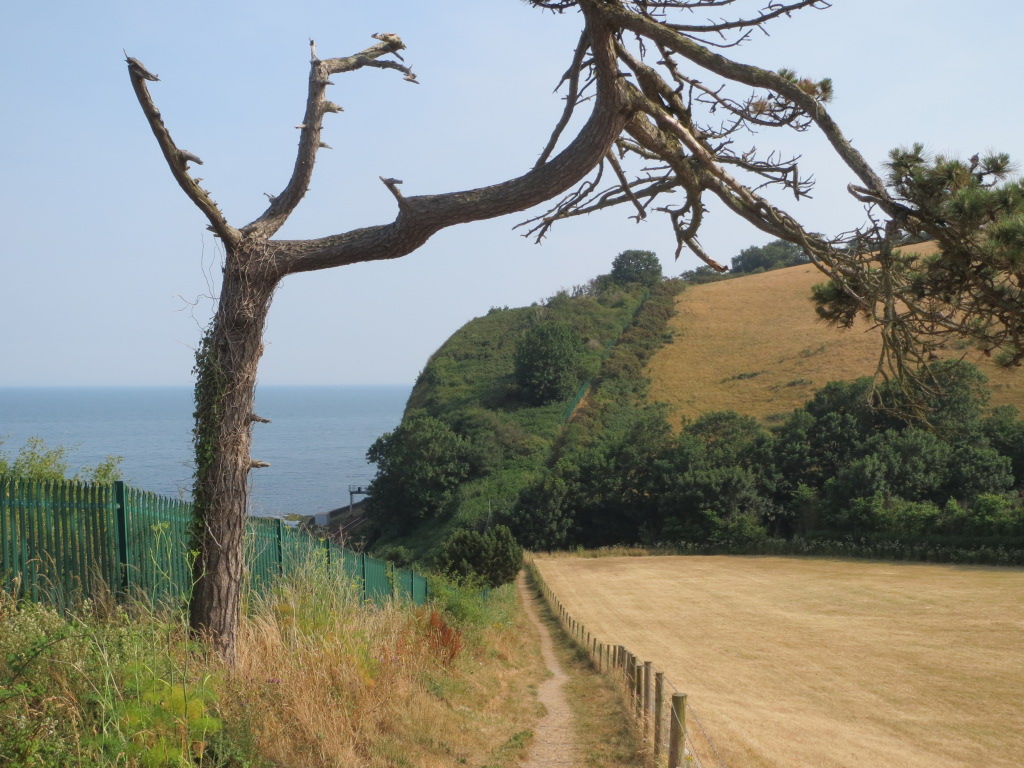 In the end, it was by pure accident that I got on the line at all. Walking homewards late one afternoon across the meadows above the high cliffs, I discovered that near the last of the villas they sloped down into a little valley, along which ran a sluggish stream. Following its course until it reached the cliff, here lowered by this valley-level to no more than about sixty or seventy feet high, I found the stream had cut a steep sloping gutter in the soft rock. It was growing dusk, and had I been wise I should have waited till the next day to pursue my exploration. Instead of which I got into this precious gutter up to my armpits, stamping about with my feet to try if it would give safe foothold. I soon learnt. A stone or two gave way beneath me ; a frenzied grasp at the wet rock only yielded handfuls of soft mud and grass roots ; and sliding and stumbling, sometimes head first and sometimes following my feet, I rolled down the full length of the gutter, my heart in my mouth, writhing and struggling in the endeavour to stop my career before I was launched over the edge of the cliff.

Fortunately for me, the gutter had cut its way very nearly down to the railway line, and a final somersault over an easy slope of debris brought me on to the permanent way. Wet through, and smeared to the eyes with clay, I landed with a bump that shook the last breath out of my body, nearly knocking over a platelayer who was patrolling the line, a lantern in his one hand, and a long hammer in the other.

I don't know which of us was most surprised.

If you want to find what happens next, read The Ocean Sleuth (Internet Archive oceansleuth00drakrich). 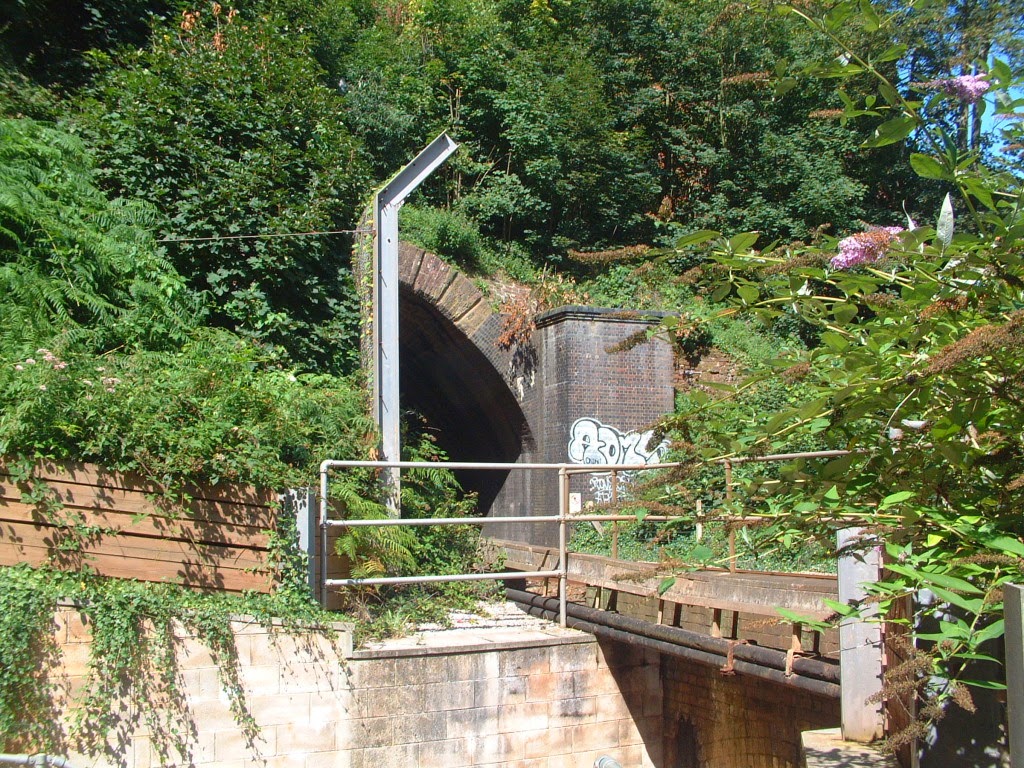 I'm not sure if Drake is exaggerating the inaccessibility of the railway. At least when I visited Shell Cove in 2007 (by wading round from Coryton Cove at low tide) the line was evidently accessible - judging by the abundant graffiti - in the vicinity of the entrance to the Coryton Tunnel, where the private track from Shell Cove House goes under the line. Perhaps there was less undergrowth in 1915, or else Drake just didn't want to make it too easy for his hero.

The Ocean Sleuth is, incidentally, a romance as well as a crime mystery, with much tension involving the protagonist's moral dilemma when he finds the mysterious young Breton woman he loves is connected with the crime. 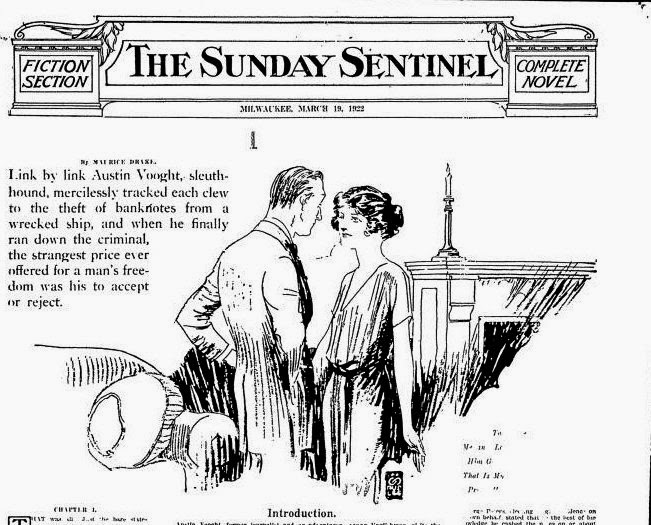 "Link by link, Austin Vooght, sleuth-hound, mercilessly tracked each clew to the theft of banknotes from a wrecked ship, and when he finally ran down the criminal, the strangest price ever offered for a man's freedom was his to accept or reject"
- blurb for Milwaukee Sunday Sentinel syndication of the novel, as Sherlock of the Sea, Sunday March 19th, 1922.